A photo of a young man, his arms raised while down facing nine soldiers on a street, was posted multiple times on Facebook and Twitter on 13 February 2021, with the claim it shows a protester at the Lekki tollgate in Lagos, Nigeria.

Each post has the same caption: “#Lekkitollgate If I Don't Fight This Injustice Now, My Children Will Blame Me For Ignoring My Civil Right To Speak Up For Justice #EndSARS.”

The photo was first posted here, and has had hundreds of retweets and reactions.

The hashtag #EndSARS refers to the Special Anti-Robbery Squad (Sars), a notorious unit of the Nigerian Police with a long record of abuses. For years, Nigerians have demanded that the unit be disbanded. Amnesty International has recorded 82 cases of torture, abuse and extrajudicial execution by Sars officers.

The decentralised #EndSARS movement started as a Twitter campaign in 2017. In October 2020, after more revelations of abuses by the squad, mass demonstrations were held in many major Nigerian cities, accompanied by vocal outrage on social media. 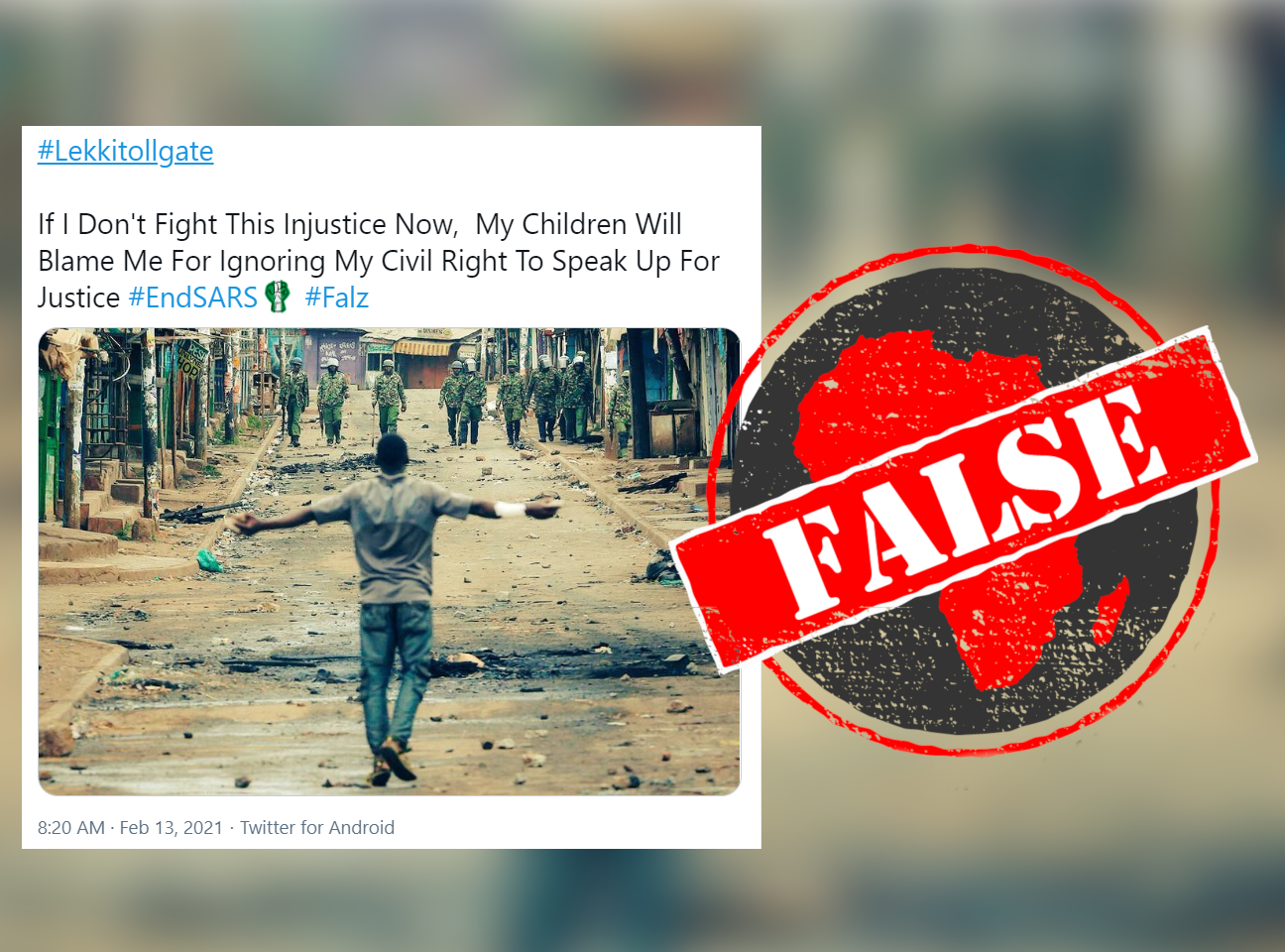 On 20 October 2020, the Lagos state governor Babajide Sanwo-Olu declared a 24-hour curfew across the state after the destruction of government property during the protests. But many protesters defied the curfew, especially in Alausa and at the Lekki tollgate, where people waved the Nigerian flag and sang the national anthem.

On the night of 20 October, news that the Nigerian Army had opened fire on protesters at the Lekki tollgate flooded social media. The attack was filmed in a live Instagram stream by popular disk jockey Obianuju Udeh, known as DJ Switch.

The tollgate was closed after the shooting as Sanwo-Olu swore in a judicial panel of inquiry into Sars human rights abuses.

But on 6 February 2021 the panel approved the reopening of the Lekki tollgate, a move condemned by many. #EndSars activists said they were ready to occupy Lagos again on 13 February – and the photo started circulating on social media.

But does it show a protester at the Lekki tollgate in 2020?

A reverse image search of the photo led Africa Check to an LA Times slideshow of images of election protests in Kenya in 2017. It was also published in the Times on 12 August 2017, with the caption: “A supporter of the opposition leader Raila Odinga faces off against riot police officers during a protest in Nairobi, Kenya.”

It is credited to photographer Dai Kurokawa of the European Pressphoto Agency.

The Times article is headlined: “Kenya election: 24 killed in riots as Kenyatta claims victory in ‘rigged’ vote”. Uhuru Kenyatta had been declared the winner of the presidential election, amid opposition claims that the vote was rigged.