A graphic shared on Facebook shows a black-and-white photo of kneeling man, clasping a small crucifix, while a man dressed as a priest in a long black robe bends down to speak to him. Heavily armed men look on.

Text above the photo reads: “This picture won the Pulitzer Prize in 1960. It shows a priest giving the last rites to a Cuban farmer, owner of his land. He refused to work for the Castro regime. He died by a firing squad after a ‘trial’ by Che Guevara that lasted 4 minutes. You will never see this picture on a T-shirt.”

The caption refers to the photos of Che Guevara often reproduced on t-shirts. Guevara was an Argentinian communist who was prominent in the Cuban revolution of the late 1950s and other leftist guerilla campaigns in South America.

The graphic is also shared here and here. It was flagged as possibly false by Facebook’s fact-checking system after it was posted in South Africa.

But is this the true story behind the photo? 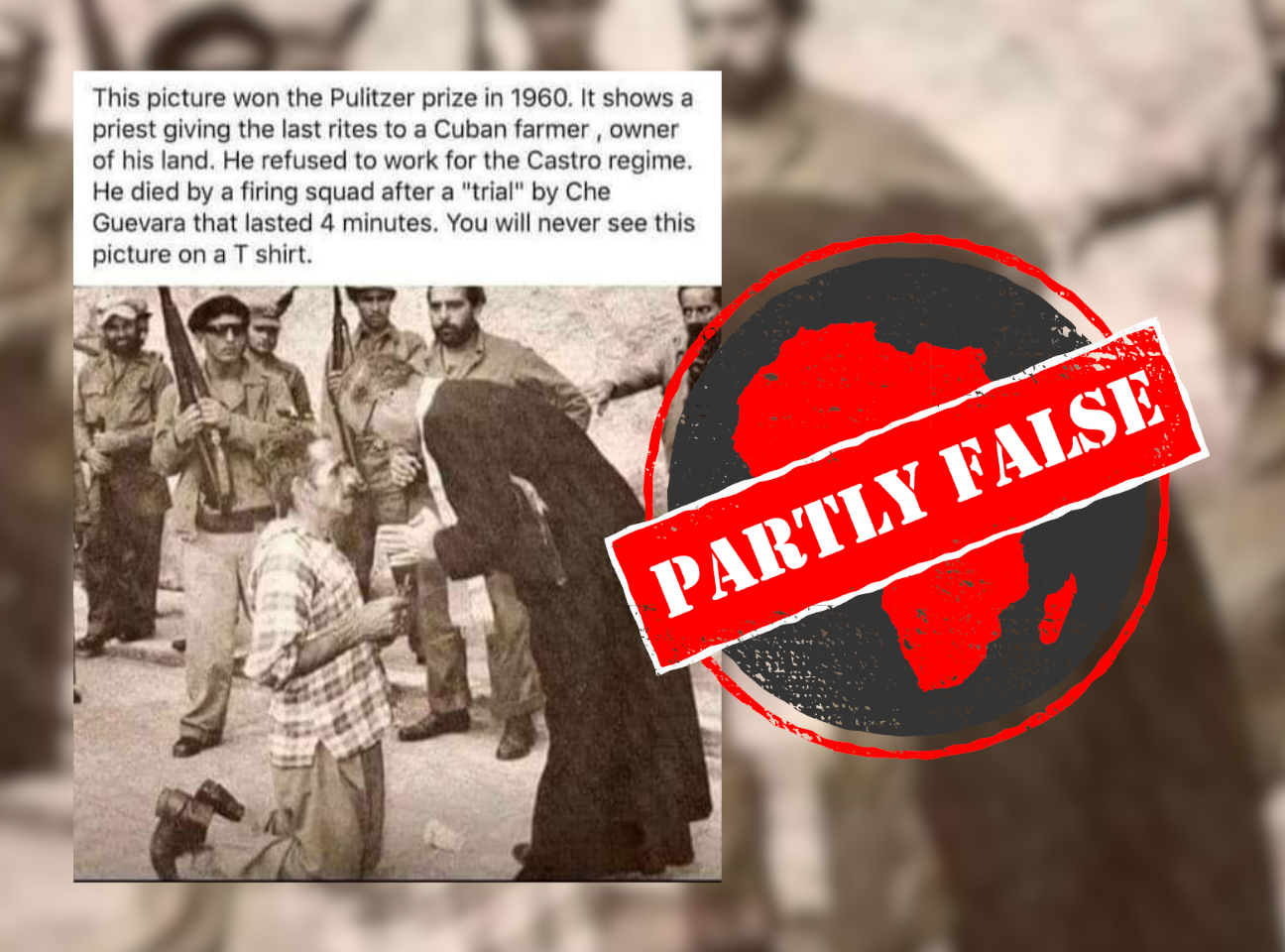 An online search for the phrase “photo that won Pulitzer prize in 1960” reveals that the image did win the Pulitzer Prize for photography in 1960 – or rather, the photographer Andrew Lopez won the prize for the photo.

The Pulitzer prizes are prestigious annual awards in 21 different categories across journalism, literature and music given out almost exclusively to US citizens.

The caption to the photo on the Pulitzer website says that the man in the photo was a former corporal of “Batista’s army”. He was receiving his last rites before his execution, a Catholic ritual performed by a priest before death.

Fulgencio Batista was a dictator who ruled Cuba twice, for the second time between 1952 and 1959. An army under Fidel Castro and Guevara fought and eventually won against Batista’s rule.

These details about the photo were repeated on the Pulitzer Prizes Facebook page on 1 December 2016 when they republished the photo. The caption adds that the photo was taken “moments before he is to be executed by a Fidel Castro firing squad”.

According to United Press International (UPI), who Lopez worked for, the famous photo was taken on 17 January 1959. They also add details about the man executed, Jose Cipriano Rodriguez.

UPI say: “Rodriguez, who had served in Fulgencio Batista's army, was executed by firing squad after being found guilty for the deaths of two brothers. His tribunal lasted just one minute. UPI photographer Andrew Lopez won the 1960 Pulitzer Prize for a series of four photos from the scene, including this one.”

None of the sources we found mentioned that Guevara was directly involved in Rodriguez’s tribunal. And Rodriguez was a senior military officer, not a farmer. But he was executed by Cuban communist forces, after they defeated Batista’s army.