A graphic shared on Facebook in South Africa includes three photos of an explosion, under the headline “Ukraine. The exact same explosion, 7 years apart …”.

The first looks as though it is a screenshot of a CNN broadcast, with two people and a dog silhouetted against the explosion and a banner that reads “Firey but mostly peaceful explosion in the Ukraine”.

The other two photos in the graphic appear to show the same explosion, with one labelled “Esplosione Ucraina 2015”, Italian for “Explosion Ukraine 2015”.

Conflict between Russia and its neighbour Ukraine stretches back to 2014. But on 24 February Russia launched a massive new invasion. This aggression has dominated world news and seen over a thousand civilian casualties and reports of more than 1.7 million people fleeing the country.

The implication of the graphic seems to be that the US-based news network CNN is falsely reporting on Russia’s invasion of Ukraine, claiming a photo from 2015 shows an explosion in 2022.

But what do these photos really show? 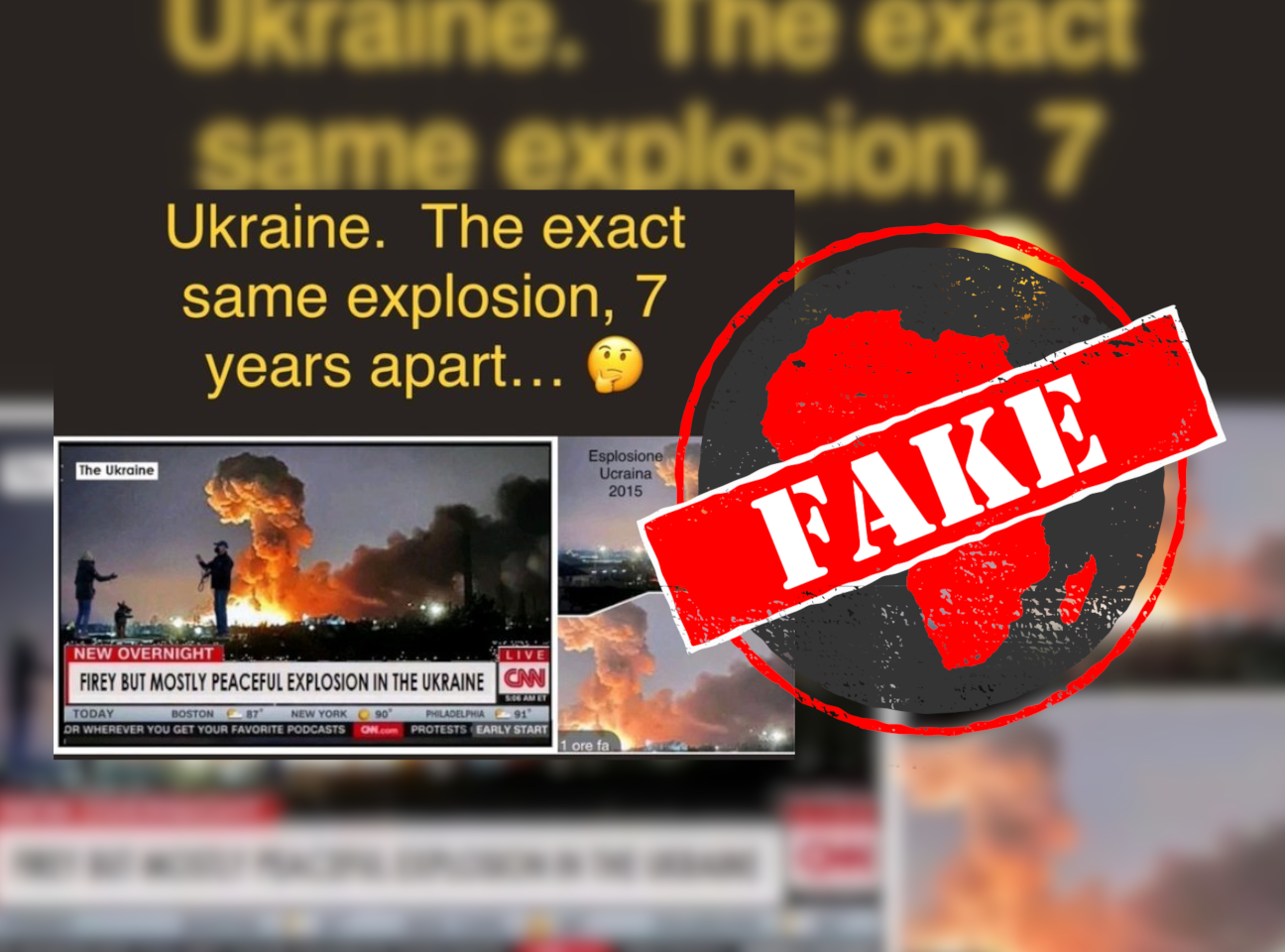 Explosion during current conflict, not 2015

A Google reverse image search of the first photo in the graphic led us to a devastating series of photos published by CNN in March 2022.

One of the photos matches the photo used in the graphic shared on Facebook.

It is captioned: “A photo provided by the Ukrainian President's office appears to show an explosion in Kyiv early on February 24.”

A number of international news organisations have reported on explosions in the Ukrainian capital Kyiv since the Russian attacks began. But we could find no similar reports from 2015 and no evidence the photo was published online before February 2022.

The two reports of explosions in Ukraine from 2015 we could find were about separate events, outside of Kyiv.

We could also find no evidence that CNN reported on anything like a “firey but mostly peaceful explosion in the Ukraine”.

The use of the phrase “the Ukraine” in the screenshot is also a clue that it is probably fake – the name of the country is “Ukraine”. “The Ukraine” is considered outdated and even insulting.

US president Joe Biden, his wife and dog

We also did a reverse image search of the people and dog in silhouette. And this returned a photo of current US president Joe Biden and his wife, published by AP Images in December 2021.

According to the caption to the photo, it shows first lady Jill Biden and Joe Biden walking their dog Commander in Rehoboth Beach in the US state of Delaware on 28 December.

The Bidens – and Commander – were photoshopped onto the photo of the explosion in Kyiv on 24 February 2022. The graphic is misleading.