Kenya’s next presidential election is set for August 2022, with the main contenders expected to be former prime minister Raila Odinga of the Orange Democratic Movement and current deputy president William Ruto, leader of the United Democratic Alliance, or UDA.

Ruto’s economic advisor is Dr David Ndii, a well-known Kenyan economist. In the disputed 2017 election, he supported Odinga’s bid for the presidency.

But on 7 December 2021, a rumour started circulating on social media that Ndii had resigned from Ruto’s team, dealing a blow to the deputy president’s campaign.

“David Ndii, the economist who coined the bottom up model for the DP has resigned as his advisor,” reads one message on Facebook. “This comes after much reflection and evaluation of the kind of person the DP is. On his letter he uses words like economic sabatour, conman and corrupt to describe him. They say a tiger never changes its stripes. Ndii just realized that.”

The message includes a document titled “Open Letter to the Deputy President William Ruto”. Seemingly signed by Ndii, it accuses the UDA of “conmanship” and “corruption”.

“Following a sequence of personal reflection and thought-provoking reviews, I wish to tender my resignation as your economic advisor,” the letter reads.

“Having originated the concept of bottom-up economic model, which seeks to uplift the proletariats, which was also in the NASA 2017 campaigns, I have come to realize that my position as UDA's economic strategist is untenable ...”

Another Facebook post says: “David Ndii has resigned as the Economic planner for UDA calling the DP a political conman.” Screenshots of this post have been shared by other users. The rumour, and letter, is also spreading on Twitter.

But has Ndii resigned? And is the letter genuine? 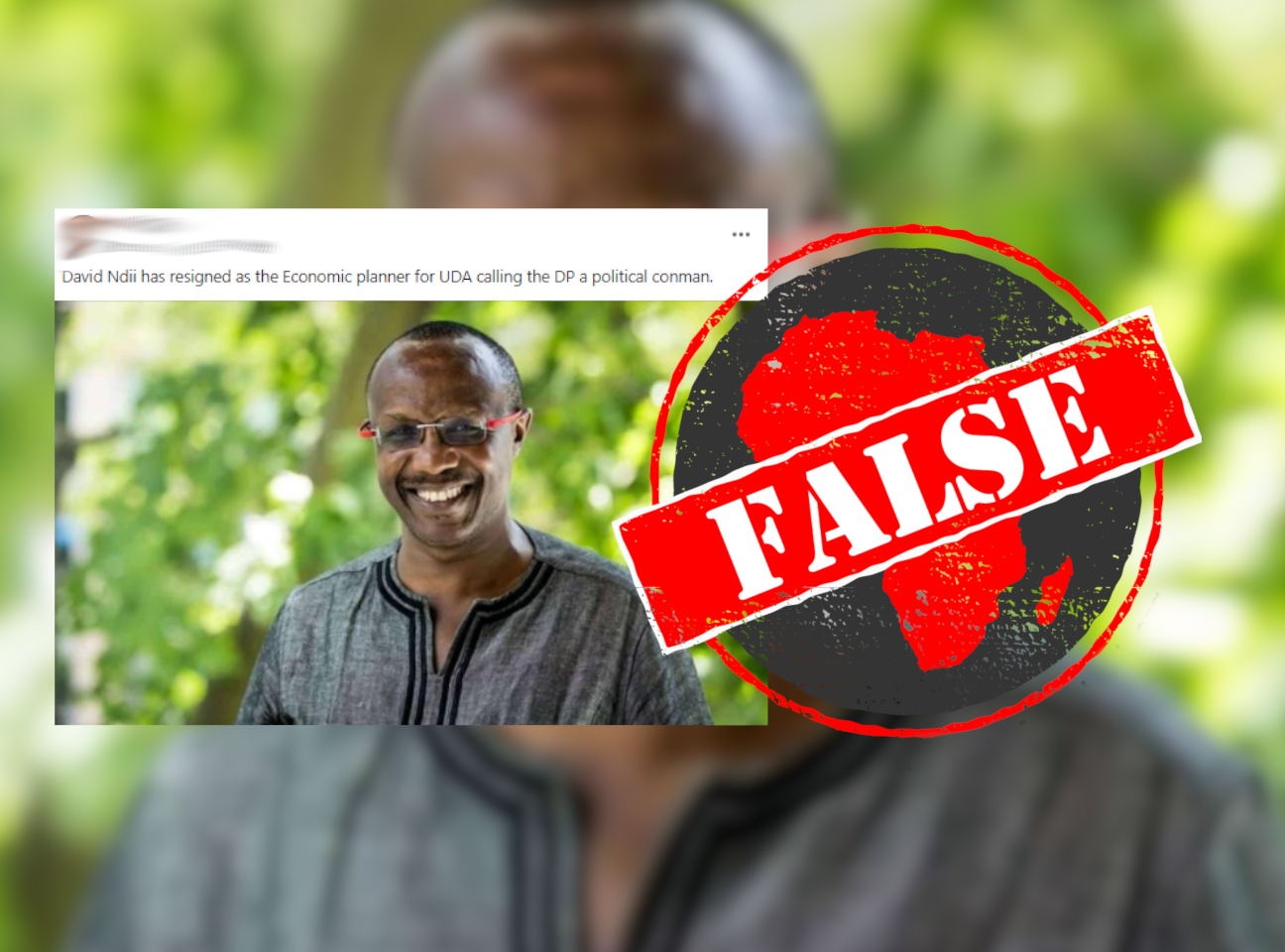 On the day the letter appeared, Ndii immediately denied that he had written it.

“This is the only open letter I have written recently,” he tweeted on his verified Twitter account. He attached a five-page open letter he had written to president Uhuru Kenyatta in March 2020, advising him to take urgent steps to protect Kenyans against the Covid-19 pandemic.

This is the only open letter I have written recently. pic.twitter.com/N5E3spr4aN

The letter was originally published on 25 March 2020 in the Elephant, a political news and debate website, days after the first case of Covid-19 was reported in Kenya. A search of Ndii’s Twitter account since March 2020 does not reveal any open letter authored more recently by the economist.

The letter shared on Facebook has an unusual spelling mistake below Ndii’s signature. The right bracket after the post-nominal “OXON” is missing. In his 25 March 2020 letter, and on Twitter, Ndii uses both brackets when abbreviating his doctoral qualification from the University of Oxford.

The letter in which Ndii supposedly resigns as Ruto’s economic advisor is fake.