Published on 12 June 2019
Former US secretary of state Henry Kissinger is a political adviser and diplomat who influenced the USA's national security and foreign policy from the 1950s to the 1980s.

Over the years he has given many speeches on the international stage, which can be read on his website.

Now a meme circulating on Facebook claims that in one speech, Kissinger made sinister statements about “forcible” vaccination, blood and organ donation, sterilisation and the genetic modification of children.

It was flagged as possibly false by Facebook’s fact-checking system, so Africa Check had a look.

‘The herd will accept anything’

One Facebook user captioned it: “Henry Kissinger in a speech to the World Health Organization Council on Eugenics Feb 25, 2009.” (Note: Eugenics was a discredited theory that people could be “improved” by methods such as selective breeding and sterilisation.)

The meme’s text continues: “Control sheep minds and you control the herd. Vaccine makers stand to make billions, and many of you in this room today are investors. It's a big win-win! We thin out the herd and the herd pays us for providing extermination services.”

But a Google search for phrases in the quote does not return any documented speech by Kissinger. It only produces similar claims.

And a search of speeches on his website for the quote or part of the quote also produces no results. 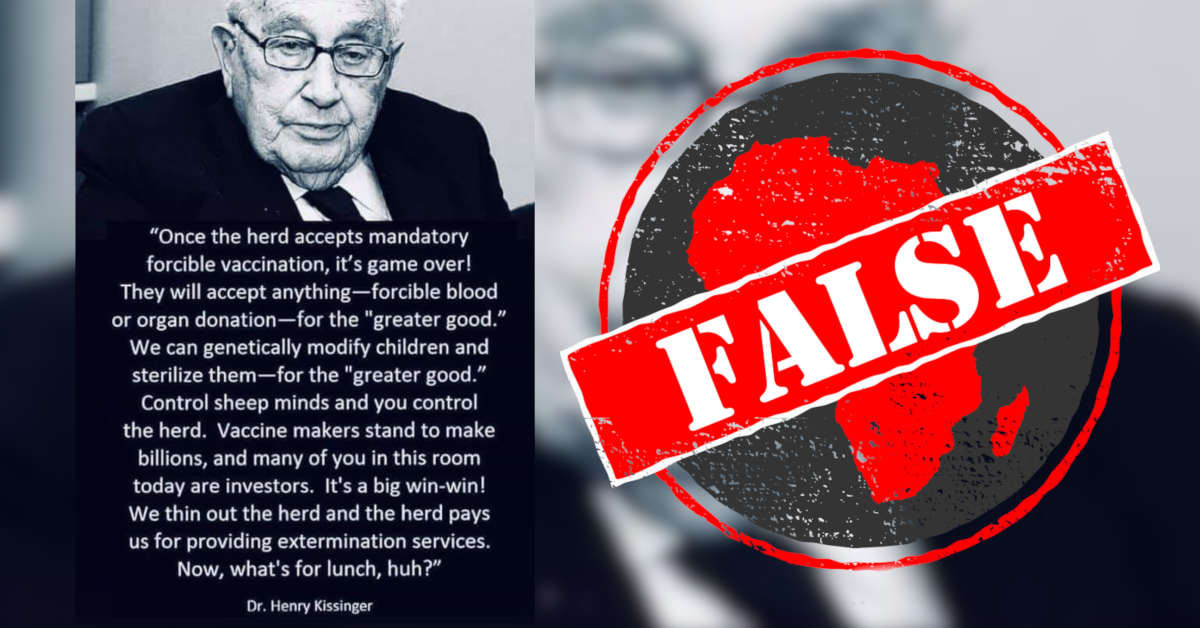 ‘No records or archives’ of speech

Africa Check contacted the World Health Organization (WHO) to ask if they were aware of any such speech by Kissinger.

Christian Lindmeier, a member of the WHO’s media communications team, said the council mentioned did not exist, and the organisation had no record of the speech.

“Firstly, there is no such thing as the ‘World Health Organization Council’ at WHO. Secondly, we have no records or archives of Dr Henry Kissinger making any such intervention at WHO,” he told Africa Check.

The quote has also been researched by Snopes and Check Your Fact, who both rated it as false. – Dancan Bwire

No, girl wasn’t turned into monkey for throwing away Qur’an

Hoax alert: No, WHO hasn’t warned southern Nigerians against eating beef from the north

No, Mswati didn’t decree men in eSwatini must marry at least two wives or face jail