This roughly translates as: “For the first time in the history of vaccination, the so-called last-generation mRNA vaccines intervene directly in the patient's genetic material and therefore change the individual genetic material, which represents genetic manipulation ...”

The message goes on to claim that this “genetic manipulation” causes irreversible damage.

This means: “This vaccine is problematic in terms of health, morality and ethics, and also in terms of genetic damage which, unlike the damage caused by previous vaccinations, will be irreversible and irreparable.”

The message also claims Kennedy said “neither I nor any other therapist can help you because the damage caused by the vaccination is genetically irreversible”.

It’s been viewed more than 290,000 times since it was first published.

Two of the major vaccines against Covid-19 use messenger RNA, or mRNA. Did Kennedy say that these vaccines will cause irreversible and irreparable damage to people’s genetic material? And is that true? We checked. 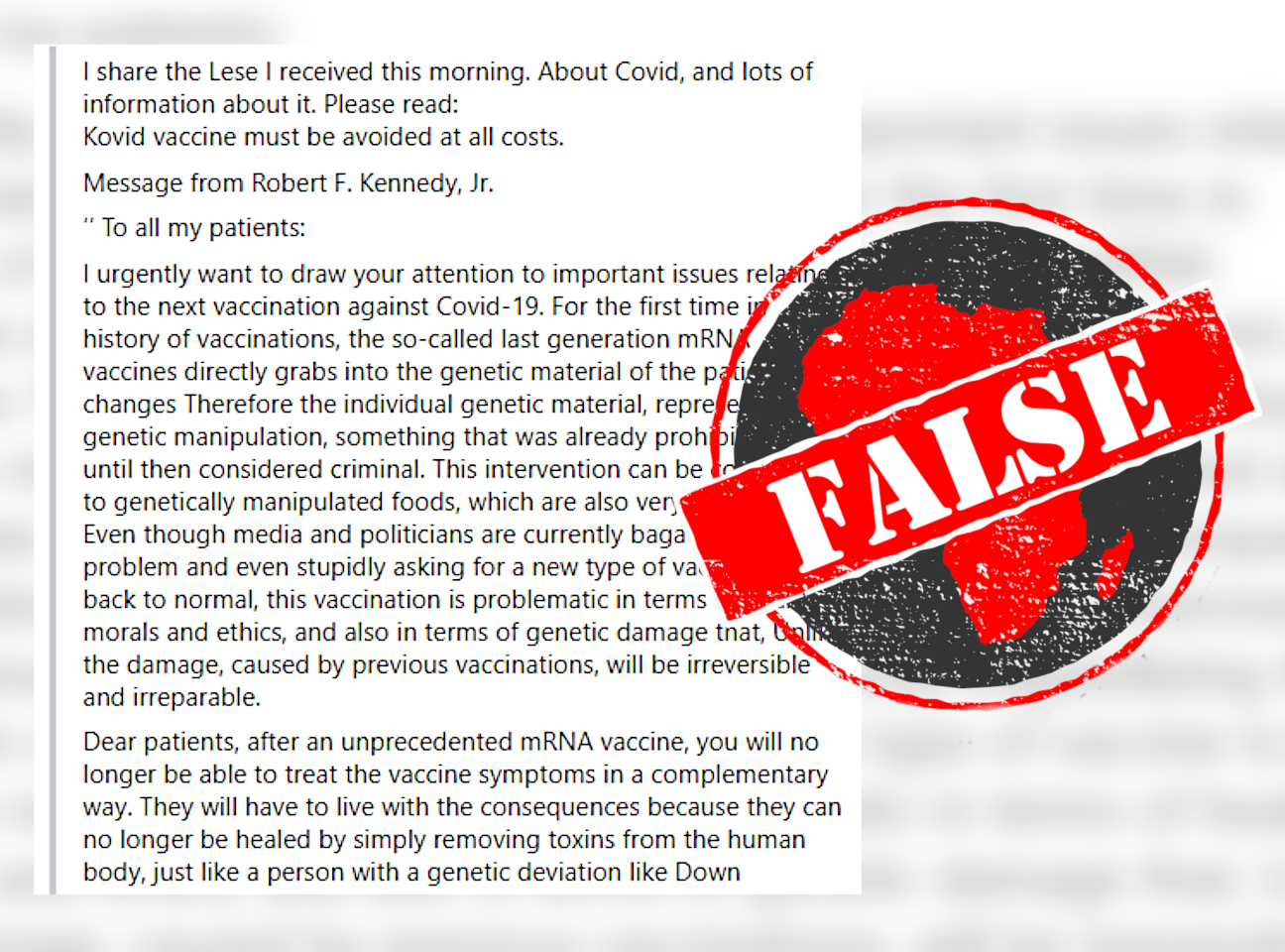 The first sign that the post may be dodgy is that it quotes Kennedy referring to himself – with phrases such as “to all my patients” and “neither I nor any other therapist” – as a health professional.

But he’s not. He’s a lawyer, environmental activist and radio talk show host who has become known for supporting the debunked claim that vaccines cause autism.

Kennedy has spread vaccine misinformation on his Facebook page. He has been publicly criticised by his own family, including his niece Dr Kerry Kennedy Meltzer –  a medical doctor – for his views on both measles and Covid-19 vaccines.

But we could find no evidence that Kennedy said the words attributed to him in the Facebook post.

In fact, he gave US fact-checking site Snopes a “statement officially disavowing authorship”.

“I never made those underlying assertions [in the viral post] and I don’t believe them to be factually accurate,” he reportedly said. “The giveaway was me supposedly identifying myself as a physician. Many forums have reposted it and we have been playing whack-a-mole trying to get them to remove it. I am grateful for the chance to officially disavow it here.”

A vaccine stimulates the body’s immune system to produce antibodies against disease-causing germs such as viruses and bacteria.

Covid-19 mRNA vaccines are a new type of vaccine. Unlike many vaccines, which use weakened or inactivated germs, the mRNA vaccine gives a set of instructions to cells to make a piece of the “spike protein” on the surface of the virus that causes Covid-19. This set of instructions triggers an immune response, causing the body to create antibodies that fight the virus.

According to the medical experts at the Meedan Digital Health Lab, the vaccine cannot alter human genetic material even temporarily. “To alter the human DNA, one would need to introduce genetic material from another organism into the nucleus of the cells of the human body which contains their natural DNA,” they explain.

“The mRNA does not enter the nucleus: it remains in the cytoplasm of the cell where the spike protein is made.”

According to the experts, the mRNA is also relatively fragile and breaks down in the cell within 72 hours.

Robert F Kennedy did not say that the Covid-19 mRNA vaccine can permanently alter human genetic material, causing irreversible damage. And it’s not true. The mRNA cannot penetrate the nucleus of cells in the human body, making it unable to change the genetic material