The alert popped up in June 2019 on the Africa Check Whatsapp group set up to flag false and potentially harmful health information in Nigeria.

It was also shared on the Facebook pages DVBIOLOGYSCIENCE, Hallaur and The Star News.

The message reads: “Dr Abbas Hussain Kazmi of Sheikh Zaid Hospital stressed that if everyone who receives this newsletter can forward ten copies to others, surely at least one life will be saved back... Hot coconut water can save you a lifetime... Hot coconut water ~ only kills cancer cells...

“Cut 2 to 3 thin coconut flakes in a cup, add hot water, it will become ‘alkaline water’, drink every day, it is good for anyone. Hot Coconut water releases an anti-cancer substance, which is the latest advance in the effective treatment of cancer in the medical field.”

It also claims that “hot coconut juice has an effect on cysts and tumours. Proven to remedy all types of cancer.” 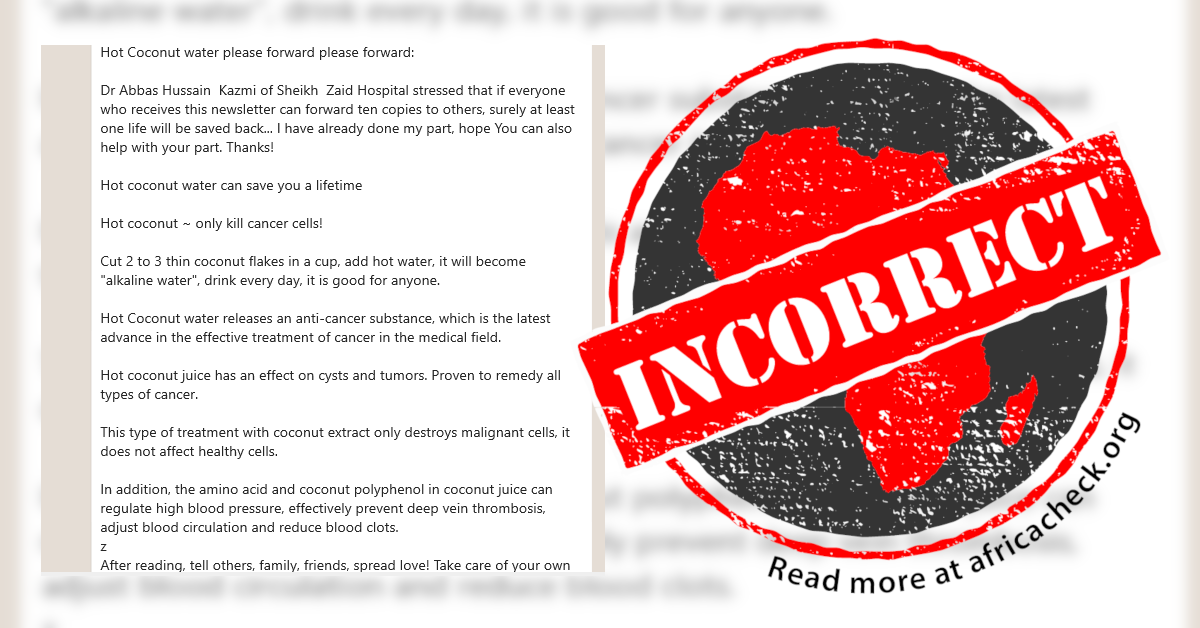 This isn’t the first time this message has made the rounds. Africa Check debunked a similar claim on Facebook in April 2019, rating it false.

Some studies, such as one of a small number of breast cancer patients in Kelantan, Malaysia, found that virgin coconut oil could reduce the side effects of chemotherapy. And lauric acid, a component of coconut oil, has been found to inhibit the growth of colon cancer cells.

Dr Atara Ntekim, an oncologist, said coconut was being investigated as one of many substances offering a potential cancer cure.

“Scientists are working hard to find a lasting cure for cancer,” he told Africa Check. “The search includes the use of new molecules and screening of naturally occurring items such as animal and plant products to test their effects on cancer cells. Coconut oil is one of the items that is being investigated.”

Ntekim is a faculty member in the department of radiation oncology at the University College Hospital Ibadan.

“Presently, only a few laboratory reports using cancer cells that are grown in the lab (cell lines) have been reported to be affected by coconut oil. This will still need more research to be able to translate it to humans. Before it can be applied to humans it has to be investigated that using it for treatment will not have additional serious side effects.”

Coconut oil is about 90% saturated fat, much more than butter. Eating too much saturated fat raises “bad” cholesterol levels, increasing the risk of heart disease.

“Until these are resolved, at present, there is no role for the use of coconut oil in cancer treatment in humans,” Ntekim said. – Motunrayo Joel