No, ruling party campaign spokesperson did not give Nigerians the middle finger on national TV

IN SHORT: A screenshot shared on social media in Nigeria appears to show a prominent politician giving Nigerians “the finger”. But Festus Keyamo wasn’t deliberately being rude in the televised interview. The APC spokesperson was listing items on the fingers of his hand and the screenshot caught him at the moment he extended his middle finger.

A screenshot showing the presidential campaign spokesperson for Nigeria’s ruling party, the All Progressives Congress (APC), was posted on Facebook and Twitter, with a caption that claims he was “giving Nigerians the middle finger on national TV”,

Festus Keyamo was appearing on popular Nigerian TV channel, Channels TV. He is Nigeria’s junior minister for labour and employment, as well as the APC campaign spokesperson.

Tinubu spoke at the inauguration of the women’s arm of the APC campaign team in the Nigerian capital Abuja on 10 October.

At one point in his speech, he told the women delegates that if people said they wanted a change of government – away from the ruling APC – then the women should tell the naysayers “shut up your mouth”.

This appears to be the incident referenced in the claim as “shurrup”.

But did the APC campaign spokesperson rudely give Nigerians the middle finger? We checked. 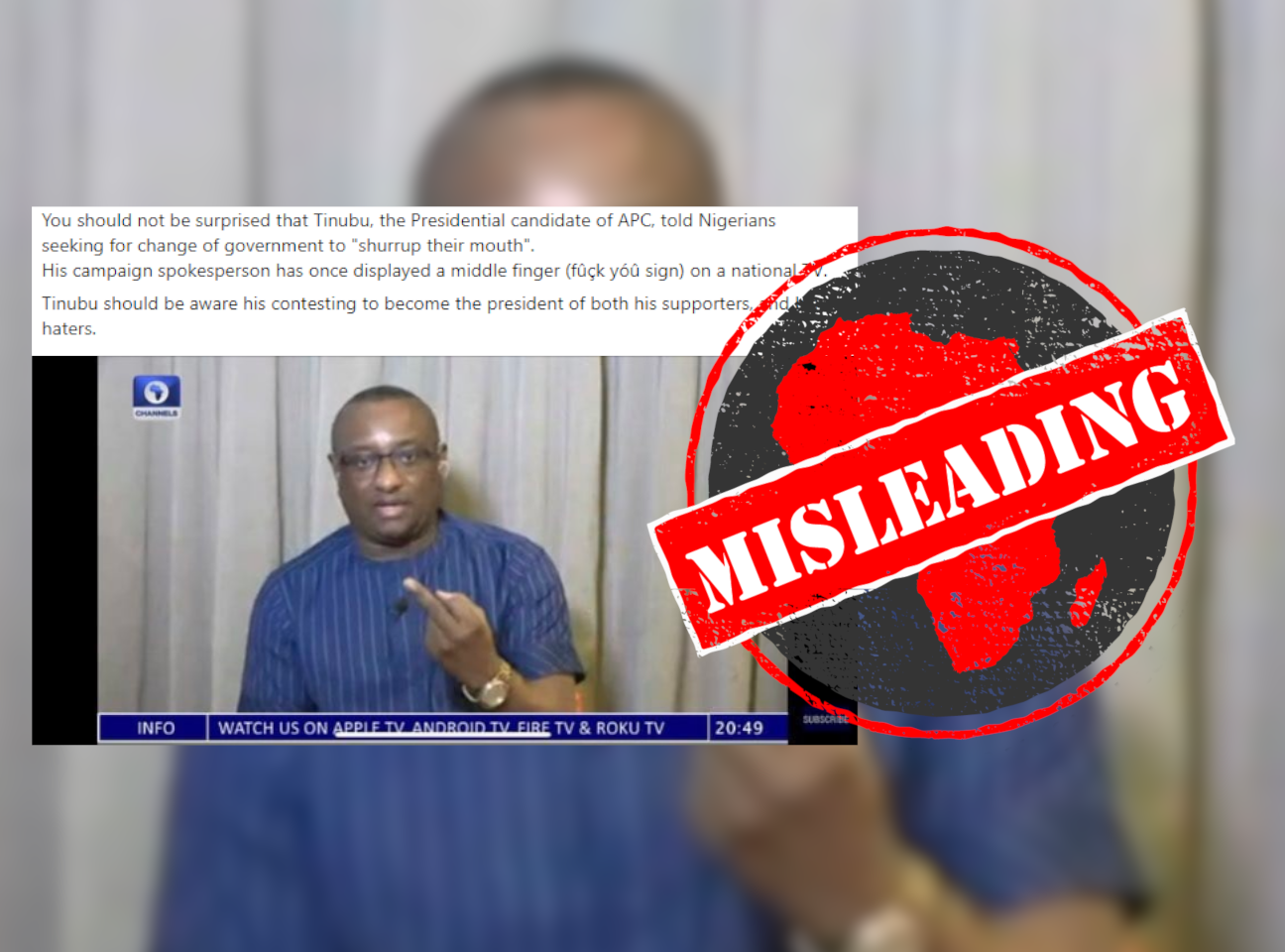 Keyamo was only listing items on his hand

We traced the screenshot’s origin to a YouTube video posted by Channels TV, where Keyamo was answering questions about Tinubu’s campaign.

The video was posted on 26 September 2022, two days before election campaigning officially kicked off in Nigeria.

The screenshot was taken 13 minutes and 52 seconds into the video, where Keyamo was listing what he claimed Tinubu and the APC wanted Nigerians to know. He started counting on his middle finger. He was not insulting Nigerians by giving them the middle finger, at least not deliberately, as claimed in the social media post.

Since election campaigning began in Nigeria, supporters have taken to social media to show their support for certain candidates and to discredit their opponents. This is an example of a misleading or out-of-context post.

To avoid falling for misleading posts online, read our guide on how to tell if a news article is reliable.