President Paul Kagame has expelled 18 Chinese nationals from Rwanda for overworking locals, claims a message posted on Facebook on 1 April 2021.

It reads: “‘You can't eat from Africa and you disrespect us’. He was quoted as he ordered the immediate deportation of 18 Chinese Nationals who overworked Rwandese. ‘Africa is a people Continent that allows everybody to stay peacefully but won't accept any form of slavery again’. President Paul Kagame.”

The post includes a photo of Kagame. It has been shared on several Facebook pages – here and here – including one with more than 947,000 followers.

Did Kagame order the deportation of 18 Chinese nationals for mistreating workers in Rwanda? 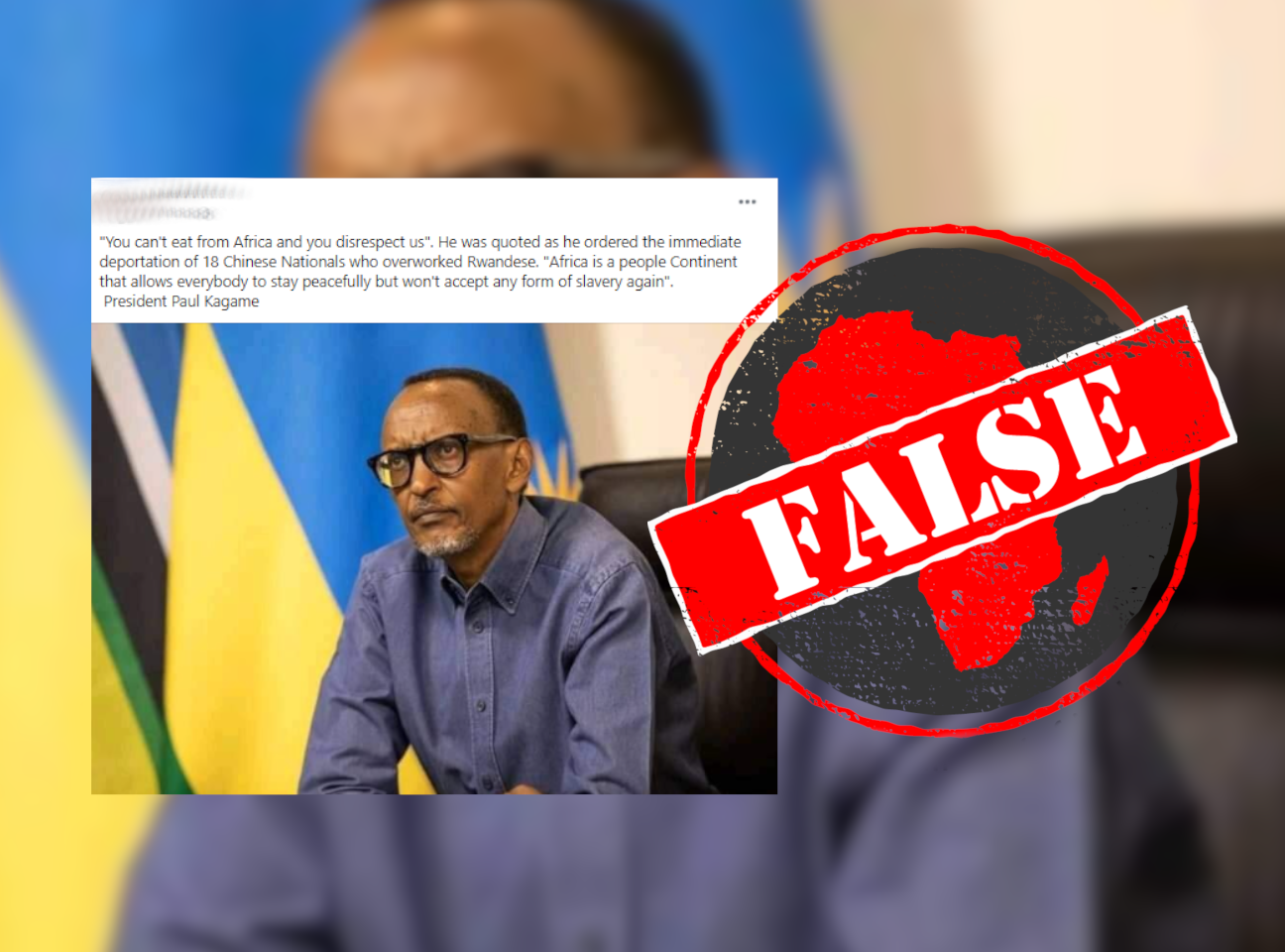 ‘No such thing happened’

Initial research on the claim led to a similar statement that started circulating online on 31 May 2020.

In response to a tweet that shared the claim in 2020, Kagame's media adviser, Yolande Makolo, warned that the reports were false.

On 2 June 2020, the foreign affairs ministry tweeted a statement asking the public to ignore the claims.

It reads: “The Ministry of Foreign Affairs and International Cooperation would like to inform the public that there has been fake news circulating on various social media platforms stating that 18 Chinese citizens were expelled from Rwanda; no such thing happened. Please ignore.”

The Ministry of Foreign Affairs & International Cooperation would like to inform the public that there has been fake news circulating on various social media platforms stating that 18 Chinese citizens were expelled from Rwanda; no such thing happened. Please ignore.

There are no recent news reports that Chinese nationals have been deported from Rwanda on Kagame’s orders.

‘Fabricated and full of misinformation’

On 13 April 2021, Makolo told Africa Check that “no such thing happened” and the claim was “fake news”.  She said people should ignore it.

Responding to an email from Africa Check, China’s embassy in Rwanda said it was not aware of any deportation.

“The Chinese embassy in Rwanda hasn’t heard about any of the deportation regarding the claim,” the embassy told us.

“This piece of news is again fabricated, and full of misinformation. China and Rwanda are committed to deepen our bilateral cooperation, and bring more benefits to the Chinese and Rwandan people."