“We all know Shona Fergusons death is vaccination related,” reads a message posted on Facebook on 20 August 2021. “The blood clot is an indication of this.”

Actor and producer Shona Ferguson died in Johannesburg on 30 July.

The message continues: “But no one is saying a word...the mere fact that its not even questioned as a possible cause is proof that it is...and if he did recieve vaccination before his death I am dissapointed by the family who dont speak to this fact to save other people who are unaware of these side effects.”

It includes a screenshot of a SABC News TV clip showing a woman in a face mask. At the bottom of the screen, banner text reads: “Investigations into 29 deaths conclude that none were caused by Covid-19 jabs.”

Ferguson was born in Botswana in 1974, and moved to South Africa in 2001. He co-owned the South African TV and film production company Ferguson Films with his wife, fellow actor Connie Ferguson.

Did Ferguson die of blood clots caused by a Covid-19 vaccine? 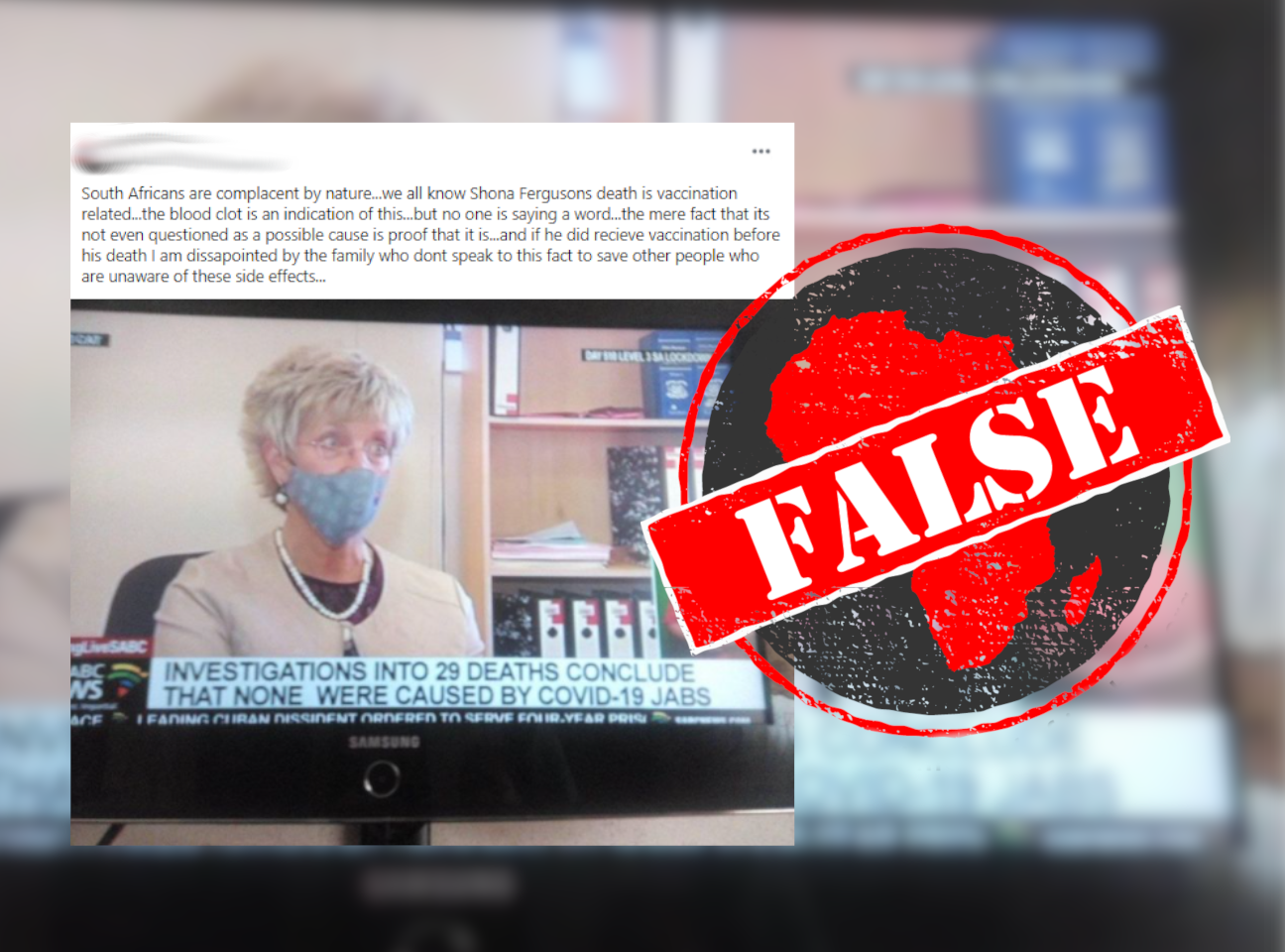 “Mr Ferguson’s untimely passing was due to Covid-19 related complications, and not a heart attack as reported by media,” the statement says.

At his funeral on 4 August, his sister-in-law Atosie Pilane said that Ferguson had been diagnosed with Covid-19 on 26 June. He was admitted to hospital with low oxygen levels on 3 July and died four weeks later.

We could find no evidence that Ferguson’s death was caused by a blood clot.

On 13 April the US Food and Drug Administration (FDA) published a statement recommending the Johnson & Johnson rollout be paused. This was after six women developed thrombosis, a rare and severe type of blood clotting, after getting the vaccine.

On 23 April the FDA lifted the pause after a thorough safety review, concluding that the vaccine was safe and effective in preventing Covid-19.

The Sisonke Study, which administered the Johnson & Johnson vaccine to healthcare workers in South Africa, published its early results on 6 August. Out of 477,234 healthcare workers who received the vaccine, only two cases of thrombosis were reported and both patients made a full recovery.

South African actor Shona Ferguson did not die of blood clotting caused by a Covid-19 vaccine. While cases of blood clotting have been reported following administration of the Johnson & Johnson vaccine, these cases are extremely rare.