In the wake of this, several South African social media users have shared the claim that Leon’s father, the late judge Ramon Leon, sentenced anti-apartheid activist Solomon Mahlangu to death in 1979.

Leon was a supreme court judge in what was then Natal province, now KwaZulu-Natal.

This claim has circulated for several years, as has a variation which claims the older Leon turned down Mahlangu’s attempts to appeal his sentence. All are false. 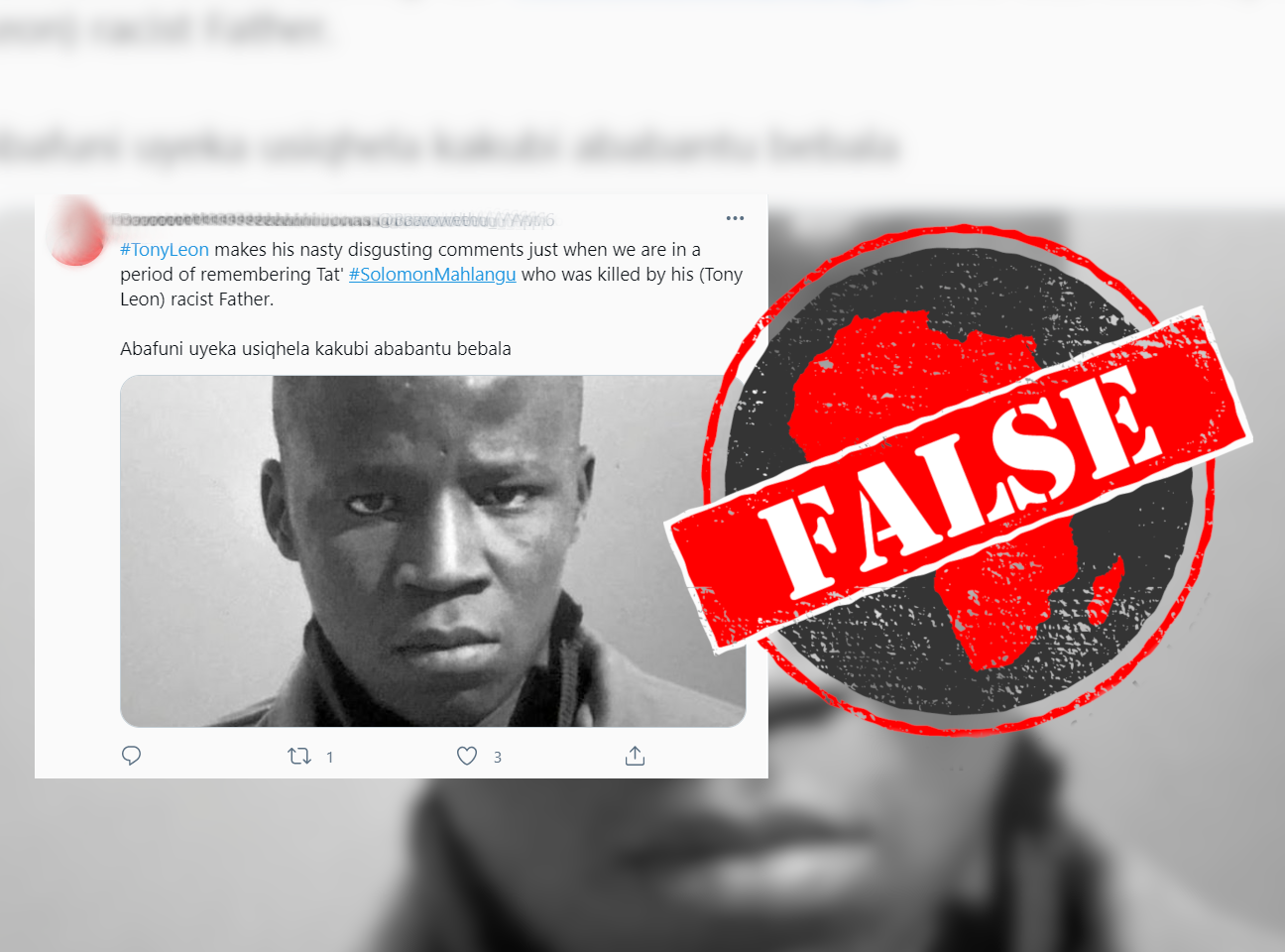 Leon neither sentenced Mahlangu, nor denied his appeal

Mahlangu was executed at the age of 22, for his involvement in an exchange of fire with police in which he never fired a shot.

He was charged with murder on the grounds of “common purpose”. This meant that any members of a group with a common goal could be found guilty of crimes committed in pursuit of that goal.

The verdict was controversial, sparking international protests and attempts by groups, including the United Nations, to prevent Mahlangu’s execution.

Mahlangu’s sentence was appealed twice, but it was turned down first by the Rand supreme court and then the Bloemfontein appeal court.

Ramon Leon served on the Natal bench of the supreme court and would not have been involved in Mahlangu’s trial.

(Note: The South African legal system was restructured in the 1990s and the new constitution adopted in 1997.)

This false claim was published in the South African newspaper the Mail & Guardian after Leon’s death in April 2018, along with the claim that Leon had been known as a “hanging judge”.

As Politics Web reported at the time, the Mail & Guardian retracted the claim, initially replacing it with the “correction” that Leon had denied Mahlangu’s appeal.

This was also retracted, along with the rest of the article. In a follow-up article, the Mail & Guardian noted that it was “Judge CDJ Theron” who sentenced Mahlangu. The newspaper also quoted two senior judges who said that Leon “never sat, even as an acting judge, on the appellate division”, and therefore wouldn’t have been involved in Mahlangu’s appeal.

Despite the newspaper retracting these falsehoods, they still spread on social media in South Africa, without correction.

Leon opposed death sentence, but did pass it down

Politics Web traced the misinformation to political party Black Land First (BLF), who claimed on their website in late 2017 that Leon had sentenced Mahlangu to death.

The post was removed from the BLF website some time after November 2020, but the false claim that Leon denied Mahlangu’s appeal was still live on the website at time of writing.

The editor of Politics Web contacted Africa Check to tell us that they had traced the claim to as far back as 2013, when tweets suggest it was promoted by groups including the youth league of the African National Congress, the country’s ruling political party.

Leon did hand down the death sentence in his time as a judge, most famously in 1986 to 19-year-old Andrew Zondo, who detonated a bomb which killed five people and injured 48 others.

Leon said in 1987 that he was opposed to the death penalty: “I don’t like capital punishment. I have had to impose the death sentence on a fair number of occasions. It always causes me acute distress.”

He added: “When one takes an oath of office one tries to be true to one’s oath and if one is unable to find extenuating circumstances then one is obliged to pass the death sentence.”

The death penalty was abolished in South Africa in 1995 by the constitutional court. It was the court’s first hearing. Tony Leon’s father, Ramon Leon, did sentence people to death in his time as a judge. But he had nothing to do with Solomon Mahlangu’s conviction.

Editor's Note (21/04/2021): This report has been corrected to reflect that Mahlangu was charged with murder on the grounds of “common purpose" and not as an accessory to murder as we had earlier stated, and that he was executed at age 22 and not 23. We have also added new information from Politics Web that the claim may have been circulating as far back as 2013.

Do 50 people die every hour from diseases related to poor hygiene, as Nigeria television ad claims? It’s more than that!