No! Typhoid is life-threatening, and can’t be cured with coconut fibre infusion

“AN ULTIMATE SOLUTION TO TYPHOID AND A BLOOD BOOSTER,” begins a message posted on Facebook.

It’s by “The Professor”, a Nigeria-based page that posts false and sometimes harmful home remedies. Africa Check has debunked many of them.

“This is Coconut peel, for typhoid or to boost your blood,” the message continues. “[D]ry it very well with sun and cook it with a pinch of potash,drink a cup morning and night.

“Check yourself withing two weeks and see how typhoid will fly away.” The post concedes the advice is not from a doctor.

Coconut is an edible fruit in the Arecaceae palm family. But will drinking an infusion of the dried fibre that surrounds the fruit really cure typhoid? 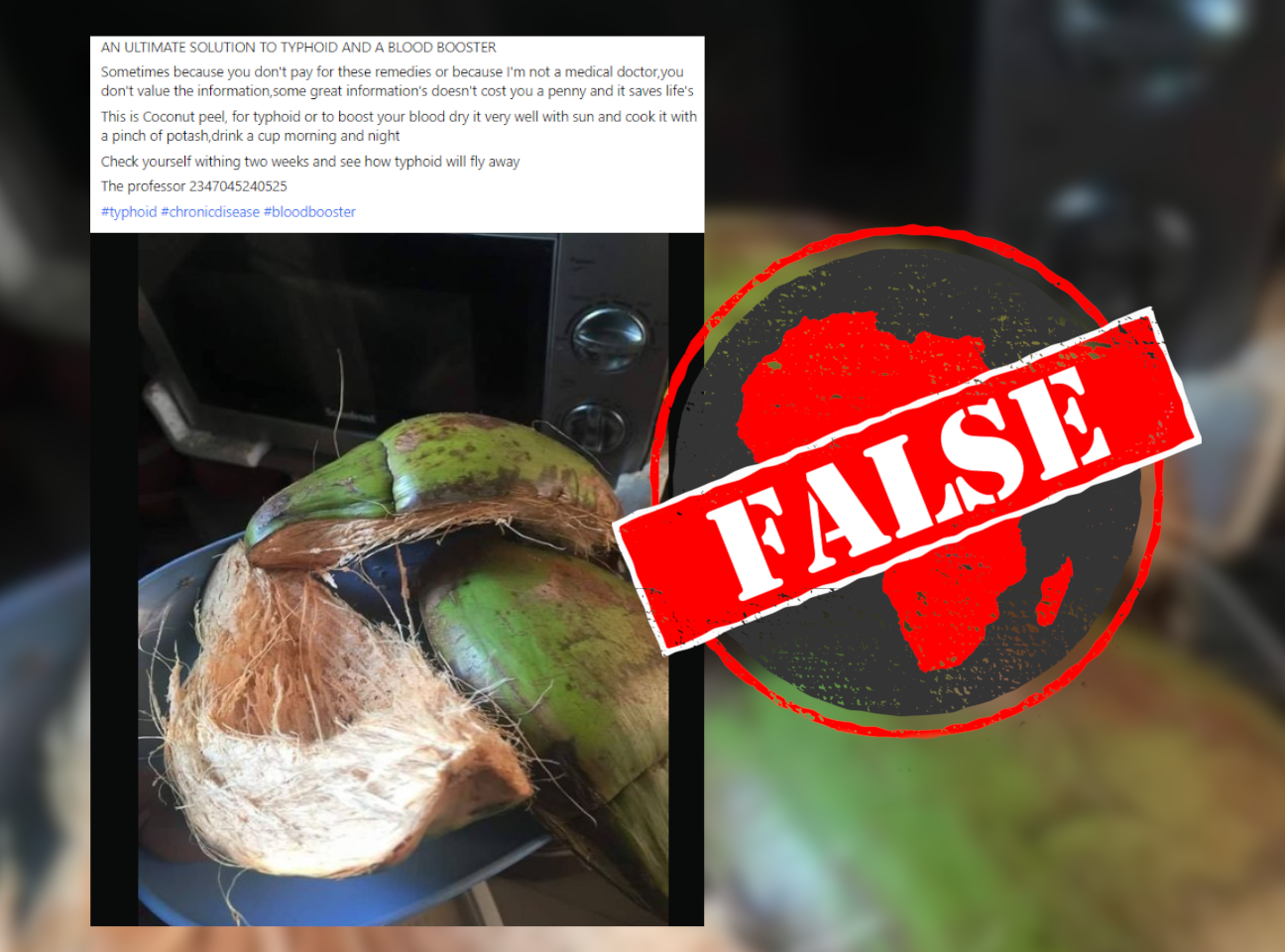 Typhoid fever is a life-threatening infection caused by the bacteria Salmonella typhi. It spreads through contaminated food or water.

The symptoms of typhoid include prolonged fever, fatigue, headache, nausea, abdominal pain, and constipation or diarrhoea. Severe or untreated cases of typhoid may lead to serious complications or death.

“Typhoid fever is most common in parts of the world that have poor sanitation and limited access to clean water,” the UK’s National Health Service (NHS) says. Children are most at risk, because their immune systems are still developing.

Africa Check asked Dr Rotimi Adesanya, a family physician, if the remedy would be effective.

“This is not a medical treatment nor does it have a scientific basis,” he told us. “Even if coconut fibre was found to have medicinal value, it can’t be taken in the raw state. It would have to be subjected to analysis.”

“I’m not aware it’s used for typhoid treatment. Such a claim should be ignored,” Akande said.

Both doctors advised people with symptoms of typhoid to see a qualified healthcare professional as soon as possible.

Antibiotics the only cure

The NHS says one in five people with untreated typhoid could die, but the infection is easily cured with antibiotics.

“If typhoid fever is diagnosed early, the infection is likely to be mild and can usually be treated at home with a seven- to 14-day course of antibiotic tablets,” the service says.

“More severe typhoid fever usually requires admission to hospital so antibiotic injections can be given.”

According to the World Health Organization, people with typhoid need to maintain proper hygiene to lower the chances of passing the infection on to someone else.