A message posted on Facebook in early May 2022 claims that the United Kingdom has declared the separatists of Nigeria’s Indigenous People of Biafra (Ipob) to be terrorists.

The message, based on media reports, claims the UK government “has finally accepted Nigeria’s classification of the Indigenous People of Biafra, IPOB, as a terrorist organisation”.

Ipob seeks to restore the Republic of Biafra, established with the secession of Nigeria’s eastern region in 1967. After a brutal 30-month civil war that ended in January 1970, the region was reabsorbed into Nigeria.

In September 2017, the Nigerian government banned Ipob and labelled it a terrorist organisation.

But has the UK now done the same? 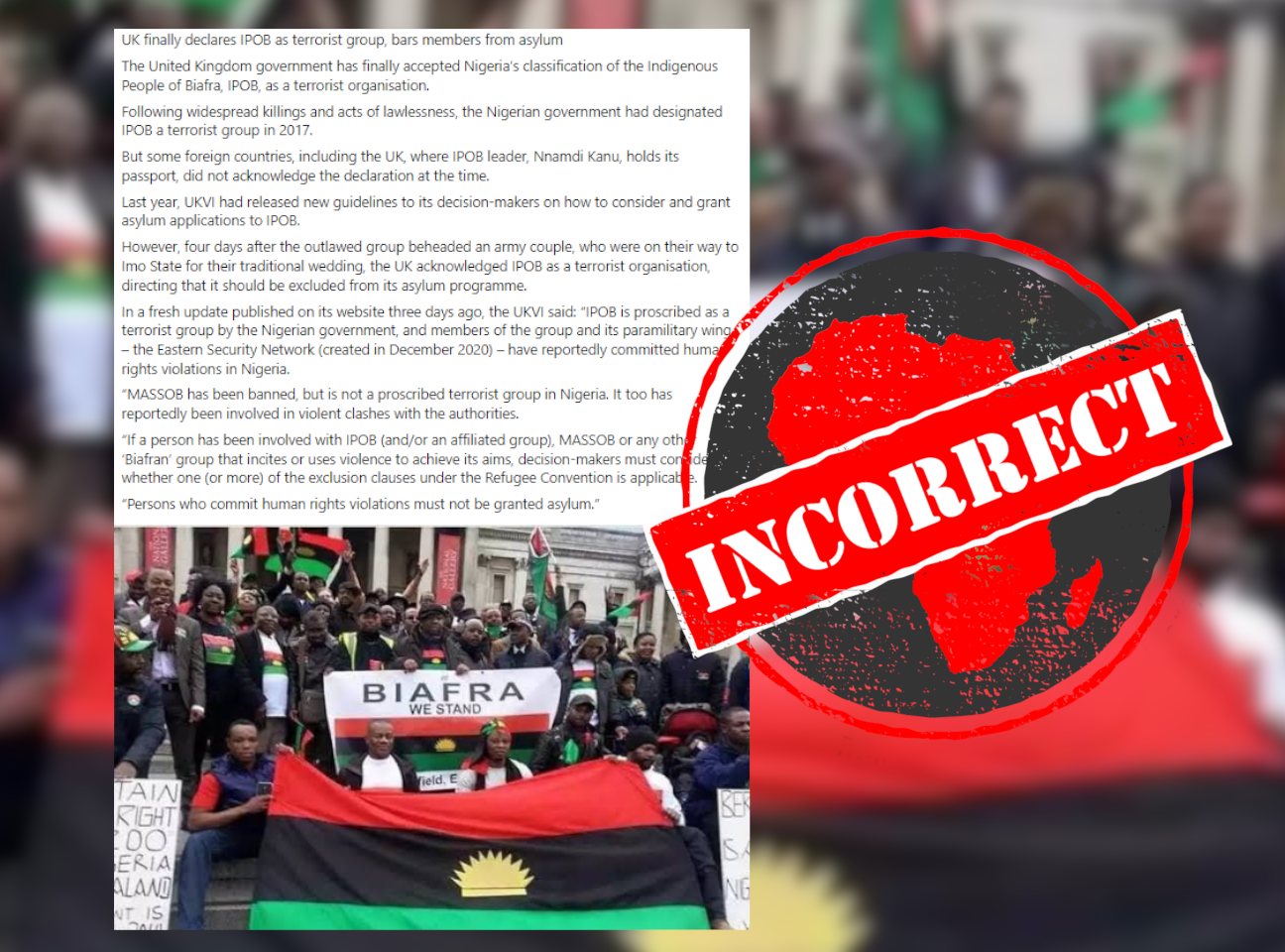 On 6 May the British High Commission in Nigeria posted a statement on Twitter dismissing the reports as untrue.

Please see our statement, which clarifies the UK Government's position in response to some inaccurate reporting in circulation today. pic.twitter.com/pPou7SxQ9S

“We are aware of inaccurate reporting circulating in the media and online that the UK Government has added the Indigenous People of Biafra (IPOB) to the UK’s list of terrorist groups or organisations banned under UK law,” the statement reads.

“These reports are untrue. The Indigenous People of Biafra (IPOB) is not a proscribed organisation in the UK."

It adds: “The inaccurate reporting relates to the 13 April 2022 publication by the UK Government of a revised Country Policy and Information Note (CPIN) on separatist groups in SE Nigeria, including the Indigenous People of Biafra (IPOB).

“CPINs provide country of origin information (COI) and analysis of COI for use by UK Government decision-makers handling particular types of protection and human rights claims.”

The statement says asylum and human rights claims made in the UK are considered on their facts, with relevant background country information and case law taken into account.

It also says the CPIN acknowledges that “the Nigerian government has proscribed IPOB as a terrorist organisation, some members of IPOB have reportedly used violence against the state and members of the public, and advises that persons who have committed human rights abuses must not be granted protection”.