No, the UN is not planning to become a world religion, replacing the Christian church

“The UN says that the Christian Church is the enemy of human rights,” begins a message widely copied and shared on Facebook. The UN, the United Nations, is an international organisation with 193 member states.

The message goes on to claim that the UN “says that it will become a world religion to impose humanitarian laws […] so that the world is not subject to Christian doctrine”. It implies that the UN is using anti-discrimination policies to target the Christian religion.

It says that the “new Onuist religion declares” that “Christians are an obstacle and an opposition to the excellent work of the UN for Gender Ideology” and “it is time to take away their rights, to form a religion with humanistic, constitutional and moral rights, not spiritual”.

These claims also appear on the Defender Newspaper website.

Is there any truth to them? No. 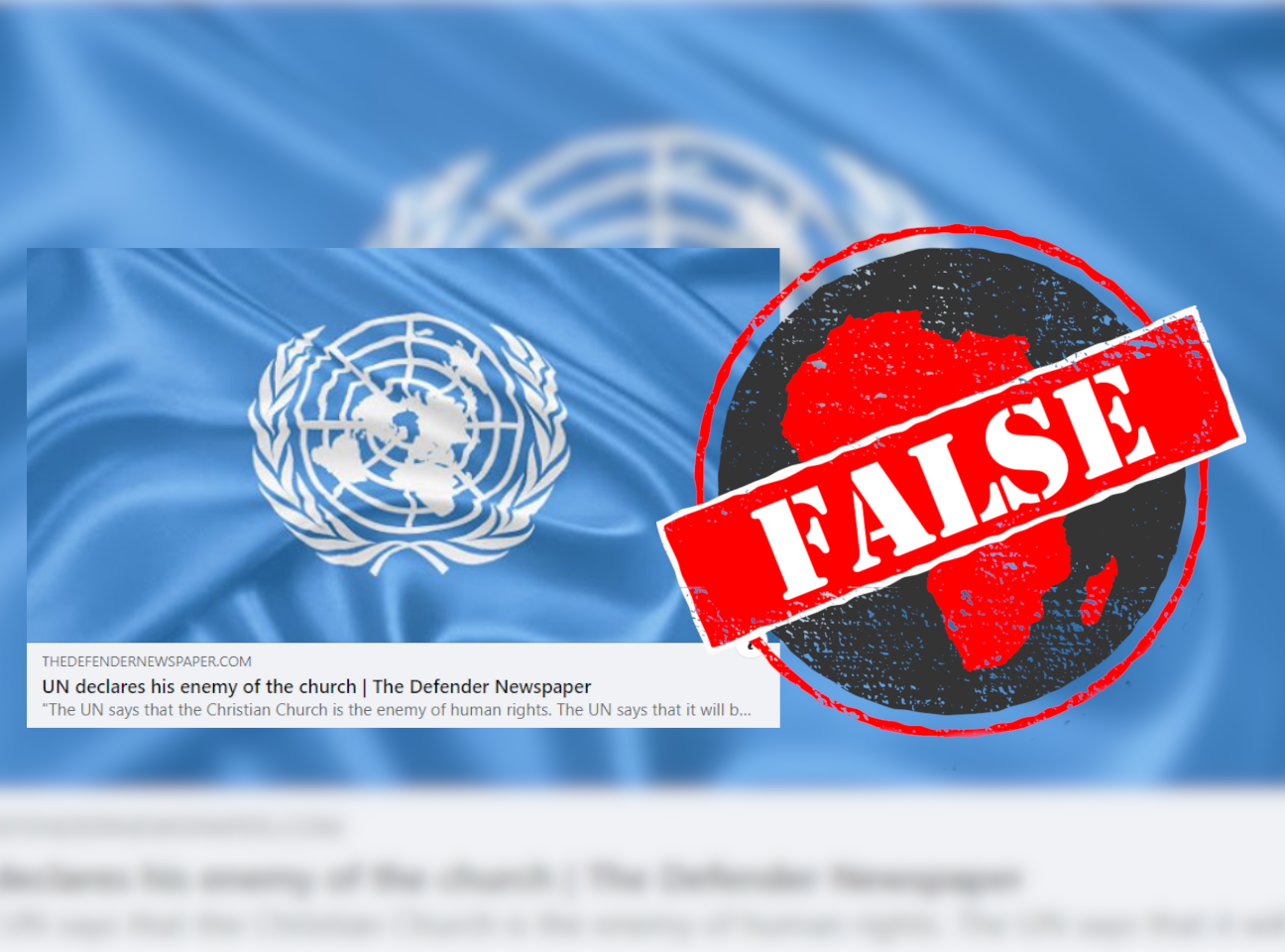 UN has not declared itself a religion

The UN does not describe itself as a religion on its website, and it has not declared itself a religion in any official publication.

The “new Onuist religion” is not mentioned in any UN publications. Onuist is one name used for a king of the Picts, who lived from 732 to 761 CE. He is also called Oegus. The word appears to have no other usage, and there is no “Onuist religion”.

The Facebook message does not give sources for any of its claims, which do not appear to match anything published by the UN.

The post references the “ID 2020 project”. This is in fact the organisation ID2020, which works in an alliance with other organisations to promote “ethical, privacy-protecting approaches to digital ID”. It has received support from the UN, but the UN is not one of its allied organisations, nor was it founded or managed by the UN.

ID2020 has been the subject of thoroughly disproven conspiracy theories related to the Covid-19 pandemic.

The Facebook post also references other disproven conspiracy theories that claim vaccines cause infertility, and suggests that the UN intends to “neutralize the global growth of humanity through HOMOSEXUALISM AND LESBIANISM”.

According to the message, the UN intends to “neutralize religious groups” and “take away their religious rights”. Supposedly this is because Christians “do not accept the same-sex marriage union” as well as other “evils” such as abortion and divorce.

But this is incorrect, and does not reflect the aims of the UN.

The UN was founded in 1945, largely in response to the second world war, with several aims such as maintaining “international peace and security,” promoting international cooperation and “friendly relations among nations”, and upholding an agreed-upon universal declaration of human rights.

The rights in the declaration are entitled to anyone regardless of “race, colour, sex, language, religion, political or other opinion, national or social origin, property, birth or other status”. They also explicitly include “the right to freedom of thought, conscience and religion”.

And while the UN has suggested that states provide access to safe and legal abortion services in order to prevent deaths, it has not said that any religious group should be stripped of its rights because of this.

Muslims made into corned beef? No, photo of 2010 Tibetan earthquake victims

DA has ‘no intention’ to shut down Muir Street mosque in Cape Town, South Africa