IN SHORT: A message going viral in November 2022 claims that high numbers of typhoid fever cases have been reported in eight of South Africa’s nine provinces. But the message is an exact copy of another posted in February. And the original message was based on a misleading newspaper report on a two-year study.

That’s the breathless beginning of a message that’s gone viral on Facebook and WhatsApp in South Africa since 2 November 2022.

It’s Afrikaans for: “Please boil your water – all water!!!”

The message claims that cases of “tifus” – in this case, typhoid fever – have been reported in eight of South Africa’s nine provinces.

It says the National Institute of Communicable Diseases, or NICD, announced the typhoid fever outbreak “on Wednesday”.

The message then lists the cases in each province: 64 in the Western Cape, seven in the Eastern Cape, 18 in North West, four in the Free State, 45 in Gauteng, four in Limpopo, 12 in Mpumalanga and nine in KwaZulu-Natal.

It claims the outbreak was reported by a newspaper and radio station.

It ends with: “Lyk my daar's nie einde aan die peste en plae nie.” Translation: “Looks like there’s no end to the plagues and problems.”

But the message is incorrect. It’s a word-for-word copy of a message that first appeared on Facebook nine months ago.

And that message was based on a newspaper report that seemed alarming, but was just misleading. 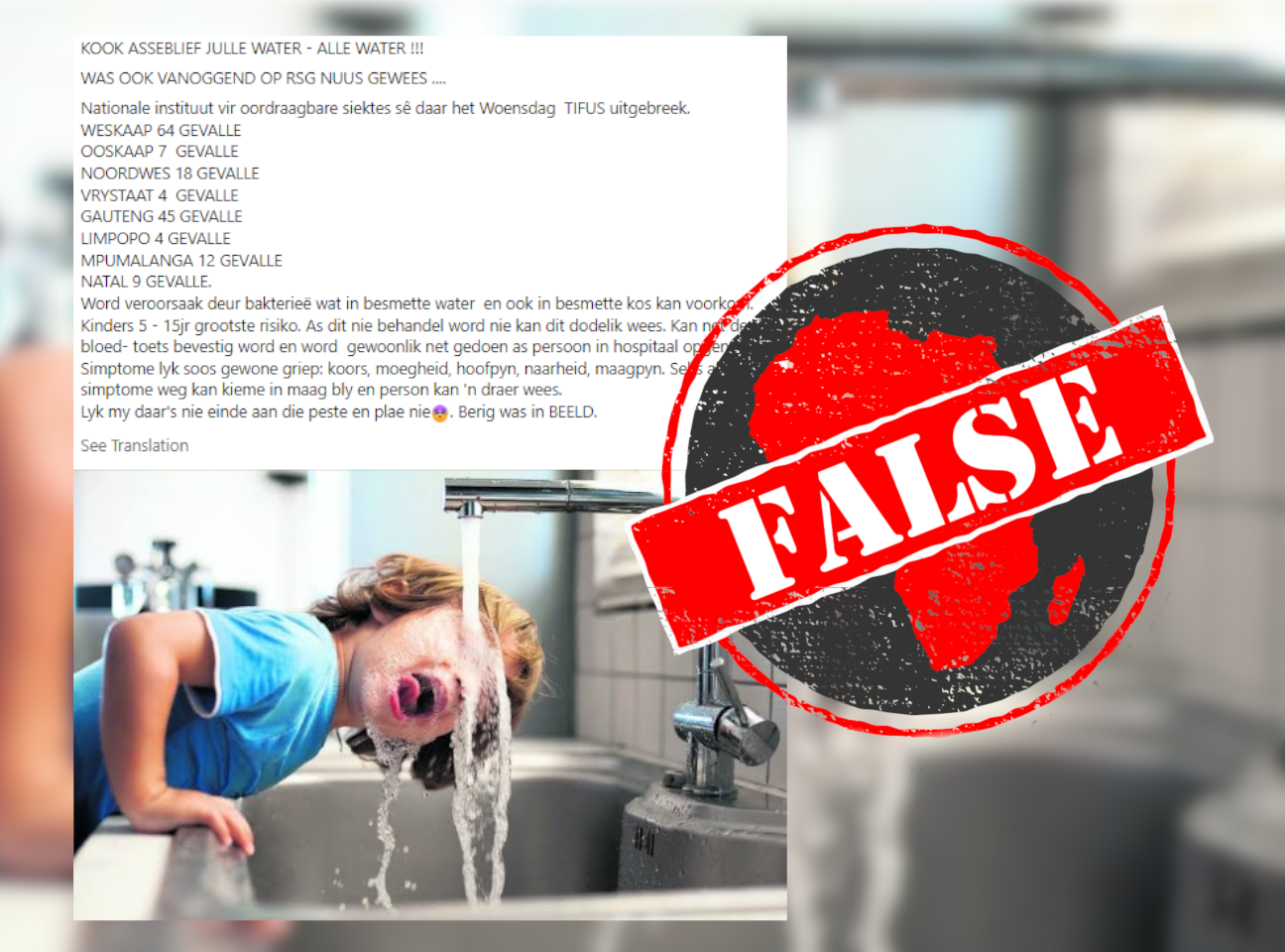 What is typhoid fever?

The disease is very contagious. It spreads quickly in places where people live in poverty – most often places with dirty water that don’t have proper toilets or sewage systems that work properly.

The symptoms of typhoid fever may include a high temperature, body pains such as headache and stomachache, tiredness, coughing, not wanting to eat, wanting to throw up, constipation and diarrhoea. Some people get a rash. If left untreated, the disease can lead to death.

(It’s worth mentioning that typhoid fever is different from typhus. Typhus is caused by different bacteria and is spread through the bites of infected fleas, mites and lice.)

As several Facebook users point out, the viral November message is an exact copy of a Facebook message that first appeared in February. That means it’s nine months old. So the “tifus” outbreak it describes couldn’t be happening in November. 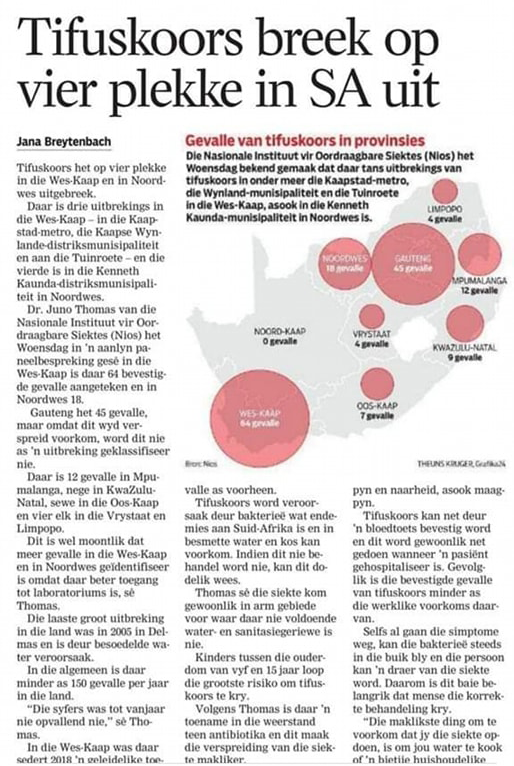 The article’s opening paragraphs say three of the outbreaks are in the Western Cape, and the fourth in North West.

It then gives the same typhoid fever cases as the message: 64 in the Western Cape, seven in the Eastern Cape and so on. It includes a map of the cases across South Africa. But it doesn’t say when the cases were reported.

The article reports on an online panel discussion with Dr Juno Thomas of the NCID, presented on Wednesday 16 February. Thomas heads the organisation’s Centre for Enteric Diseases.

We found the panel discussion on YouTube. In her presentation, Thomas discusses a study that used genetic analysis to investigate how cases of typhoid fever across South Africa were related to each other. This identified different strains of Salmonella typhi bacteria, and traced how the infection had spread.

The study looked at the total number of cases in the country in 2020 and 2021. This is where the numbers given in the Facebook message and newspaper article come from.

There were 64 cases in the Western Cape, seven in the Eastern Cape and so on, but over two years – not in February 2022.

And the four “outbreaks” the newspaper article reports were in fact what Thomas calls “clusters of cases – cases that are due to the same genetic strain” of the typhoid bacterium. “That means they are very likely a common source of infection.”

An update on enteric fever, published on the NCID website on 18 February, describes these four clusters as “small localised outbreaks” that were “responsible for the increased case numbers” in the Western Cape and North West.

The newspaper article is misleading.

“The number of reported enteric fever cases in South Africa has declined over the last few decades, and larger outbreaks have become less common,” the NCID says.

“After the Delmas outbreak in 2005, the number of enteric fever cases in South Africa has remained stable with less than 150 cases per year (an average of 97 cases per year)."