IN SHORT: We’ve seen plenty of outlandish claims about the war between Russia and Ukraine on social media. But one claiming actor Sean Penn was involved in faking the entire conflict may take the cake – and is certainly also false.

In February 2022, Russia invaded its neighbour Ukraine, beginning a war which at time of writing is still ongoing.

Misinformation about the war has been rife, and Africa Check has even debunked false claims that the conflict has been entirely fabricated.

A video has since been shared on Facebook, Twitter, and TikTok, including in South Africa, with new claims that footage of the war in Ukraine is staged. Some users either suggest or claim outright that this has been done in part by US actor and filmmaker Sean Penn.

The video shows a director shouting “Action!” before a crowd of shouting runs towards the camera.

But was this film crew really filming staged footage of the war in Ukraine? 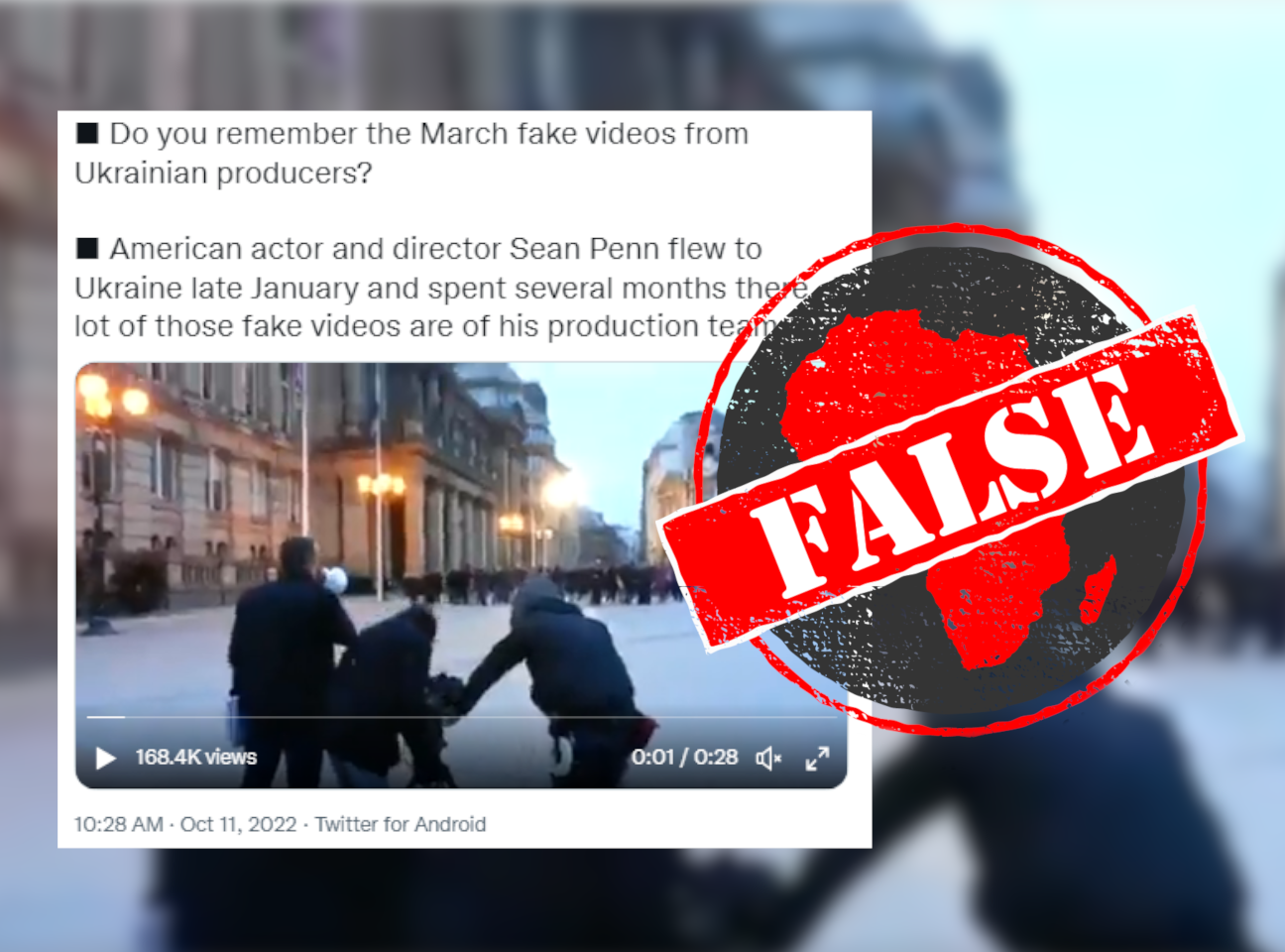 Behind the scenes footage almost a decade old, and filmed in Belfast

As some social media users have pointed out, this video was filmed in the city of Birmingham in the United Kingdom, and shared online nearly a decade before the invasion of Ukraine.

The video was originally uploaded to YouTube in 2013, with the title Invasion Planet Earth BTS run for your life Birmingham. It claims to show behind-the-scenes footage of the filming of the 2019 science fiction film Invasion Planet Earth, directed by British filmmaker Simon Cox.

And yes, a panicked crowd can be seen running away from computer-generated alien spaceships in trailers for the film.

Google Street View images confirm that the footage was filmed in Birmingham’s Victoria Square. Details like the distinctive Birmingham City Council building, and the UK flag outside it, are clearly visible in the video.

The area is also seen in one of the video diaries shared by Cox at a point in the filming when the working title for Invasion Planet Earth was still using Kaleidoscope Man.

The footage is clearly much older than the Russian invasion of Ukraine, and was shot for a science fiction film, not as part of a disinformation campaign.

As fact-checking organisation PolitiFact detailed in March 2022, a bizarre conspiracy theory has sprung up because Sean Penn visited Ukraine to film a documentary about the Russian invasion.

PolitiFact explains that the conspiracy takes advantage of a slightly misleading fact. A 24 February Facebook post by the office of the Ukrainian president made reference to Penn visiting Ukraine in November 2021, months before the February 2022 invasion.

However, this isn’t evidence Penn was preparing for a choreographed invasion. News reports written at the time of Penn’s November 2021 visit make it clear that the documentary was meant to be about what was then only a “proxy war” between the two countries.

The Invasion Planet Earth footage was obviously not filmed by Penn, and there is no evidence to suggest that he has filmed staged footage of the Russian invasion of Ukraine.