“CDC confesses: Vaccines are failing, and the vaxxed can be super-spreaders,” reads the headline on a screenshot of an article circulating on Facebook in South Africa since August 2021.

The CDC is the Centers for Disease Control, the US national public health agency established in 1946. It leads the country’s response to the Covid-19 pandemic.

The article’s text reads: “Via the words of the CDC’s own director Dr. Rochelle Walensky, vaccines are now failing, and vaccinated people may now carry higher viral loads than unvaccinated people, contributing to the spread of covid.”

Dr Rochelle Walensky became the CDC’s 19th director in January 2021. The centre describes her as an “influential scholar” recognised in part for her “work to improve HIV screening and care in South Africa”.

The article continues: “The vaccine hoax is now collapsing as vaccinated people are now catching the ‘delta’ variant and spreading it to other vaccinated people. Even worse, the vaxxed are the ‘super-breeders’ who are incubating yet more dangerous vaccine-immune covid mutations.”

Did Walensky really make this “confession”? We checked. 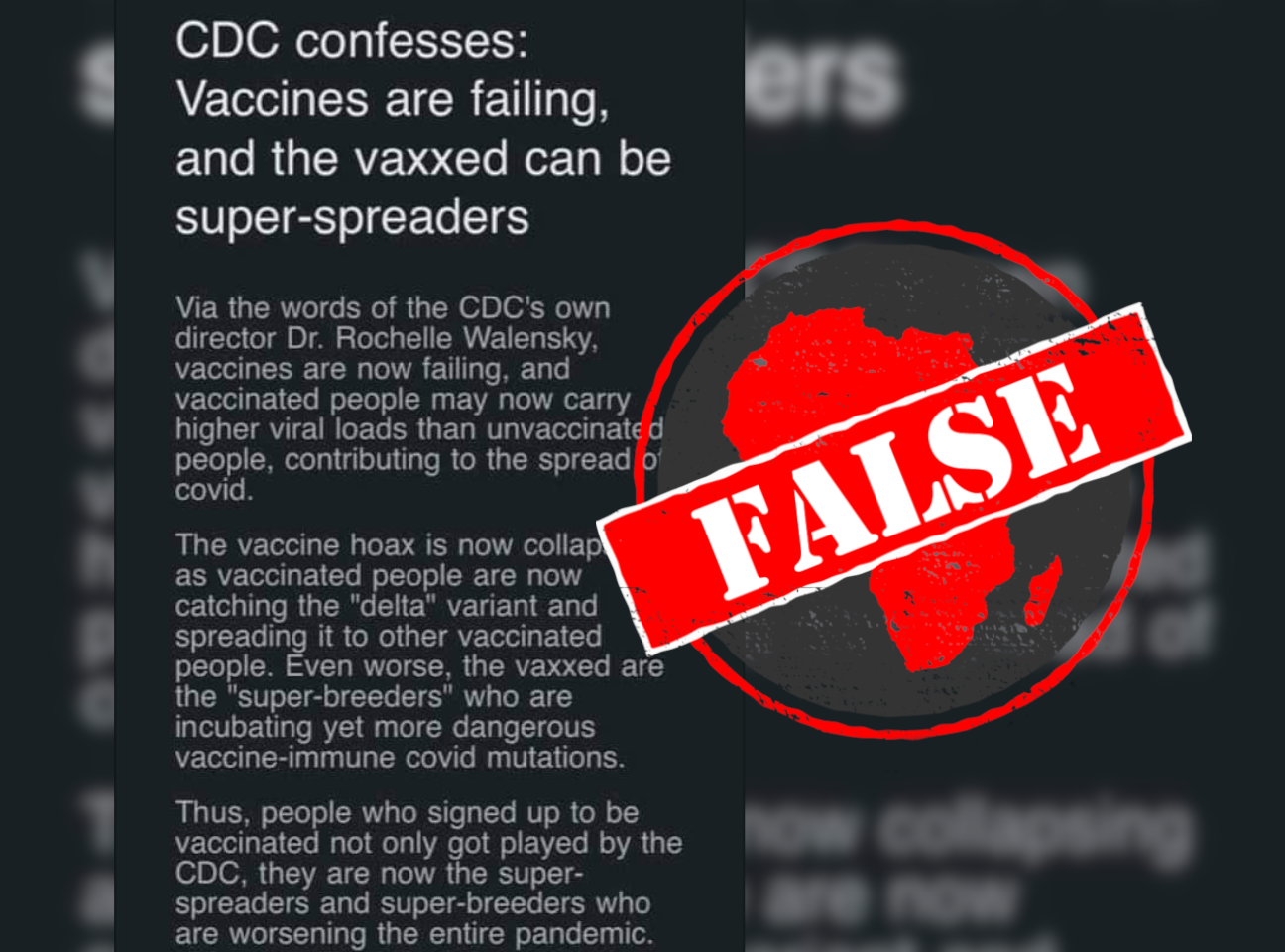 Some versions of the screenshot include the original URL of the article, on the site Natural News.

The article was published on 29 July 2021. It may have been edited after the viral screenshot was captured, as its headline is now longer.

It refers to the CDC’s updated guidelines on masks, first issued on 27 July, as the more contagious Delta variant of Covid-19 swept the US. The CDC had said in May that people vaccinated against Covid no longer had to wear masks. The Delta variant changed that.

The World Health Organization considers Delta a variant of concern, because it spreads more rapidly and may cause more severe Covid symptoms. Delta was first identified in India, in January.

In July, the Washington Post reported that more than 400,000 people in India – a possible undercount – had died from Covid, in an “outbreak that was driven in part by the more contagious Delta variant now gaining ground in the United States and around the world”.

The CDC’s reversal on masks was good public health advice, based on new evidence.

There is no evidence that the CDC “confessed” that Covid vaccines were failing, or that vaccinated people were super-spreaders.

She did say, in a 30 July media release, that CDC data had found that “Delta infection resulted in similarly high Sars-CoV-2 viral loads in vaccinated and unvaccinated people”.

She added: “High viral loads suggest an increased risk of transmission and raised concern that, unlike with other variants, vaccinated people infected with Delta can transmit the virus.

“This finding is concerning and was a pivotal discovery leading to CDC’s updated mask recommendation. The masking recommendation was updated to ensure the vaccinated public would not unknowingly transmit virus to others, including their unvaccinated or immunocompromised loved ones.”

And the CDC hasn’t owned up to any “vaccine hoax”.

‘One of the internet’s worst conspiracy sites’

But there is evidence that Natural News is a dodgy source of information.

Vox has described Natural News, based in the US, as “one of the internet’s worst conspiracy sites”. Facebook has banned the site, twice.

Health Feedback has published 10 checks of Natural News content. Seven are rated as “inaccurate”, one as “unsupported” and two as simply “incorrect”. Health Feedback also identifies Alex Jones, a notorious US conspiracy theorist, as a Natural News associate.

NBC News describes Natural News as “one of the most prolific pushers of the viral ‘Plandemic’ conspiracy video, which falsely claimed that the coronavirus is part of an elaborate government plot to control the populace through vaccines, and erroneously claimed that wearing a mask increases the risk of catching the coronavirus”.