A week before Kenya’s general elections on 9 August 2022, the United States embassy in Nairobi issued a security alert for US citizens, warning of “pre-electoral violence during election cycles”.

It added that, “out of an abundance of caution”, the embassy had “imposed movement restrictions on personnel in Kisumu”. Kisumu county is in eastern Kenya, on the shores of Lake Victoria. Its capital, also called Kisumu, is a popular tourist destination.

The region is the political bedrock of presidential candidate Raila Odinga, and has previously borne the brunt of election-related violence.

The day after the alert, a document began circulating on Facebook and Twitter in which the embassy seemingly withdrew the restrictions in Kisumu.

It has the seal of the US state department and is headed “Attributable to Embassy Spokesperson”.

The document says the “earlier routine statement” that advised “citizens not to visit Kisumu during the election” may have “created an erroneous impression that we have information of post-election violence in that city and therefore the presidential results in that poll”.

It ends with: “We unreservedly apologise to the people of Kisumu any members of the public and political class who may have been hurt by the alert. It is hereby withdrawn.”

But was the document really issued by the US embassy in Nairobi? We checked. 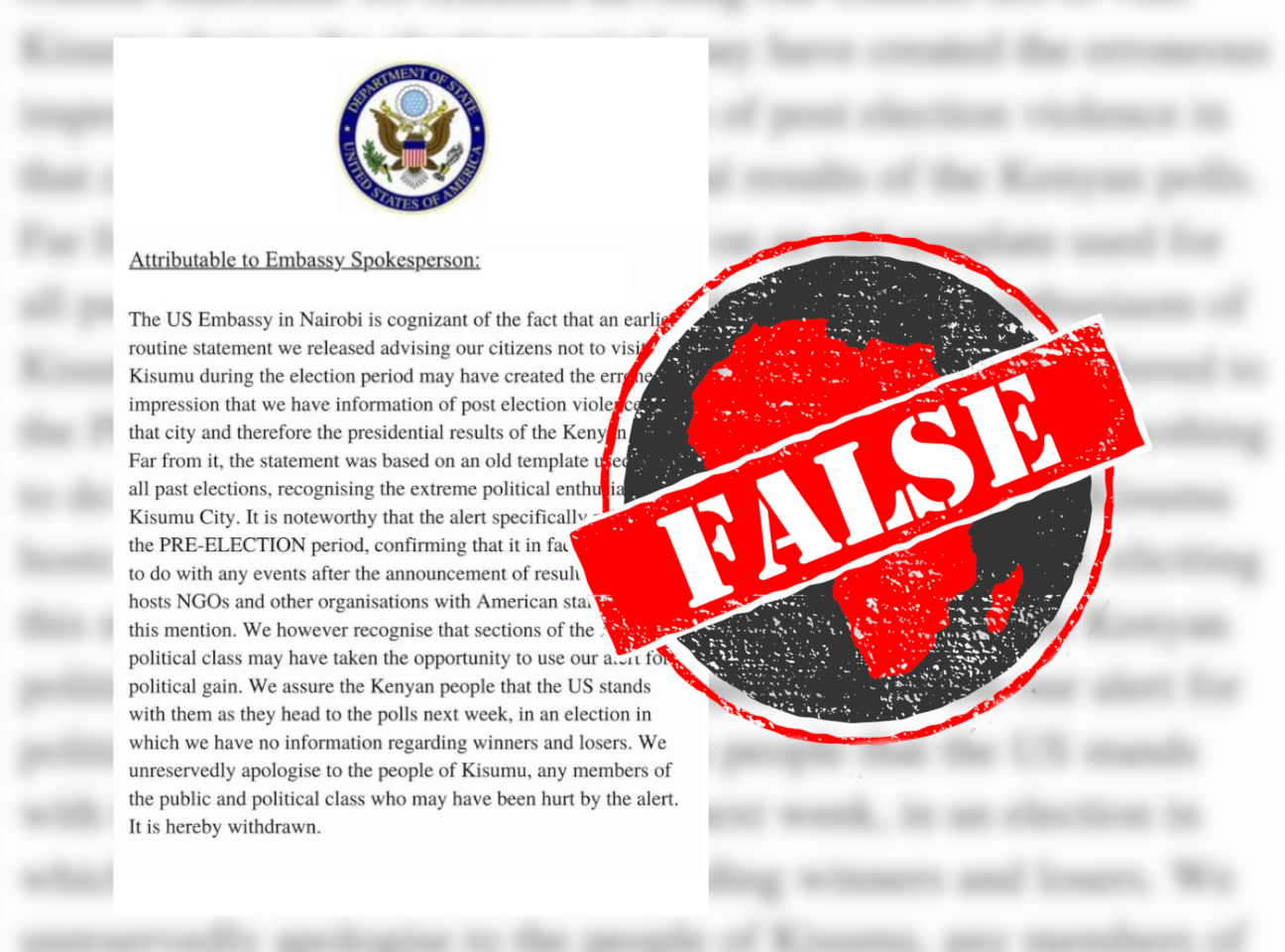 Embassy did issue update – but not this one

After the initial alert, Kisumu governor Anyang’ Nyong’o asked the US embassy to “absolve” the city. In a tweet, he also told visiting US citizens they would be safe in Kisumu.

“I want to assure those travelling to Kisumu that our people are very peaceful and looking forward to welcome you. Enjoy our beautiful sunset city!” the tweet reads.

The US embassy did issue an update to the alert, on 3 August, which can be seen on its website. But it is different to the one circulating on social media.

It too is headed “Attributable To The Embassy Spokesperson”, but it has the embassy’s seal – not the state department seal.

It reads: “The U.S. Embassy in Nairobi released a routine Security Alert on August 2 in advance of next week’s Kenyan elections. Alerts of this nature to American citizens are common ahead of elections throughout the world, and the United States has no information to suggest the security situation in Kisumu, or in any other parts of Kenya, have been adversely affected by election preparations.”

Also on 3 August, the embassy took to Twitter to warn that the document circulating on social media was fake.

“This statement circulating is false, please refer to our website for the actual statement: https://ke.usembassy.gov/update-on-security-alert/,” it tweeted. The warning was also posted on Facebook.