“A BIG VICTORY FOR FREEDOM IN THE UNITED STATES,” reads a message posted on Facebook in South Africa on 24 April 2021. “The Supreme Court overturned universal vaccination.”

It adds: “US infectious disease specialist Bill Gates, Fauci, and Big Pharma lost a US Supreme Court case, failing to prove all of their vaccines over the past 32 years were safe for the health of citizens!” It says the lawsuit was filed by “a group of scientists led by Senator Kennedy”.

The message quotes Robert F Kennedy Jr as saying: “The new COVID vaccine must be avoided at all costs.” He then supposedly warns that “the so-called latest-generation mRNA vaccines directly interfere with the genetic material of the patient and therefore alter the individual genetic material, which is genetic manipulation”.

Has the US supreme court recently ruled against “universal vaccination” in a case brought to the court by scientists led by Kennedy? We checked. 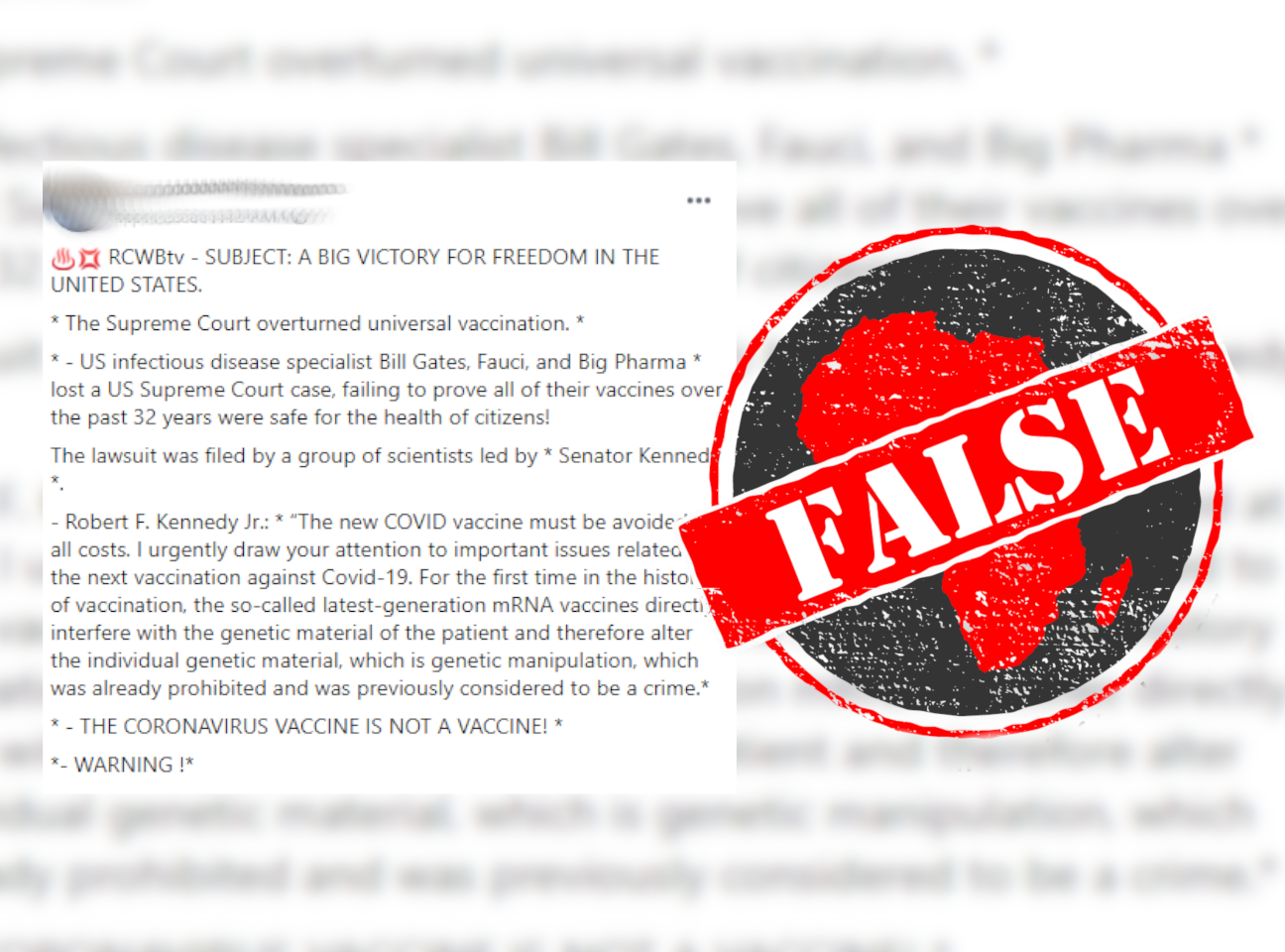 There is no record of such a case on the US supreme court’s website. It can’t be found in the opinions of the court for the current 2020 term, which runs from 5 October 2020 to 3 October 2021. It’s not in the 2019 term opinions either. The case doesn’t even feature in the supreme court’s list of cases “disposed of summarily by unsigned orders”.

And there is no such thing as “universal vaccination” in the US. Instead, vaccination laws are enacted on the state level, and generally apply only to health workers and school children, and only for specific diseases.

The US Centers for Disease Control explains these laws on its website, under the headings “State healthcare worker and patient vaccination laws” and “State school and childcare vaccination laws”.

And in December 2020, then president-elect Joe Biden said at a news conference that the Covid-19 vaccine would not be mandatory, or compulsory for all citizens.

In response to a reporter’s question about mandatory vaccination, he said: “No, I don’t think it should be mandatory. I wouldn't demand it be mandatory, but I would do everything in my power ... to encourage people to do the right thing.”

There are several other falsehoods in the message.

Robert F Kennedy Jr is not a senator, and never has been. He is an environmental lawyer and anti-vaccine activist. In February 2021 Kennedy was banned from Instagram for making false statements about Covid-19 and vaccines.

Despite this, the quote about mRNA vaccines attributed to Kennedy is false, as Africa Check has previously found. Kennedy never said mRNA vaccines “directly interfere with genetic material” and are a form of  “genetic manipulation” – and they aren’t.