“For those who don't know, Klaus Schwab is chairman of the World Economic Forum and wrote the book ‘Covid-19: The Great Reset’,” reads text on a graphic shared on Facebook in South Africa in late June 2021.

It adds: “This is not a conspiracy theory, It’s completely real. Do your research!”

It then shows a photo of a page of a book, which it says is “from book Klaus Schwab”.

A highlighted paragraph on the page reads:

At least 4 billion ‘useless eaters’ shall be eliminated by the year 2050 by means of limited wars, organized epidemics of fatal rapid-acting diseases and starvation. Energy, food and water shall be kept at subsistence levels for the non-elite, starting with the White populations of Western Europe and North America and then spreading to other races.

The population of Canada, Western Europe and the United States will be decimated more rapidly than on other continents, until the world’s population reaches a manageable level of 1 billion, of which 500 million will consist of Chinese and Japanese races, selected because they are people who have been regimented for centuries and who are accustomed to obeying authority without question.

Klaus Schwab is indeed the chair – and founder – of the World Economic Forum, which describes itself as “the International Organization for Public-Private Cooperation”. A global not-for-profit foundation based in Switzerland, the forum says it “engages the foremost political, business, cultural and other leaders of society to shape global, regional and industry agendas”.

And Schwab is a co-author of the book Covid-19: the Great Reset, which he wrote with French economist Thierry Malleret. The book was published on 9 July 2021. On Amazon, it is described as a “guide for anyone who wants to understand how Covid-19 disrupted our social and economic systems, and what changes will be needed to create a more inclusive, resilient and sustainable world going forward”.

But is the page in the graphic really from Schwab’s new book? 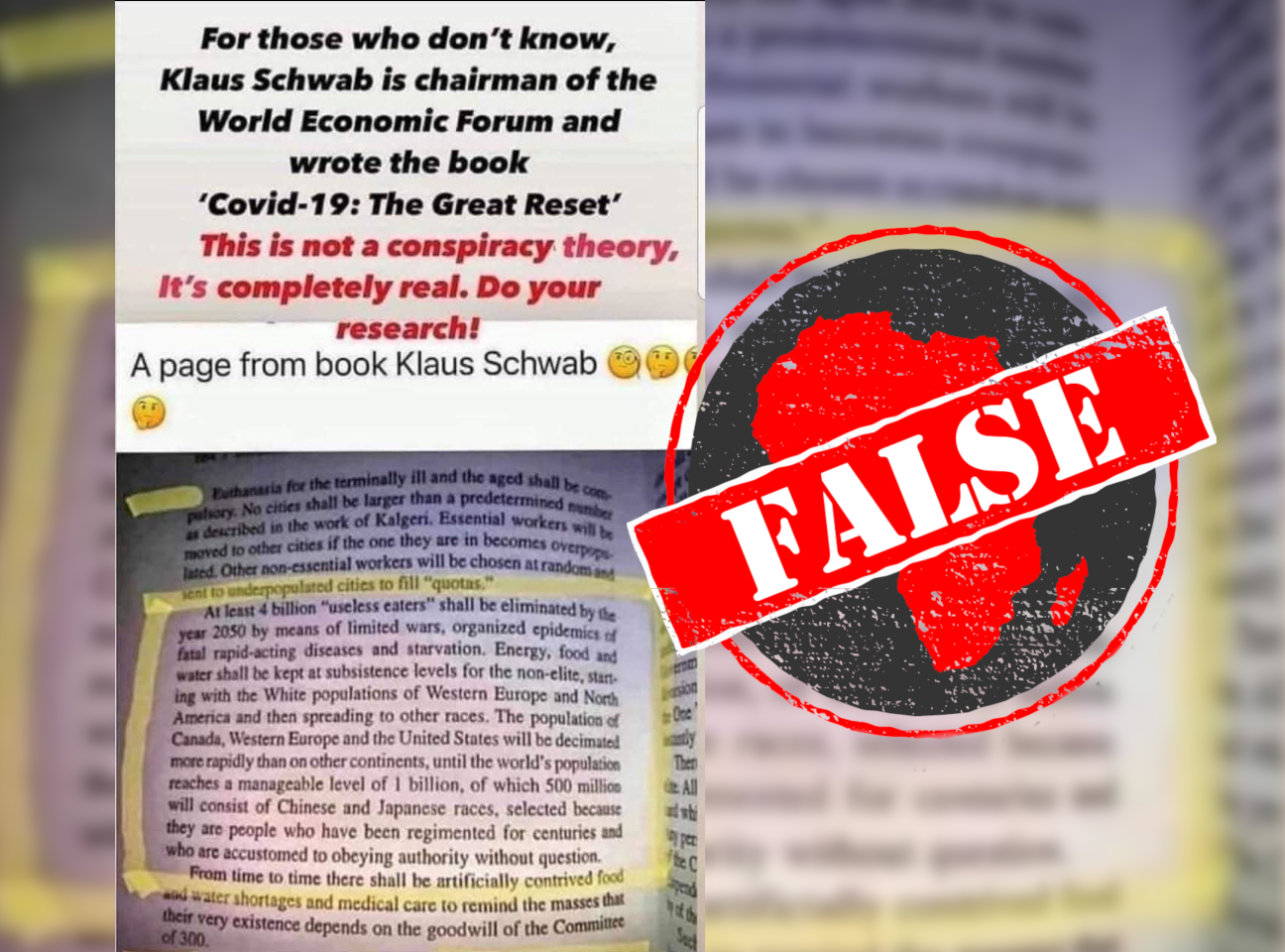 Conspirators’ Hierarchy: The Story of the Committee of 300

Africa Check entered the first sentence of the highlighted paragraph – from “At least 4 billion ‘useless eaters’” to “diseases and starvation” – into Google. The search brought up several results indicating that the passage is in fact from page 105 of Conspirators’ Hierarchy: The Story of the Committee of 300, a conspiracy theory book by a certain Dr John Coleman published nearly 30 years ago, in 1992.

One result, a thread on the r/conspiracy subreddit of the news aggregation and discussion forum Reddit, included a link to a full text PDF version of Coleman’s book – on the US Central Intelligence Agency’s website.

The book is in a CIA library collection of “materials recovered in the 2 May 2011 raid on Usama Bin Ladin’s compound in Abbottabad, Pakistan”.

A text search of the PDF for the “useless eaters” paragraph quickly located it at the bottom of page 105.

The paragraph is from Conspirators’ Hierarchy: The Story of the Committee of 300, published in 1992 – not from Schwab’s Covid-19: the Great Reset, published in 2021.