“If they can make fruit seedless, they can make YOU seedless too,” reads a graphic doing the rounds on Facebook. It shows photos of seedless melons above a photo of a hand in a surgical glove holding a syringe. It’s clearly a vague and unsubstantiated warning against Covid vaccines.

The graphic was sent in reply to an Africa Check tweet about our #KnowTheFactsGetTheVax vaccine information campaign.

The reply included this comment: “Genetically modified fruits have no seeds. Once you take the jab you also become a genetically modified product. Owned & patented by the state The vaxxinateds Human rights will disappear over night. The depopulation You will become seedless.” 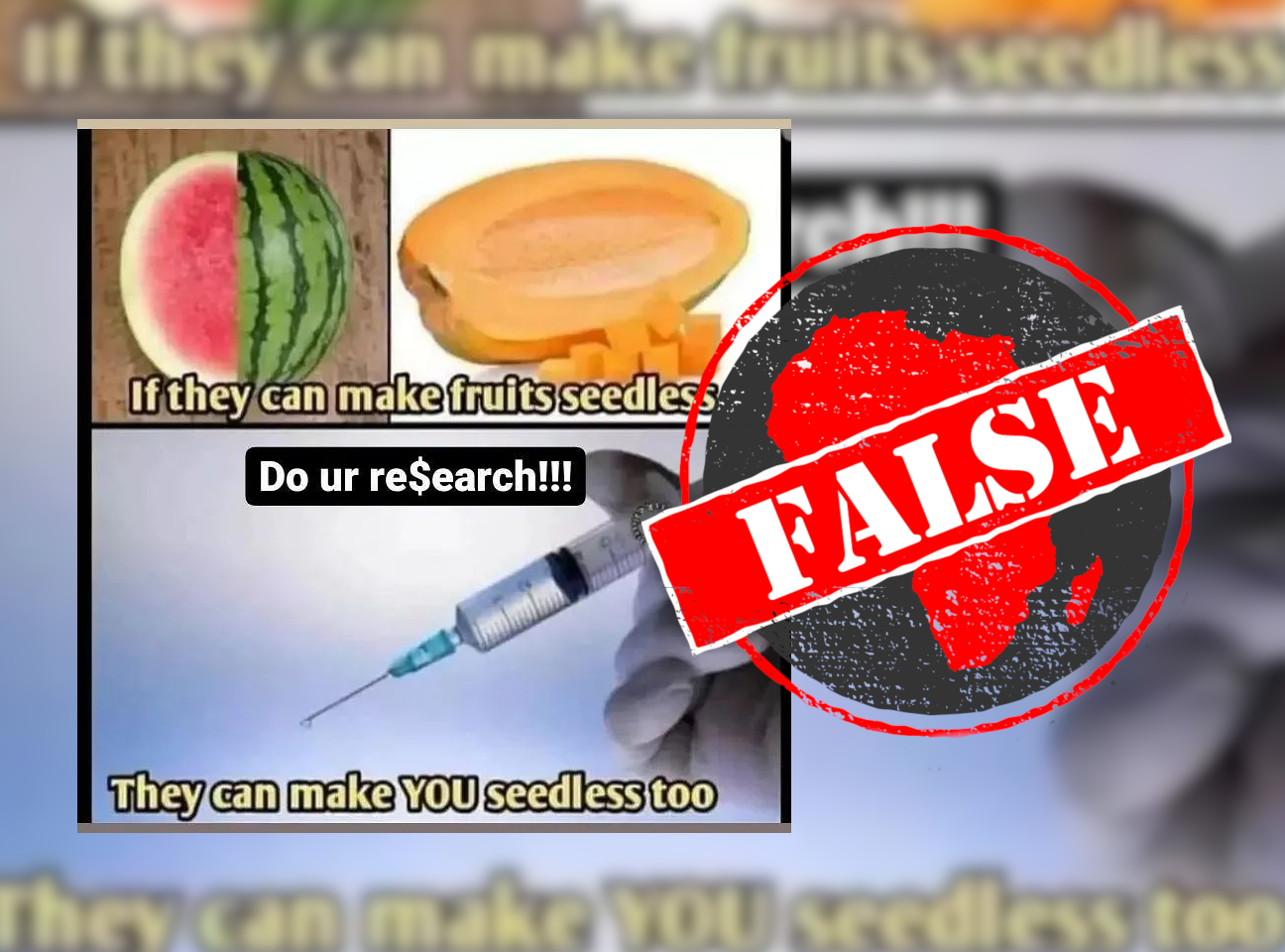 You are not a seedless fruit

Seedless fruit are not produced by direct modification of genes. As Michigan State University's College of Agriculture and Natural Resources wrote in 2019: “No current seedless plants are genetically modified organisms (GMOs)”.

Instead, many plants naturally produce seedless fruit, and seedlessness can be cultivated in the same way that humans have cultivated other qualities in agricultural products.

Seedlessness is a genetic trait. Michigan State explained that it is a “heritable trait carried on through pollen and maintained in the gene pool until the right parental combination again occurs to produce a plant with seedless fruit”. But instead of directly modifying the DNA of a plant, humans have simply cultivated plants to favour genes that produce seedless fruit.

Seedless fruit can also be produced in other ways. Some plants produce seedless fruit if their flowers aren’t pollinated – something people can control. And Encyclopedia Britannica notes that some seedless fruit have been produced by exposing a plant to certain hormones since as early as 1934.

People may be infertile – meaning that they can’t achieve pregnancy. But infertility in people has a far different cause than infertility in fruit. There is no evidence that vaccines against Covid-19 – or any other common vaccines – can cause infertility.

It is a myth that Covid-19 vaccines can alter human DNA. This claim, which usually targets mRNA vaccines, has been repeatedly debunked, including by Africa Check.

Messenger RNA, or mRNA, is a molecule that carries genetic information. But it is not the same as DNA, which stores an organism’s genetic material. Instead, mRNA contains instructions to the body to build specific proteins.

Covid-19 mRNA vaccines typically contain the instructions to build the “spike protein”, a distinctive structure on the outside of the virus. This allows the body to build the spike protein, and develop defences against it.

Scientists at the Meedan Digital Health Lab have said: “To alter the human DNA, one would need to introduce genetic material from another organism into the nucleus of the cells of the human body which contains their natural DNA.”

The mRNA in Covid-19 vaccines does not enter the nucleus of the cell, and breaks down in about 72 hours.

No, mercury and aluminium are not toxic when used in vaccines