A 30-second video was shared on Twitter in Kenya with claims that it showed chaos in the town of Eldoret after the country’s deputy president visited Kisumu county on Lake Victoria.

The tweet, published 11 November 2021 and in a mix of Kiswahili and English, reads: “This followed in Eldy after yesterday's chaos huko Kisumo targeting William Ruto. Stakijua what that means …”

This loosely translates to: “This followed in Eldoret after yesterday's chaos in Kisumu. You don’t want to know what that means …”

The video shows a busy street, thronged with people. A chant is heard in the background and suddenly most of the people in the street crouch down. The call-and-response chant, like a war cry, continues for the rest of the video. At the end of the video the crowd starts walking down the street towards the camera.

Rumours started spreading on social media that Eldoret youth retaliated in support of Ruto after the incident in Kondele. Eldoret is the deputy president’s hometown.

But what does this video show? 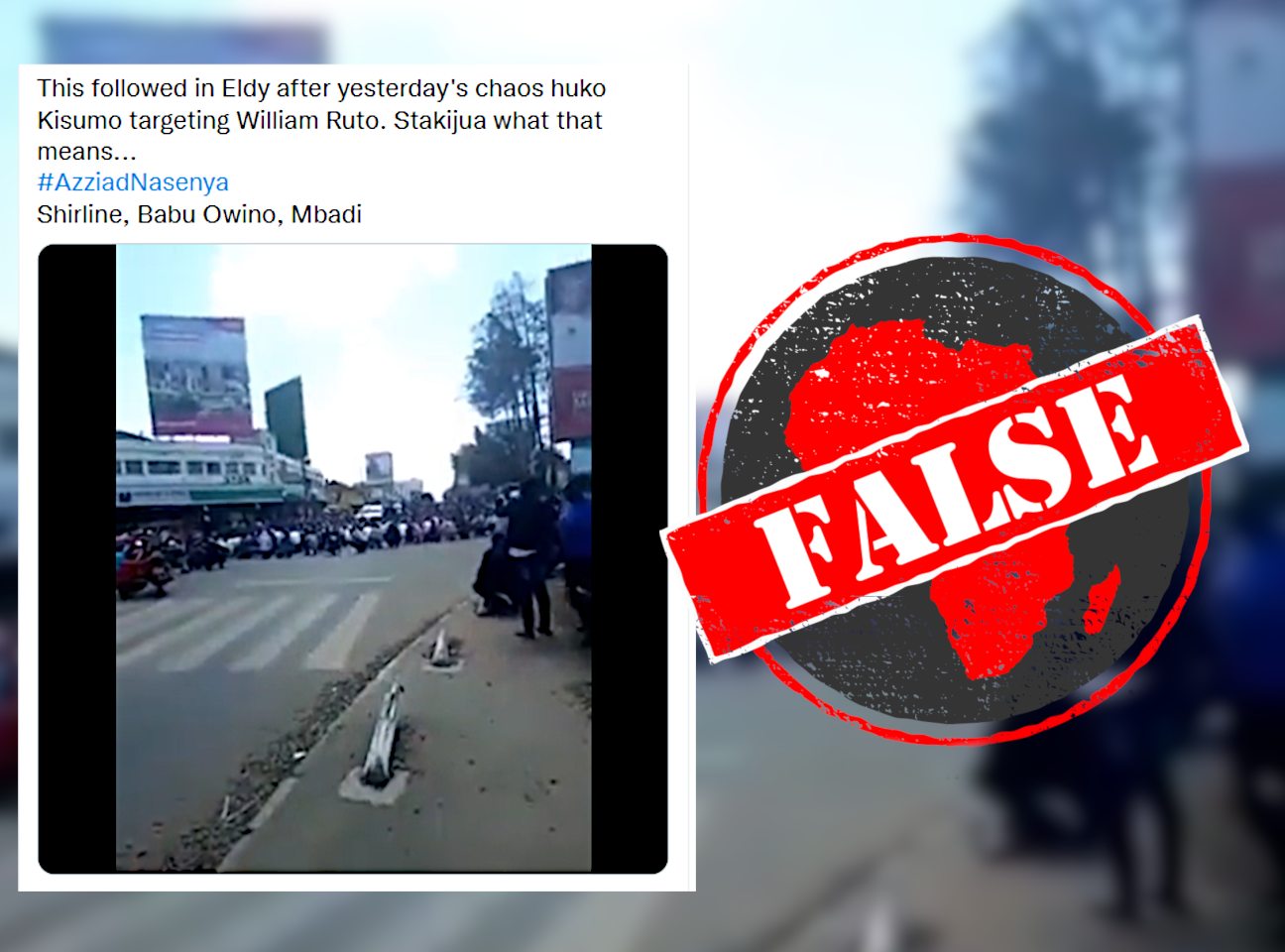 One red flag is that the people in the video are not wearing masks in public, indicating that the video may be from before the Covid-19 pandemic.

Wearing masks in public is mandatory in Kenya as part of attempts to curb the spread of Covid-19. The order was enforced on 6 April 2020, when a legal notice by the ministry of health was published.

Africa Check extracted frames from the video using the InVID WeVerify tool and ran them through Google’s reverse image search. This revealed that a longer version of the video had been posted on Facebook on 1 May 2021.

Part of the caption reads: “This ceremony known as Cheptilet, can only be done in sacred areas selected by elders who lead the event, not just anyone. It is now one year to elections and I do not want Kapjimmy in UDA to misuse our traditions for political expediency again.”

We searched YouTube with the keyword “Cheptilet videos in Eldoret” and found a similar video posted on 23 April 2017.

This video is captioned: “Mandago leads youth in a circumcision ritual song in Eldoret town after failed nominations exercise.”

The video was also published in an article by the Star, a Kenyan newspaper, on 24 April 2017.

According to the article, elders from the Kalenjin ethnic group criticised Uasin Gishu governor Jackson Mandago and Nandi Hills member of parliament Alfred Keter “for leading hundreds of youth to perform a cultural ritual on the streets of Eldoret town to protest against alleged rigging of Jubilee Party nominations”.

This video does not show protests in Eldoret following Ruto’s 2021 visit to Kisumu county, but is from 2017.