IN SHORT: Despite presenting an overwhelming amount of information about what they’re supposedly made of and how they work, rings sold with the promise of “weight loss” or health benefits will have no effect on the body.

Africa Check has debunked plenty of weight-loss scams in the past, including magnetic jewellery advertised for its fictional weight-loss powers.

Because of this, weight-loss rings that supposedly use “charged particles” to quickly and easily encourage weight-loss caught our attention.

The rings, advertised on Facebook under the name “Frostaly” and other names like “Céleste potassium ion spinner ring”, are supposedly made of the elements titanium and potassium. But do they actually work? 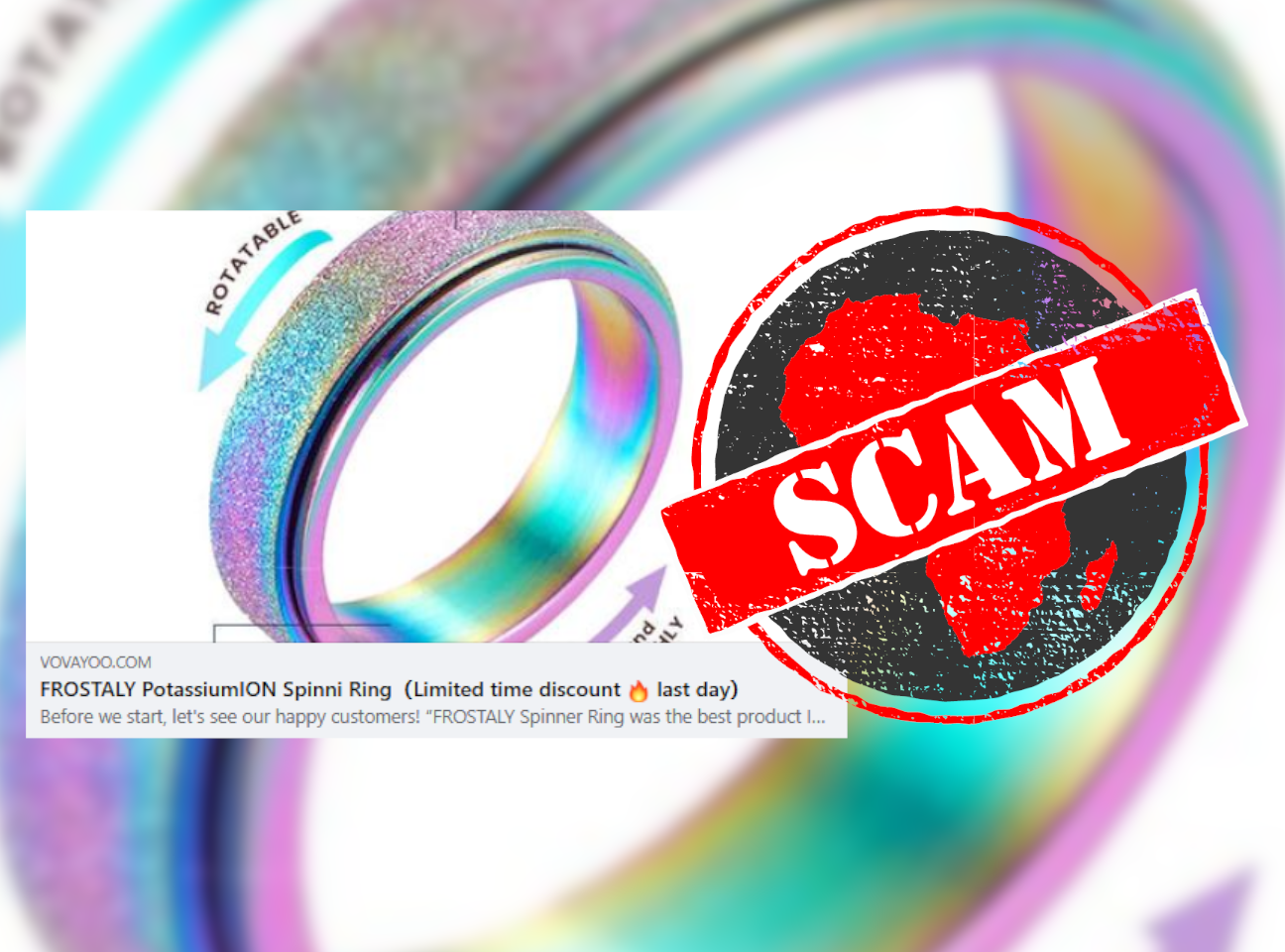 Frostaly links to sales pages which are very similar to the magnetic jewellery scams Africa Check has debunked in the past. These sites are “powered by” Shopify, a web commerce company.

As we have reported, it is often claimed that magnetic jewellery can affect blood flow by exerting a magnetic force on the iron present in human blood.

However, these types of magnet have been repeatedly found to have no noticeable effect in relieving pain and no effect on blood flow. There is no evidence that they are able to affect the body at all, let alone that they can promote rapid weight loss.

The Frostaly sales pages are vague about how the rings are supposed to work, but it is clear that they rely on the same false claims about magnets. These sites even repeat false claims that “magnetic fields” generated by the rings improve blood flow.

Not only has magnetic jewellery not been shown to have any effects on health, but there’s nothing to suggest that these rings could even generate a magnetic field.

The Frostaly ads and store pages often mention charged particles, known as ions. Ions are particles with an electric charge. Any atoms or molecules can theoretically be ionised, or given this kind of charge. Frostaly rings are supposedly made of ions of the elements titanium and potassium.

Electricity and magnetism are related, and a magnetic field can be generated by a moving electric current. This phenomenon makes electromagnets possible.

These ads imply that spinning a ring containing charged ions creates a magnetic field. But this is not true. Ions bound up in a material do not make that material charged.

Ordinary salt, for example, is made up of positively charged sodium and negatively charged chlorine. But because they are bound together in equal amounts, and evenly distributed through a salt crystal, salt does not carry any electrical charge.

But even if these charged ions could give the rings a charge, they would quickly be neutralised by other charged particles, which are abundant in nature. This is also why objects which have built up a static charge, such as a plastic balloon rubbed on your hair, do not stay charged forever.

These false claims about magnetism are just some of the claims Frostaly vendors make. The strategy behind these ads seems to be to make so many unproven claims that the potential buyer doesn’t bother to fact-check any of them.

We said before that these ads are vague about how their products are meant to work, and this seems to be by design. The ads make several different claims, seemingly with the aim of overwhelming a user.

Some of the ads claim that the titanium in these rings “penetrates deep” into the skin and that it “transfers minerals easily into the body”. This is misleading. Even if the body could absorb a significant amount of titanium from a ring worn on the finger, there is no reason to expect this would affect the wearer’s health.

Titanium is commonly used in dental and medical implants because it reacts very little with the body, though there are some indications that it may occasionally cause negative reactions.

These rings, no matter what they’re made of, will not have the health or weight loss benefits described.