A video originally shared on TikTok and later posted to Facebook appears to show the director general of the World Health Organization (WHO) saying that booster vaccines against Covid-19 “kill children”.

In one Facebook post the video – which has been viewed more than 400,000 times – is captioned in Afrikaans. It reads: “Julle wat so in die vaxx glo skrik wakker asb. Hoor sy woorde.”

This roughly translates to: “All of you that believe in the vaxx, please wake up. Listen to his words.”

But this claim is untrue. Dr Tedros Andhanom Ghebreyesus was speaking about the importance of vaccines in saving lives, and did not say they “kill children”. He misspoke and the clip has been taken out of context. 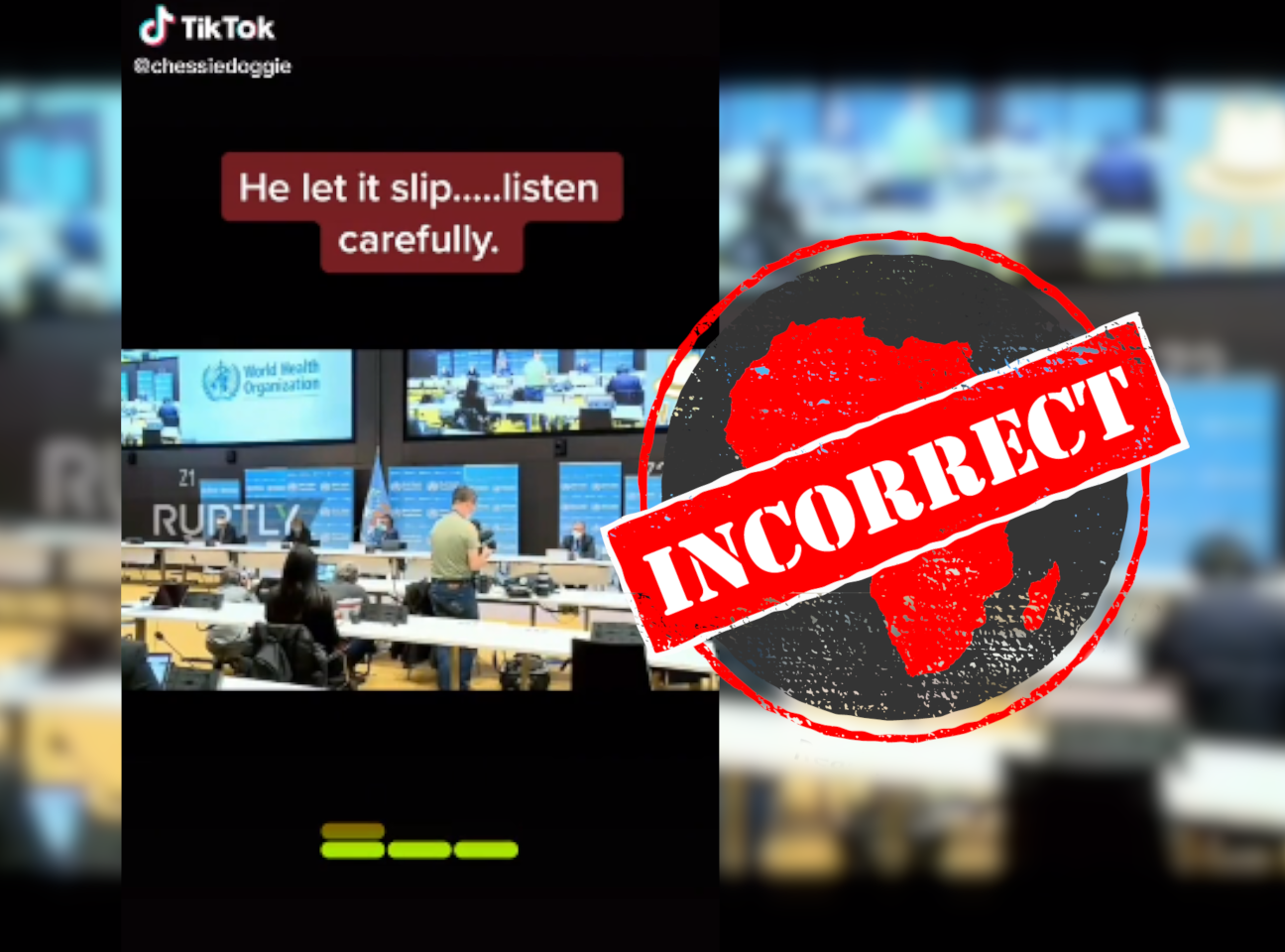 The clip is from a much longer video of Ghebreyesus speaking at a media briefing at WHO headquarters in Geneva, Switzerland, on 21 December 2021.

The official transcript of the briefing reads: “There is new evidence emerging now of [the vaccine booster’s] benefits, especially with elderly groups, senior citizens, especially above 65 and above 60. So, if it’s going to be used, it’s better to focus on those groups who have the risk of severe disease and death, rather than, as we see, some countries are using to give boosters to children, which is not right.”

Speaking live, Ghebreyesus mispronounced the word “children” before correcting himself. It is clear from the video and audio of the press conference that Ghebreyesus was not genuinely suggesting that booster vaccines kill children. This was also confirmed by a WHO spokesperson.

A WHO spokesperson told the BBC that Ghebreyesus “got stuck on the first syllable ‘chil’ and it came out sounding like ‘cil/kil’”.

The spokesperson said: “He repeated the same syllable, with it coming out ‘cil-children’. Any other interpretation of this is 100% incorrect.”

The claim that Ghebreyesus said vaccines are being used to kill children is incorrect. It has also been fact-checked by other fact-checking organisations like Snopes and Check Your Fact.

But what was actually being discussed in the clip being shared out of context?

Statement was about unequal access to Covid-19 vaccines globally

Ghebreyesus’s comments were part of a longer statement about booster vaccines. These are an additional dose or doses of a vaccine given to a person who has been fully vaccinated, to prevent waning immunity.

The director general had been asked why he had recommended a moratorium on Covid-19 booster vaccines in 2021, while several countries around the world, including the US, Switzerland and Germany, had recommended them.

Dr Bruce Aylward, senior advisor to the director general, had explained that the WHO’s call for a moratorium on booster vaccines was “an equity issue”, saying that while “there will be a role for boosters”, much of the world had not yet been vaccinated, and that “the goal right now is to ensure everyone gets their first doses”.

Ghebreyesus was repeating this sentiment. He said: “Instead of boosting a child in high-income countries, it’s better to vaccinate the elderly in countries where the elders have not been vaccinated.”

Some countries boosting, while others yet to launch vaccine programmes

This approval process, like the approval process for all vaccines, requires that the vaccines undergo large scale clinical trials to show that they are safe and effective. Covid-19 vaccines have repeatedly been demonstrated to be safe, and are not known to cause death in people of any age.

This is linked to the concept of vaccine equity. It has nothing to do with the safety of vaccines and is not incompatible with the use of booster vaccines. The WHO has instead recommended that the initial use of booster vaccines be “targeted to the population groups at highest risk of serious disease and those necessary to protect the health system”.