IN SHORT: Articles claim the herb coriander, also known as cilantro or dhania, is a cure-all for everything from Alzheimer’s to trouble sleeping. But while there are some encouraging research findings, it’s too early to rely on the pungent plant for miracles.

“CILANTRO IS POWERFUL FOR PREVENTING ALZHEIMER'S, LOWER BLOOD SUGAR AND STOP INSOMNIA” reads the bold headline of an article on a website called Juicing for Health.

The article was last updated in 2017, but links to it have been circulating on social media in 2022, including here, here and here. Some have been viewed over 21,000 times in just a few months.

More versions of the claim were accompanied by links to other websites or to a YouTube video presenting the article in audio format.

Coriander, known as cilantro in North America, is commonly used in kitchens around the world. The herb’s leaves and stems boast a strong flavour, and its milder seeds are often used as a dried spice. Historically, the herb has also been used to treat the symptoms of a variety of maladies.

Could this ordinary kitchen herb really help prevent a major disease, lower blood sugar and cure a sleep disorder? We looked into it. 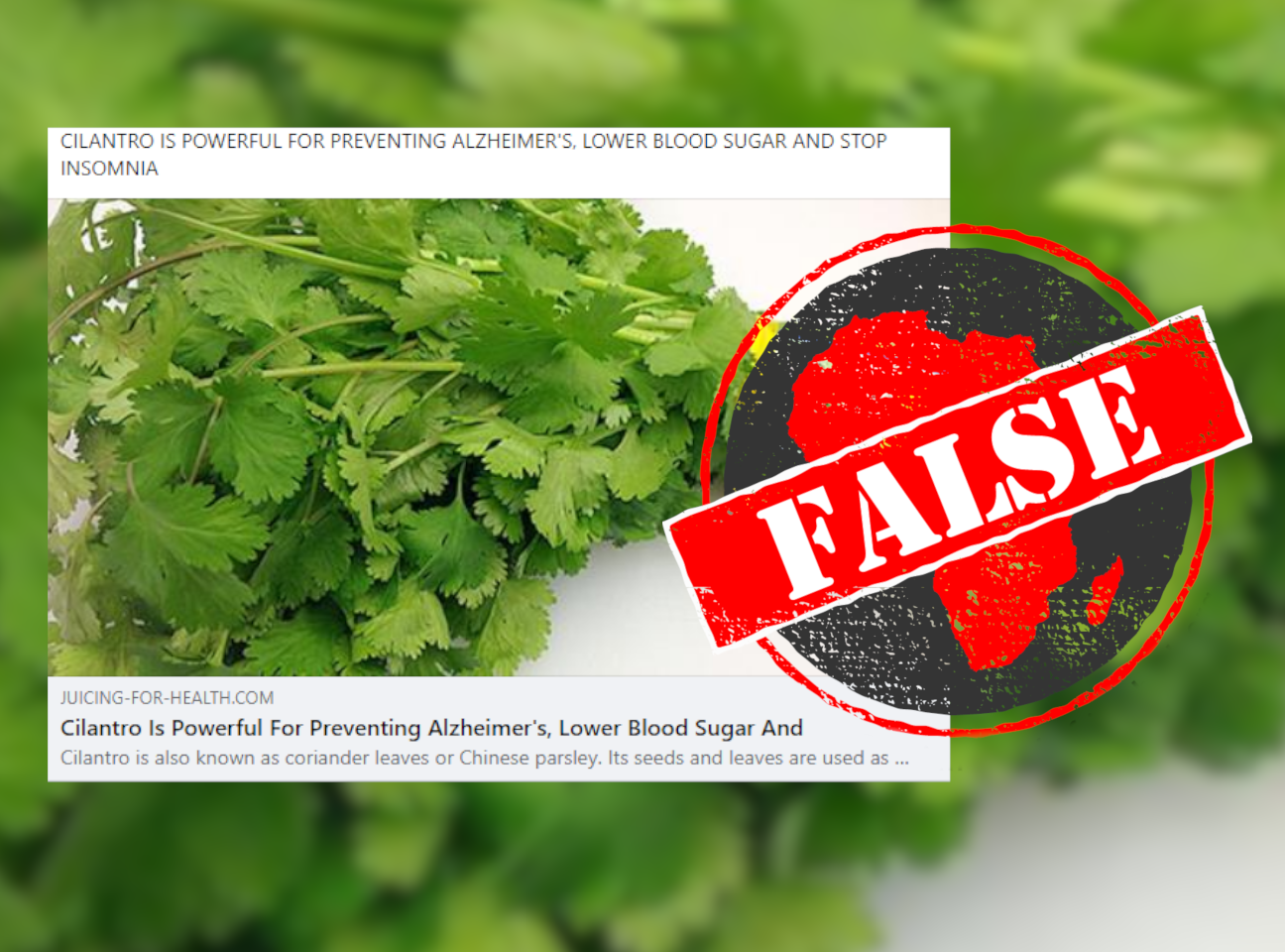 Scientific studies have investigated the herb’s effects on cancer and skin cells, pain and inflammation, and fungal infections, with promising results, but nothing conclusive.

In the past coriander was sometimes used to relieve insomnia. Some studies do suggest that the herb, or a key ingredient in it called linalool, could have relaxing and sedative effects. But these studies reflect early research, and have mostly been conducted in mice.

Test tube and rodent studies have also found that some ingredients in coriander can lower blood glucose levels, and so could help manage diabetes. But much more research is needed before any conclusions can be made.

Corianders could help with Alzheimer’s … in rodents

Other studies have investigated the potential effects of coriander on memory loss generally, and Alzheimer’s more specifically.

Alzheimer’s is a disease that affects the brain, over time slowly damaging a person’s memory and ability to think properly. Scientists don’t know exactly what leads to someone developing Alzheimer’s, but it usually affects people later in life.

There is some evidence that a healthy diet and lifestyle might help protect against Alzheimer’s. Medications are used to manage the symptoms of the disease or slow its progression, but there is no cure for it.

Coriander and specifically linalool, found in coriander, have been studied for their potential effects on Alzheimer’s, both in rodents where Alzheimer’s had been “induced” and on rodents without induced Alzheimer’s.

The research has been promising, showing improvements in memory and learning, but it has only been done in rodents. And there is good reason to be cautious with this type of research. Studies done on humans often get different results than initial drug studies on rodents.

Despite bold claims of its healing properties, there is not enough scientific evidence to suggest that coriander is effective in reducing insomnia, preventing Alzheimer’s or lowering blood sugar – unless you’re a mouse or a rat. More research is needed, in humans, and with large sample sizes.

Although a healthy diet and lifestyle can help prevent a range of diseases, focusing on the effects of any single food or nutrient might not be helpful. As Medical News Today says: “It is better to eat a varied diet than to concentrate on individual foods as the key to good health.”

No, garden eggs, cucumbers and okra not a remedy for high blood sugar