Warning: This report links to graphic and distressing photos, videos and news articles.

“How Ukrainians murdered Chechnya Muslims in cold blood,” begins the caption of a low-res video posted on Facebook in Nigeria.

The video shows soldiers laughing as they push around a clearly fearful woman and man. Burning buildings can be seen in the background. Moments later they shoot the man. The woman collapses on his body, screaming. They shoot her as well.

For those who are asking why the Chechens are supporting Russia in fighting Ukrainian Nazis inside Ukraine?

This is an old footage and a very heartbreaking one as it shows how the Ukrainian Nazis once upon a time invaded Chechnya and killed many Chechen Muslims. Here in this video a Chechen Muslim parents were martyred right in front of their daughter.

Today the Chechens are well equipped and battle hardened and they are in Ukraine in order to avenge and eradicate the Nazis, the virus which once inflicted atrocities on their love ones.

None of this is true. The video is a work of fiction and the people in it are actors.

We’ll explain why. But first, some background. 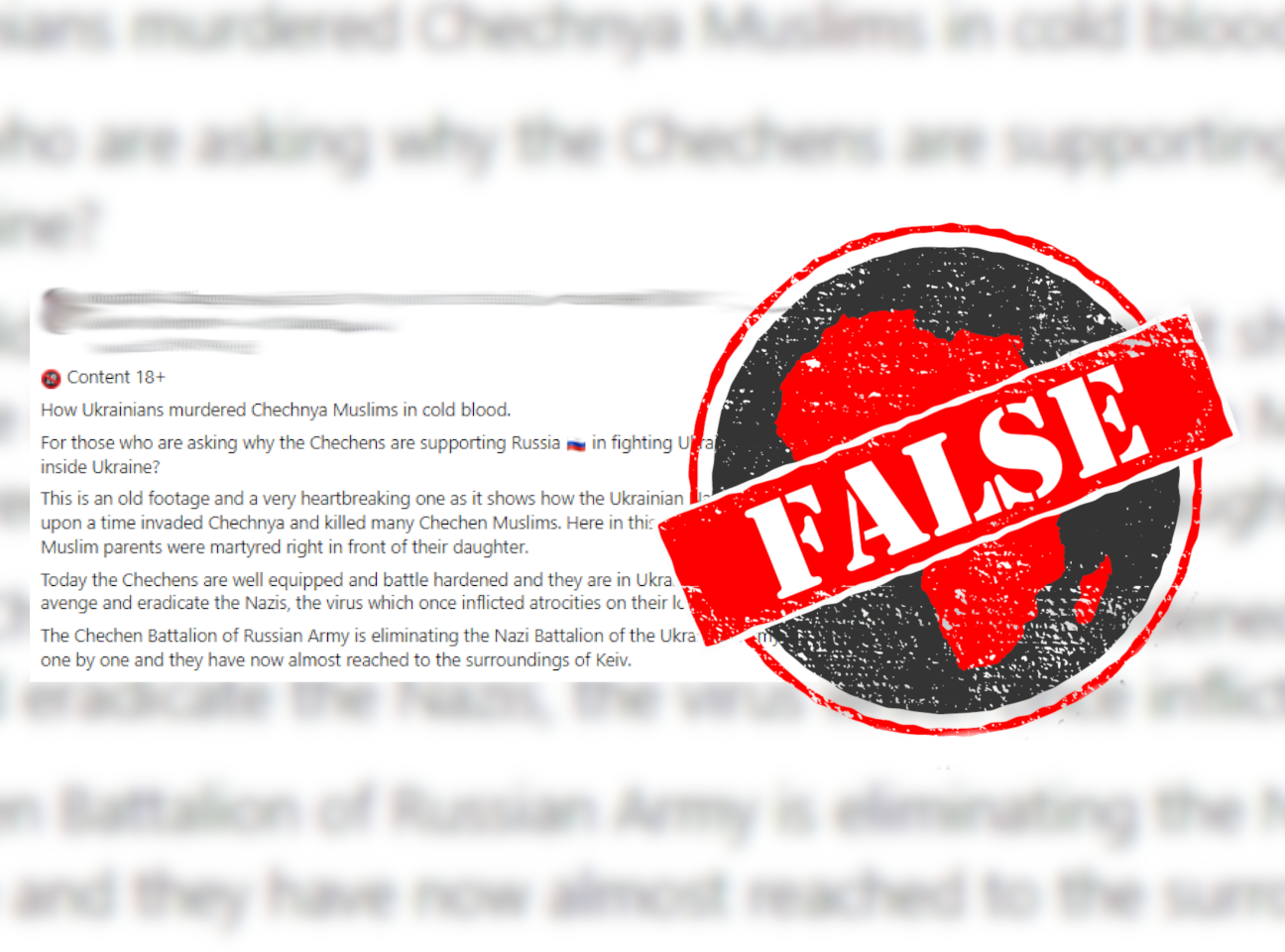 The tiny country of Chechnya has a centuries-long history of conflict with Russia. Today it is part of the Russian Federation, lying in Russia’s far southwest. Its people are primarily Muslim.

Like Ukraine, Chechnya was once part of the USSR, the Russia-dominated Union of Soviet Socialist Republics. Russia has invaded Chechnya twice since the Soviet Union fell apart in 1991. Both wars were brutal.

The first Chechen war of 1994 to 1996 began when Chechnya rebelled against the Russian Federation. It won – at the cost of tens of thousands of mostly civilian lives.

But this independence was quickly lost. Three years later, in 1999, Russia again sent tanks and bombers into Chechnya. The second Chechen war ran for 10 years, until 2009.

Both sides committed atrocities, but tens of thousands more ordinary people were again killed by Russian weapons. The war ended with Chechnya being absorbed into the Russian Federation.

Ukraine lies on Russia’s western border. As mentioned before, it was also once part of the USSR. It gained independence in 1991.

On 24 February 2022, Russia invaded Ukraine. Russian president Vladimir Putin said one aim of the invasion was to “denazify” Ukraine.

There is no evidence that Ukraine is ruled by Nazis. Volodymyr Zelenskyy, its democratically elected president, is Jewish, as is his chief of staff Andriy Yermak. Both lost family in the Holocaust.

Russia’s invasion has seen extensive destruction of Ukrainian cities, towns and villages. Houses, apartment blocks, schools and hospitals have been reduced to rubble by Russian weapons. Video evidence of these and worse war crimes have circulated online since the start of the war.

More videos began to surface in early April. They show the bodies of civilians murdered by Russian troops around Kyiv, the capital, in areas retaken by Ukrainian forces. Some bodies are burned, some have their hands tied. There are reports of rape and torture.

The International Criminal Court lists actions that are war crimes. They include:

Chechen forces have joined Russia’s invasion of Ukraine. They are led by Ramzan Kadyrov, Chechnya’s president and once the leader of Chechen rebels against Russia.

The video is related to war in Chechnya, but only because it’s a clip from The Search (2014), a war drama written and directed by French filmmaker Michel Hazanavicius.

The film’s IMDB synopsis reads: “A French woman who works for a nongovernmental organisation forms a special relationship with a lost young boy in war-torn Chechnya in 1999.” That would make it set during the second Chechen war.

The movie can be seen on YouTube. Here the clip posted on Facebook begins at around the 3:35 mark. It's in far higher resolution.

The Search is fiction, though set in a real war. But it’s worth pointing out that right at the beginning it specifically identifies the men who kill the man and woman as Russian soldiers.

And the caption’s claim that “Ukrainian Nazis once upon a time invaded Chechnya” is incorrect.

Members of ultra-nationalist Ukrainian militias did reportedly join, as mercenaries, the invasion that started the second Chechen war. But Ukraine gained independence in 1991. It was Russia that invaded Chechnya in 1994 and 1999.