A graphic circulating on Facebook in South Africa and Nigeria sounds a warning to biscuit lovers. It claims that “biscuits called crunches” shipped from South Africa to Nigeria have “killed 45 people” and contain a “poisonous chemical”.

The graphic, also forwarded to Africa Check on WhatsApp in February 2022, includes photos of biscuits, an image of a child who appears to be covered in blisters or warts, and an image of a humanoid head covered in something like warts or scales.

While the text in the graphic doesn’t draw any connection between eating the biscuits and the photos, the implication is clear – these cookies can kill! But is this true? 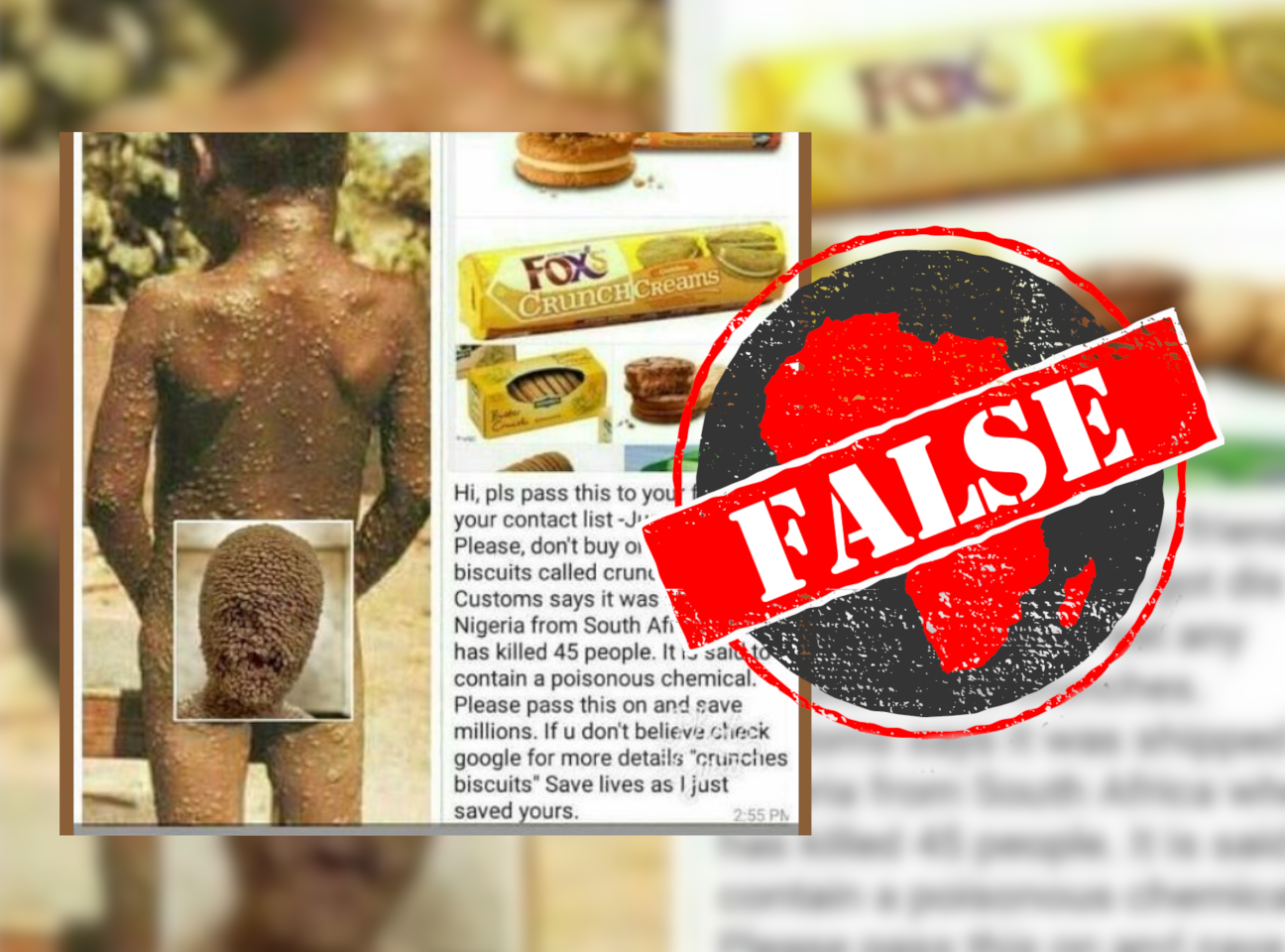 Crunch Creams not from South Africa

While the text in the graphic mentions “biscuits called crunches” and suggests Googling “crunches biscuits”, it shows a package of biscuits branded Fox’s Crunch Creams.

The biscuit brand Fox was not familiar to the South Africans in our office. This was the first red flag that something hoaxy might be afoot.

We Googled the name and found the UK-based Fox’s Biscuits and their product Fox’s Golden Crunch Creams. While a shipment of biscuits could have reached Nigeria from the UK via South Africa, this seemed unlikely to us.

South Africans are more likely to be well-acquainted with oats-and-coconut biscuits called crunchies. But these are typically homemade, often according to a family recipe, and unlikely to be exported anywhere.

Next we tried to trace the other photos in the graphic. We first searched for the photo of the blistered child with the wart-covered head superimposed on it, but came up empty.

However, when we cropped out the head and searched for this image alone, we were luckier. We found a number of clearer copies of the image, where it’s clear this is a head covered in hundreds of human teeth.

The photo has been widely shared online with a caption, meant to be humorous, suggesting parents show it to their children if they ask what the tooth fairy looks like. (Warning: This is likely to cause nightmares.)

A little more online digging revealed the photo is in fact of a fictional character from a 2016 TV series called Channel Zero: Candle Cove. The scary face has nothing to do with eating biscuits, crunchy or otherwise.

We were by now almost certain the warning in the graphic had no basis in fact, but we also Googled “crunches biscuits”, as the message asks readers to do.

It reads: “If u don't believe check google for more details ‘crunches biscuits’ Save lives as I just saved yours.”

But all this led to were other examples of the same claim, in one instance shared on a Nigerian message board, and recipes for crunchies.

We found the same claim debunked as a hoax in 2016 by South African newspaper the Northern Natal News. The newspaper was clear: “There are no poisonous crunches biscuits killing citizens.”

The claim was also labelled a hoax in 2019 by the website SYY Hoax Analyzer.

This is a claim that has been circulating since at least 2016 and it is still entirely false.