“Two killed in Orlu massacre, Nigerian Army why???” reads a tweet sent from Nigeria on 18 February 2021.

It shows two distressing photos of what appear to be dead people, both lying on their backs. The first seems to be a man, the second a woman.

The tweet was posted just hours after rumours of conflict in Orlu, a town in the southeastern Nigerian state of Imo, started circulating on social media.

That morning, the hashtag #Orlu began trending with claims that Nigerian security forces were bombing the town from the air.

Later in the day, newspapers reported that the Nigerian army had sent soldiers and helicopters to search for Eastern Security Network camps in forests near Orlu.

The Eastern Security Network is a militia set up by the outlawed Indigenous People of Biafra.

But do the photos show victims of a Nigerian army massacre in Orlu on 18 February? We checked. 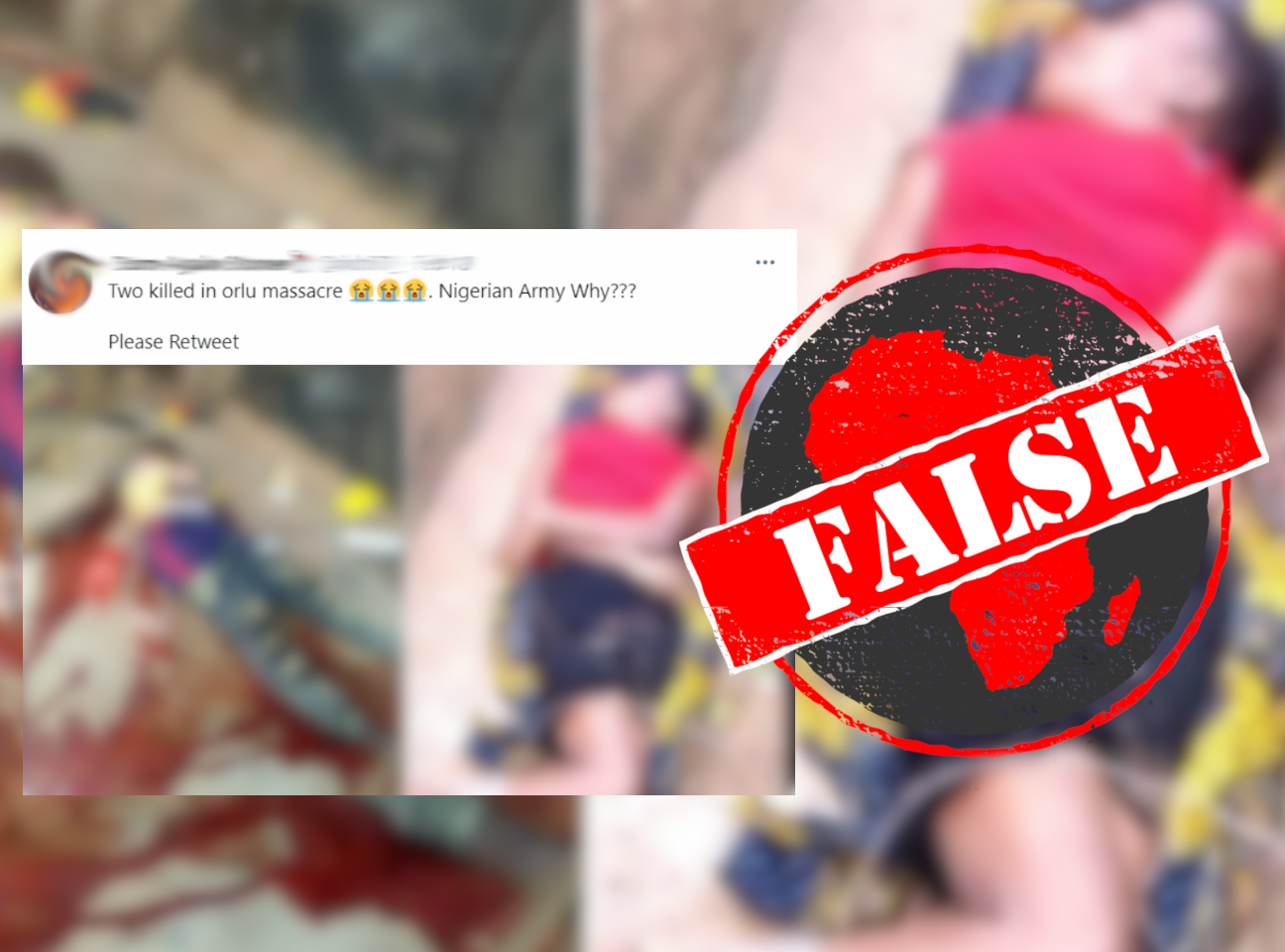 Google reverse image searches reveal that both photos have been online since before 18 February.

The photo of the woman is at least three years old, as one Twitter user pointed out. It was posted on Nairaland, a Nigerian discussion forum and news aggregation site, on 28 April 2018 – along with two other photos of the victim.

The photos are headlined: “Corpse Of A Young Lady Dumped On Orlu/Owerri Road, Imo (Disturbing Photos)”. The user posting them added: “A young lady was found dead along Orlu/Owerri road by Njaba bridge. It is unclear who killed the lady but it appears to be a murder case.”

The two other photos indicate that the woman’s body may have been lowered into a roadside culvert on a makeshift stretcher. Nairaland may not always be a credible news source, but the fact that the photo was posted in April 2018 means it can’t show a victim of a massacre in Orlu in February 2021.

The photo of the male victim may be more recent.

It appeared on Expressive Info, a Nigerian blog site, on 25 January 2021 with the headline: “Bodies litter Orlu after gun battle between army and ESN”.

On 25 January the BBC Pidgin website reported a clash between the Eastern Security Network and Nigerian soldiers, which led to injury and death.

Expressive Info may not be an established and credible news source. And there is no evidence of what the photo actually shows. But it appeared online more than three weeks before the tweet, so it too can’t show a victim of a Nigerian army massacre of Orlu residents on or around 18 February.

What happened on 18 February?

Phone footage posted on the AIT YouTube channel on 19 February does seem to show helicopters above Orlu, firing from the air as people below react with alarm.

Its anchor says: “The Nigerian army spokesperson of the 34 artillery Brigade, Obinze, Owerri, Imo state, Babatunde Zubairu, confirmed the operation and the deployment of helicopters and other military gadgets in a military operation carried out in Orlu town.”

The article reports the brigade’s spokesperson as confirming the “deployment of helicopters and other military gadgets” in “operations in search of the camps occupied by the personnel of Eastern Security Network linked with Indigenous People of Biafra” on 18 February.

But it adds that Zubairu said that Orlu “locals were not being harassed”.

Punch also reported that a person named Uda Orsuihiteukwa, identified as an “indigene of Uda Orsuihiteukwa in the Orlu Local Government Area”, had said that while no local person was shot, the operation caused “serious panic in the area”.

The two photos tweeted as evidence of a Nigerian army massacre of civilians in Orlu on or around 18 February 2021 were posted on the internet long before.