A civil war has been raging in Ethiopia for a year now, since prime minister Abiy Ahmed blamed the government of the northern region of Tigray for attacking a national army base there, in November 2020.

Ahmed recently vowed to lead the war effort personally from the front line, a move that brought support from renowned athletes Haile Gebrselassie and Feyisa Lilesa.

Amid the fighting, a claim was posted on Facebook that US soldiers had arrived in Djibouti, Ethiopia’s tiny northeastern neighbour, to protect US citizens.

“America has sent its special forces member to Djibouti to protect its citizens living in Ethiopia as the security situation has reached a critical level in Ethiopia,” it reads. The post, dated 23 November 2021, includes two photos of soldiers.

The first photo, also shared here, shows soldiers walking from a cargo plane on an airport apron. The second is of a line of similarly dressed soldiers, also on tarmac.

Do the photos show US soldiers deployed in Djibouti to protect citizens in Ethiopia, in November 2021? 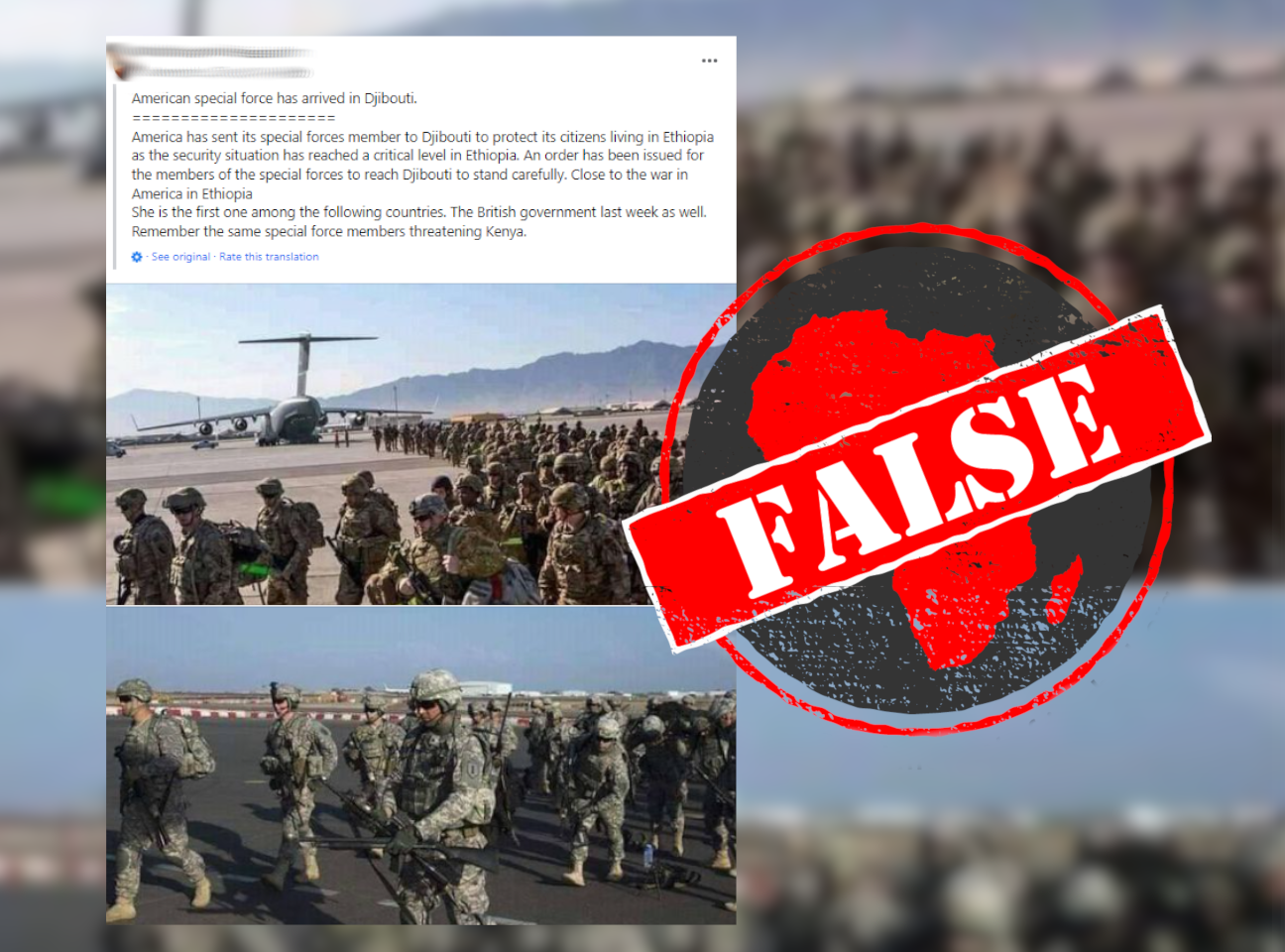 Bagram air base in Afghanistan

A reverse image search reveals that the first photo is of soldiers at Bagram air base in Afghanistan, a country in south-central Asia far from Ethiopia, and is more than eight years old.

It appears in a January 2020 article in the New York Times (paywall may apply), dated 2013. Its caption reads: “American soldiers from the 101st Airborne Division at Bagram Air Base in 2013.” The photographer is credited as Robert Nickelsberg of Getty Images.

We found the photo on the Getty Images website, with a similar caption. Its full date is given as 11 May 2013.

A reverse image search of the second photo shows that it was indeed taken in Djibouti, but in 2013. According to a US military Flickr account, the photo shows US soldiers of the East Africa Response Force boarding a plane on 18 December 2013. Exif data from the photo shows the location is Camp Lemonnier in Djibouti.

The soldiers were headed to Juba, the capital of South Sudan, to evacuate US diplomatic staff to Kenya and strengthen security at the US embassy in Juba. The evacuation took place after conflict broke out in South Sudan in 2013.

Foreign nationals’ kids born in South Africa can be denied citizenship, but foreigners may work in government