The graphic includes a photo of a man dressed in a clerical collar, seated in front of what looks like a religious painting.

An online search for the caption to the photo – “Catholic Priest Dies After Receiving Moderna's COVID Vaccine That Utilizes Aborted Fetal Tissue” – leads to an article with the same headline on the website consumerating.org.

The 14 January 2021 article gives more details, and in turn refers to other articles about the death of John Fields, a Catholic priest in the US city of Philadelphia.

But did Fields die because of receiving the Moderna vaccine and does the vaccine contain aborted foetal tissue? 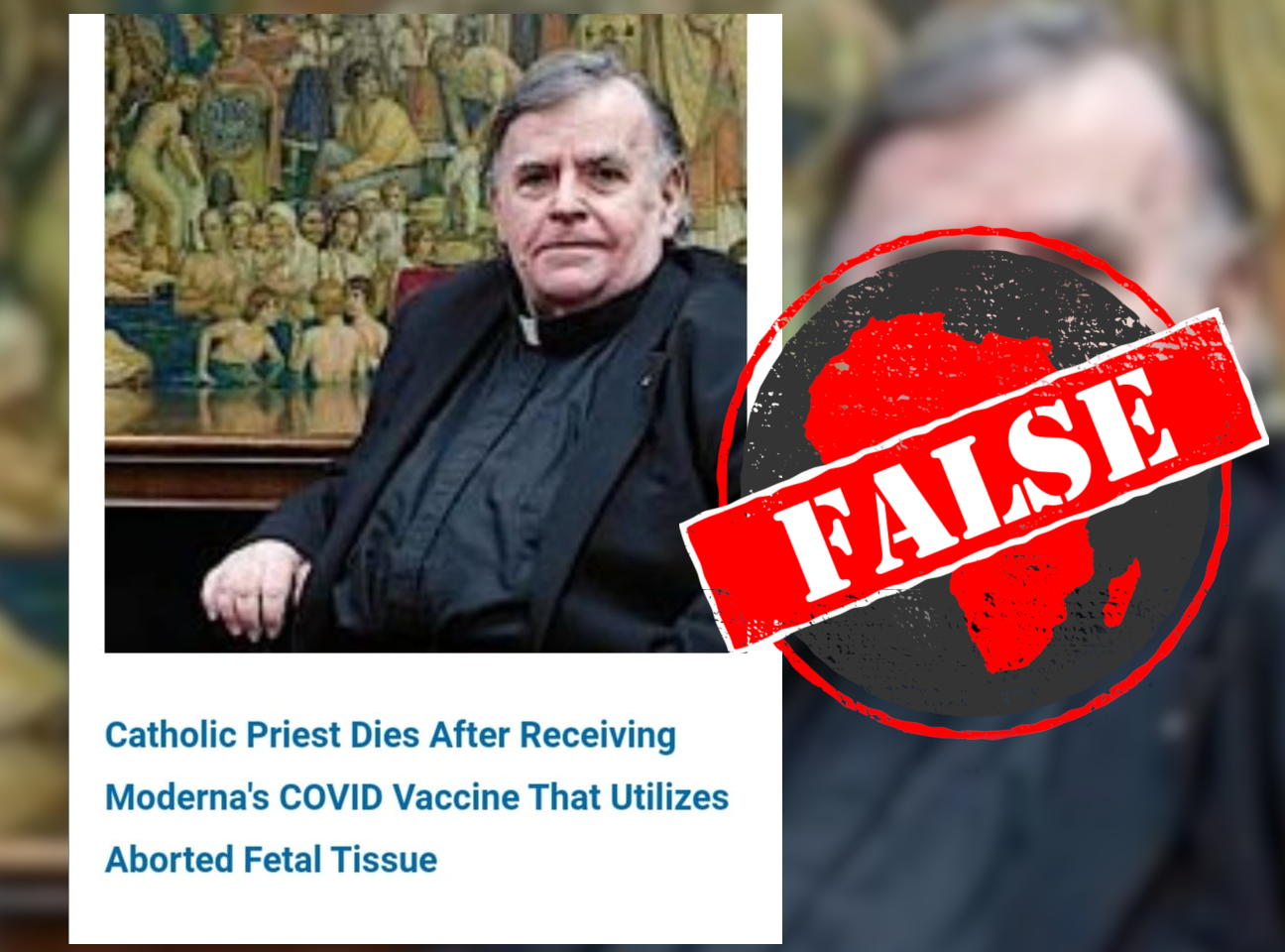 The website “The Consumer Rating and Research Centre”, which published the article with the same headline, lists an address in Kuala Lumpur, Malaysia. But it’s unclear whether the centre has any official status.

The “About Us” page on the website is confusing, with contradictory information and unconventional spelling and grammar. These are signs that the website may be untrustworthy.

A number of debunked, anti-vaxxer videos are posted on a page of the website titled “Vaccines Facts” under the headline “10 Shocking Videos”.

They include this untrustworthy video previously debunked by Africa Check.

This is an indication that the website consumerating.org promotes anti-vaccine propaganda.

The website’s bias is also evident in the article criticising the Catholic priest, Fields, for taking part in the Moderna vaccine trial. It also makes false claims about vaccines in general, including that “vaccines are the primary cause of auto-immune diseases in humans and domesticated animals”.

This is not true.

The article quotes something called “The Dialog”. While it doesn’t link directly to this source, a Google search reveals it is a news site based in Wilmington, Delaware, in the US, covering local Catholic news.

Fields was an “archpriest of the Ukrainian Catholic Archeparchy of Philadelphia” and communication director for the archeparchy, or diocese. Philadelphia, while in a different state, is about 50 kilometres from Wilmington.

The Dialog reported on Fields taking part in the Moderna vaccine trial, and on his death.

Before being approved for use by drug regulatory agents such as the US Food and Drug Administration (FDA) or the South African Health Products Regulatory Authority (Sahpra), vaccines go through three clinical trial stages.

Occasionally, in an emergency like the current Covid-19 pandemic, medicines or vaccines are approved for use through an emergency use authorisation, or EUA, despite them not yet having gone through a full three-stage clinical trial or been approved.

The Moderna vaccine against Covid-19 went through a three-stage trial in 2020. Participants were monitored for 28 days between the two doses of the vaccine and follow-up is continuing.

The study was double-blinded – neither participants nor those giving the vaccine knew whether they received an actual vaccine dose or a placebo.

While the safety analysis conducted by Moderna and the FDA found some adverse reactions to the vaccine, such as pain or swelling at the injection site, and headaches, no deaths directly related to the vaccine were reported. These side effects were signs of the immune system adapting to the vaccine.

According to The Dialog, Father Fields received the second dose of the vaccine on 1 October 2020. He reported having no side effects, and had a follow-up evaluation on 26 October.

It is important to remember that there is also no indication whether the 70-year-old priest received two live doses of the vaccine, or placebos.

He died on 29 November. There is no evidence his death was in any way linked to him having received the Moderna vaccine – and only a 50% chance he even received the vaccine at all, as is the case for any participant in a double-blind study.

Abortion and the vaccine

The original cells have multiplied into many new cells over the past forty-plus years. Moderna used a foetal cell line in the confirmation stage to make sure the vaccine worked. But there were no foetal cell lines used in the development and production phases of the vaccine. There is no foetal tissue in the actual vaccine injection.

In December 2020, the headquarters of the Catholic church, the Vatican, released a statement saying it was morally acceptable for Catholics to receive the Covid-19 vaccines.

The Vatican said that the need to prevent the spread of the disease outweighed the ethical problem posed by vaccines since “their connection with abortion is remote”.

The World Health Organization also advises the public to accept any of the approved vaccinations made available to them.