But accusations of vote rigging were reported in some counties. This forced the party, led by deputy president William Ruto, to announce that the nominations vote would be repeated in certain areas.

Amid the accusations, three photos went viral on social media with the claim that they were evidence of voting fraud.

The first photo is of a yellow car with its front smashed in after an accident. Yellow is one of the main colours of the UDA.

In the second photo, piles of documents are strewn across a tarred surface. The third photo shows boxes of more documents on the side of a road.

“An accident involving 2 UDA branded vehicles has exposed the rot in UDA nominations. One of the vehicles was found carrying UDA nominations ballot papers for Nyeri, Laikipia and Nyandarua counties.”

It adds: “UDA has printed excess ballot papers which they are giving their preferred candidates to mark a day ahead of their nominations.”

But do the photos really show a UDA car carrying nomination ballots, caught out after an accident in Kenya’s Nyeri county? We checked. 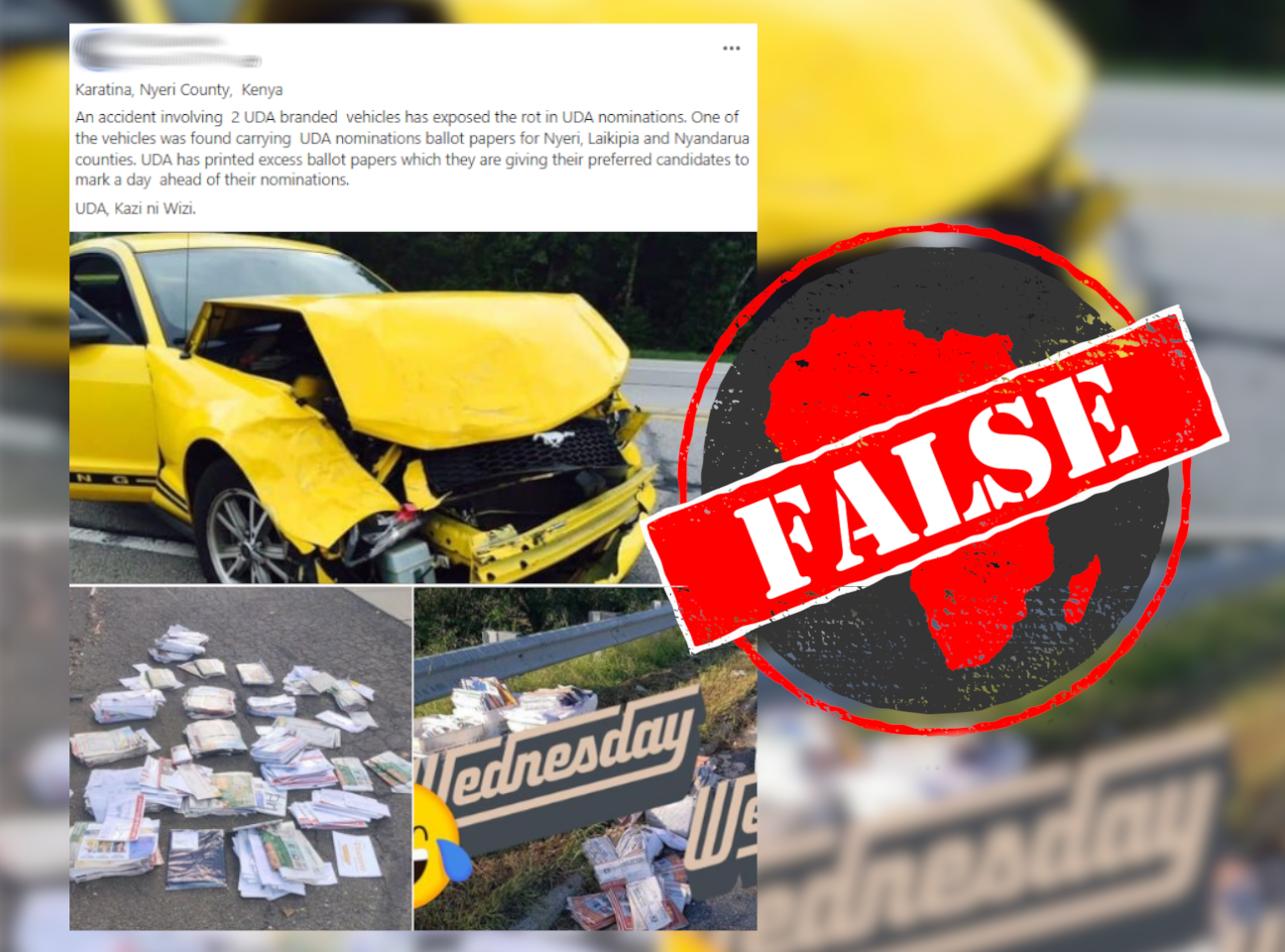 A clue that the caption is false is that in the first photo, the car doesn’t have a number plate. This would be unusual in Kenya.

A reverse image search of the photo led us to the website of Crosley Law, a US law firm. Here it appears in a video discussing a car accident case. The video can also be seen on YouTube, where it was uploaded in November 2017. The photo of the smashed car appears at the 37-second mark.

A reverse image search of the second photo reveals that it’s taken from an October 2020 article on the CNN website, headlined: “DOJ charges mail carrier for dumping mail and ballots in New Jersey dumpsters.”

New Jersey is a state in the US. The photo’s caption reads: “Mail, which included ballots, found dumped in a North Arlington, New Jersey dumpster.”

And a reverse image search of the third photo led us to an article published on the NJ Advance Media website in October 2018.

The photo is described as showing bins of mail dumped by a US postal service worker along a street in Pennsauken township, also in the US state of New Jersey.

All three photos were snapped in the US, years ago. None is related to Kenya or the UDA nominations vote.