A quick-response or QR code is a type of two-dimensional barcode.  You can scan the code with your cellphone to get more information about a product or download mobile applications. But, according to a graphic shared on Facebook, QR codes are also being used on graves in Japan.

Text in the graphic reads: “There are graves in Japan equipped with a QR code for each grave, which shows you pictures, information and a brief biography of the life of the dead.”

It shows a photo of three headstones and someone who appears to be scanning the QR code on one of them with a cellphone.

We suspected that the writing on the headstones was in Chinese, not Japanese, script. And Facebook’s fact-checking system has flagged the graphic as possibly false. So we investigated. 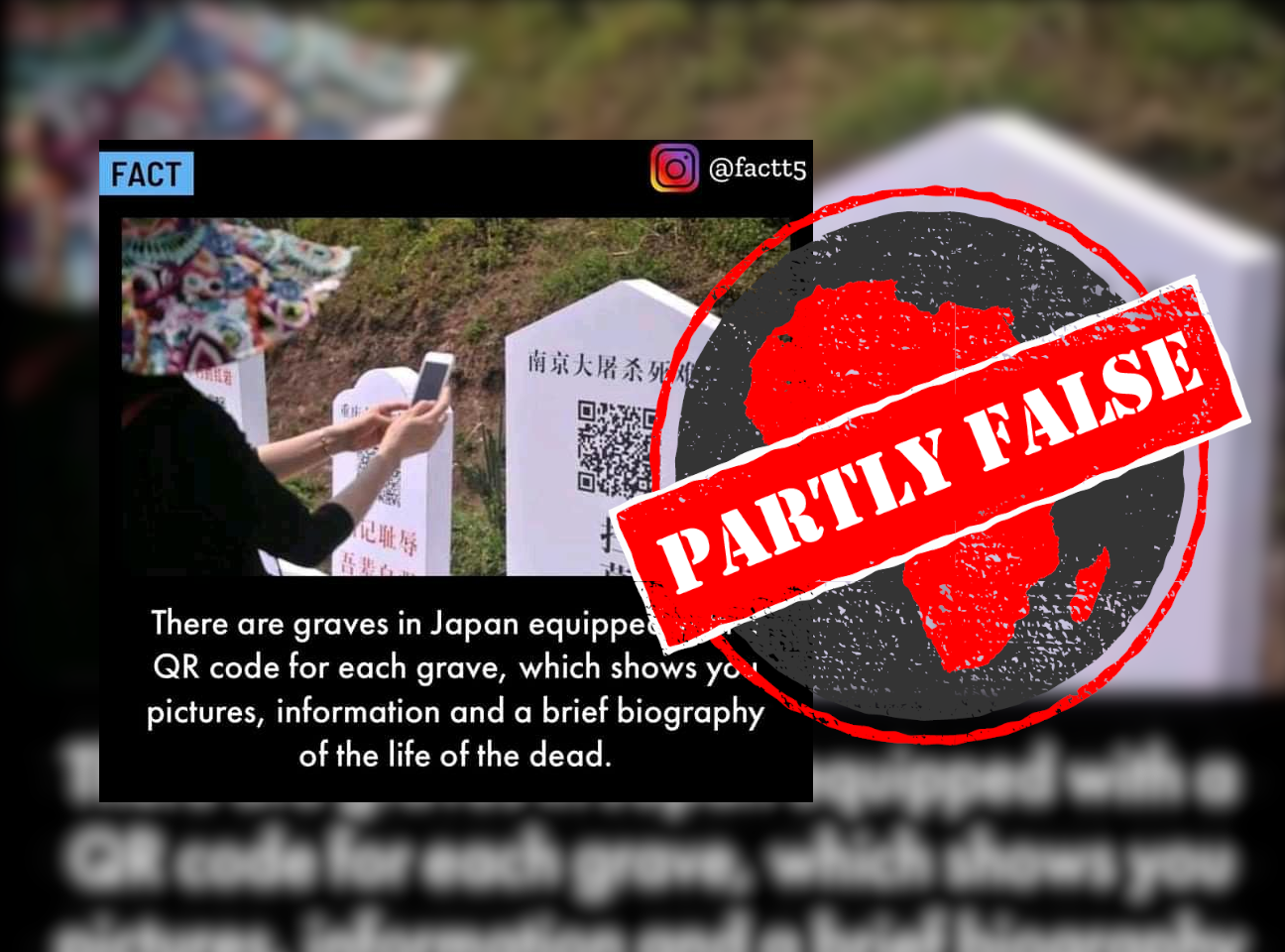 Graves in photo have ‘QR code to commemorate massacre victims’

A reverse image search of the photo in the graphic led us to the same photo published on a Chinese state-run website in 2015.

It was captioned “A visitor scans the QR code on the fake memorial gravestone for victims of the Nanjing Massacre on March 31, 2015” and was one of three photos in an article with the headline “Scanning QR code to commemorate massacre victims”.

According to the article the QR codes were attached to fake memorial gravestones for victims of the Nanjing massacre and the bombing of Chongqing following Japan’s invasion of China in 1937.

The article said that scanning the QR codes on the fake gravestones allowed visitors to “pay their respects to the victims” and “access an online platform, providing services including presenting flowers, lighting candles and offering incense”.

The same graphic has also been fact-checked by other organisations, who also found the image doesn’t show an actual grave in Japan, but is part of a commemoration in China to Chinese killed by Japanese forces during the second world war.

QR codes on headstones in Japan since 2008

However, according to an article by Pacific Standard, a US magazine, “QR codes premiered in the Japanese market in 1994 and found their way onto tombstones in 2008”.

The QR codes on these real graves lead to a website with photos and information about the deceased and “allow for users to give virtual gifts, like food, incense, or a Buddhist funeral chant”.

The article drew on the work of academic Candi Cann, whose “research focuses on death and dying, and the impact of remembering (and forgetting) in shaping how lives are recalled, remembered, and celebrated”.

Cann wrote that “the coding expands the traditional limitations of physical space, meaning if family members are unable to travel to the grave site, they can access the same virtual page through the Internet. While, traditionally, Japanese families keep a small altar honoring their dead for a year, the virtual altar shifts ‘the physical necessity of a household altar to the virtual realm’”.

Reuters, reporting on the same trend in 2008, suggested that the QR code “offers connectivity” to the deceased long after they have died.