What is “the Truth About the TEST”?

“The COVID-19 Test is called an RT PCR test which stands for reverse transcription polymerase chain reaction,” claims a message posted on Facebook in South Africa on 10 September 2020.

“The test does NOT...I repeat...does NOT test for a virus.” Instead, it “amplifies” genetic material – “makes it larger” – and so can give anyone a positive result for coronavirus infection.

The post makes a number of other dodgy claims, refers to already debunked conspiracy theories, and even asserts that “Viruses and Diseases do not exist”.

It also says Kary Mullis, the “inventor of this test” who “died last year at the age of 74”, was “adamantly opposed to his test being used for Covid-19 right up to the point of his death”.

How are people tested for Covid-19, the disease caused by the new coronavirus? Are these tests accurate? And did “the inventor” of “the test” oppose its use in detecting Covid-19? 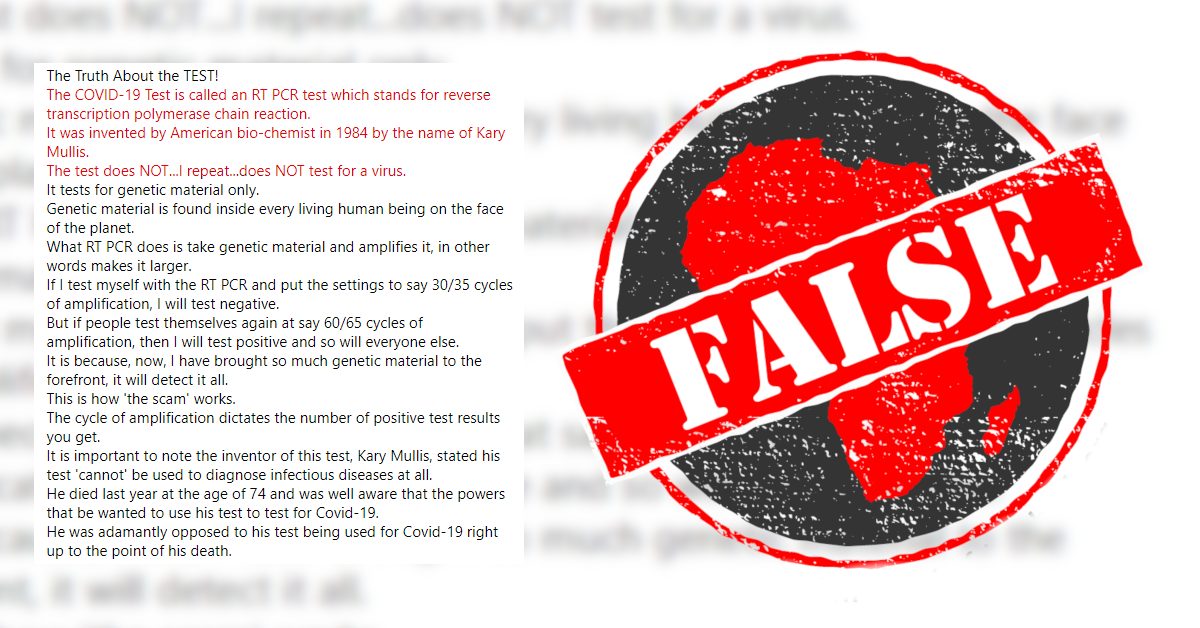 The ABCs of RT-PCR, DNA and RNA

Many different tests are used to detect Sars-Cov-2, the virus that causes Covid-19. One is indeed the commonly used RT-PCR test, which involves the techniques of reverse transcription (RT) and polymerase chain reaction (PCR).

Polymerase chain reaction is a method of quickly and cheaply duplicating a piece of genetic information so there is a large enough quantity for the test. The development of this method won Kary Mullis a Nobel prize.

And reverse transcriptase, as the US Centers for Disease Control explains, uses an enzyme to convert RNA – the form in which the genetic material of Sars-Cov-2 is stored – into DNA, which the PCR process can then multiply.

The Sars-Cov-2 virus has a unique genetic sequence that was first decoded and published in February 2020. If this genetic sequence is detected in a sample from a patient, the patient has been infected with the virus.

The Facebook post claims that “the inventor of this test, Kary Mullis, stated his test ‘cannot’ be used to diagnose infectious diseases at all”. But Mullis did not invent the RT-PCR test. He developed the PCR method, which has many uses.

Mullis was controversial for supporting widely disproven notions such as that Aids is not caused by HIV and global warming is a hoax. But there is no evidence that he said anything attributed to him in the Facebook post. He also did not say on his website that PCR could not be used in the diagnosis of infectious diseases.

And Mullis could not have been “adamantly opposed to his test being used for Covid-19”, not only because it wasn’t “his” test. Mullis died in August 2019. The new coronavirus was first identified in late December 2019 – four months later.

Amplify until you get a result? No, virus has to be present

A document produced by the CDC explains, in technical jargon, how the RT-PCR test works. A specimen such as a nasal swab undergoes several chemical processes.

First, reverse transcriptase converts the RNA of the virus into DNA. The DNA is then duplicated using polymerase chain reaction. Finally, a special dye will break down and emit light in the presence of the genetic information unique to Sars-Cov-2.

PCR makes enough copies of the genetic material so that this glow will be noticeable. The intensity of this light is measured after each cycle of the PCR process, until a threshold is reached.

The post claims that the “cycle of amplification dictates the number of positive test results you get”, but this is not the case. If the virus were never present in the original sample, its RNA could not be converted into DNA, duplicated through PCR, or detected by the dye.

As the New York Times explains, there is a suggestion that test results should include the number of PCR cycles that were required to produce a certain intensity of glowing light. This may give doctors an estimate of how infectious a person with the virus may be.

A lower number of cycles would indicate that the virus is present in large quantities, and that a person is highly infectious. But no number of repeated PCR cycles could produce the genetic material of the virus if it was not present in the sample. – Keegan Leech