Satire taken out of context: Elon Musk has not demanded Donald Trump’s return to Twitter

Note: After this report was published, Musk said at a Financial Times event: "I would reverse the permanent ban [on Trump] but I don't own Twitter yet so this is not a thing that will definitely happen." The claim that he demanded “Trump’s reinstatement on Twitter” in a letter to Twitter’s board remains incorrect. And the claim was rated only as satire.

A number of tweets and Facebook posts, some shared 100,000s of times, have claimed that world’s richest man Elon Musk has demanded “Trump's reinstatement to twitter” in a letter to its board.

Donald Trump, former US president, was permanently suspended from Twitter in January 2020. The site found that he had breached its terms of service by posting tweets which it deemed “highly likely to encourage and inspire people to replicate the criminal acts that took place at the US Capitol on January 6, 2021”.

This was in reference to an attack on the US Capitol building by a large group of Trump’s supporters.

But what has the South African-born multi-billionaire said about his plans for Twitter, and has he demanded that Trump be allowed back on the platform? 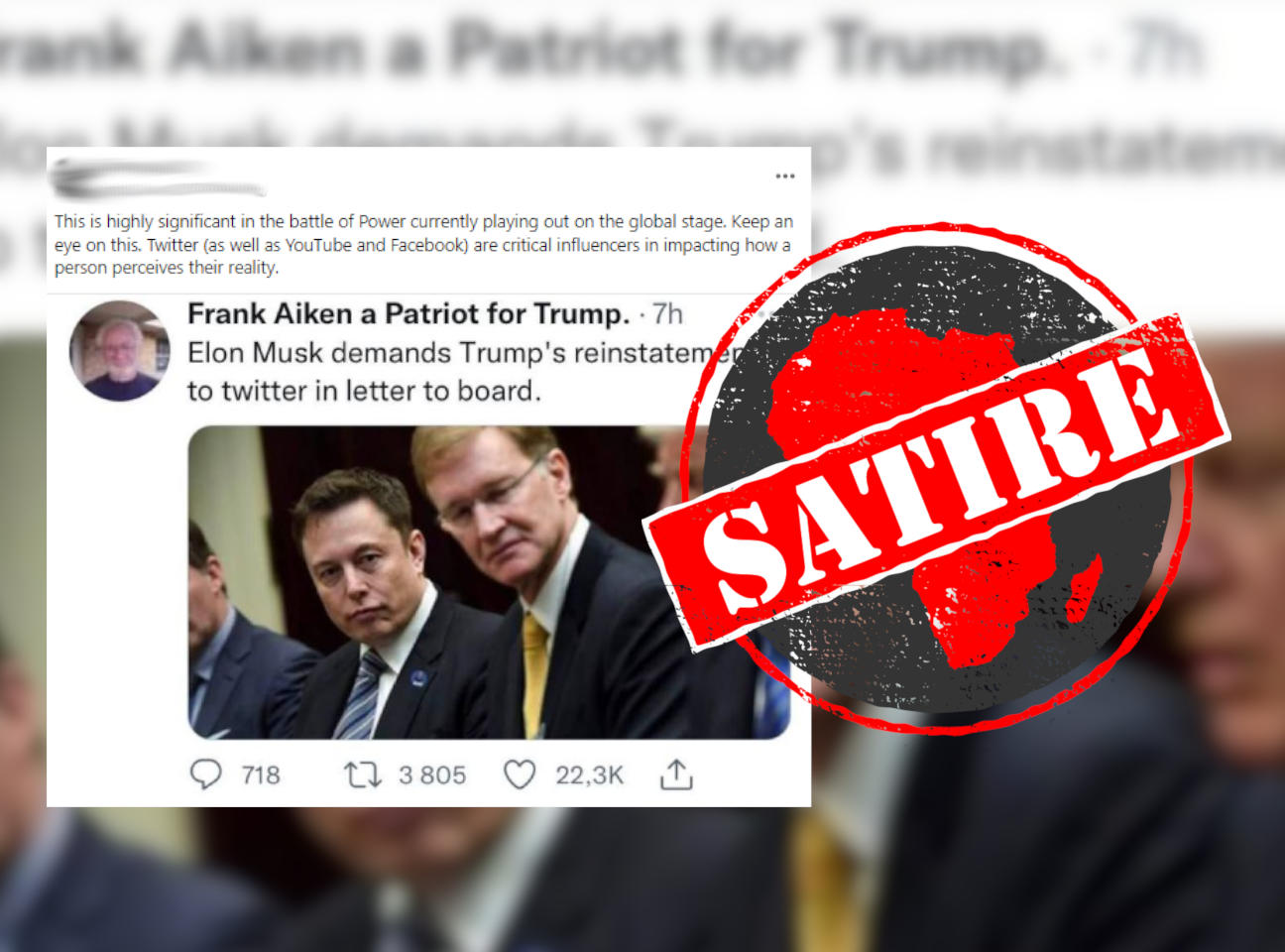 Headline from a satire site

Many of the social media posts show the same image and identical wording, making it easy to trace them back to a single source, the satire site Tater Report.

The site published an article titled “Elon Musk Demands Trump’s Reinstatement to Twitter In Saturday Morning Letter to the Board”. The site doesn’t date its articles, but by looking at the page’s source code, it appears to have been published on 23 April 2022.

The image is of Musk and fellow US business executive Wendell Weeks looking on as Trump speaks. The original photo was taken in January 2017 by Washington Post photographer Matt McClain.

Tater Report has slightly edited the image by cropping it and adding a small button which reads “ALLOD” to Musk’s lapel.

ALLOD stands for “America’s Last Line of Defence”, a network of satire and parody news sites all run by one person, Christopher Blair. Blair has been sharing satirical news stories since 2014, often under the nickname “Busta Troll”.

The same (edited) image appears in many of the Twitter and Facebook posts which have shared the claim. This indicates that Tater Report is the original source.

Tater Report clearly labels itself as a satire site. Its about page reads: “Everything on this website is fiction. It is not a lie and it is not fake news because it is not real.” The article on Musk is also labelled “Musky Satire”.

However, the image and headline are being posted widely on social media without linking back to Tater Report, or any disclaimer that the claim is false.

What are Musk’s plans for Trump?

Musk has not made a public call for Trump to be allowed to return to Twitter. And while the billionaire has not officially announced his  planned changes to the platform, he has shared several of his intentions on Twitter, fittingly.

Musk has tweeted that he intends to “make Twitter maximum fun”, rely on subscriptions rather than advertising to generate income, encrypt direct messages on the platform, make the platform “politically neutral”, “defeat” spam bots and authenticate real humans.

He has also championed “free speech”, which he later clarified: “By ‘free speech’, I simply mean that which matches the law. I am against censorship that goes far beyond the law.”

Musk has said that Truth Social, a Twitter alternative created in response to Trump’s ban from Twitter, “exists because Twitter censored free speech”. He also seemed to disapprove of Twitter’s decision to ban Trump in January 2021.

On 6 May he tweeted that he had had no communication with Trump in response to reports that the former president had encouraged him to buy Twitter.

Twitter as a company has also been tight-lipped on whether there are any changes planned under Musk’s ownership.

In an April 2022 investor filing the company told investors: “Until the transaction closes, it is business as usual for us, including with respect to our products.”

It only noted: “When there are changes, we will be sure to communicate as we always have."