In late May 2022, a claim went viral on social media in South Africa, saying a South African scientist had achieved “a huge medical breakthrough”.

The posts include a photo of a woman posing in a formal gown and high heels and a photo of someone in protective gear appearing to look through a microscope in a laboratory. They say the woman is called “Lebo Moatshe” and has “successfully removed HIV from a sperm cell in a lab”.

The claim implies this is the first time the procedure has been performed successfully.

One 28 May post was published to a public Facebook group with over 274,000 followers and viewed more than half a million times in just over a week.

The story was also featured on the Opera News website, though the article included a link to a 2015 scientific paper about the procedure and a disclaimer: “She didn’t say this is the first time that what she did, was done (breakthrough). Instead, it was her first time … Let us celebrate her individual achievement.”

Opera News also linked back to a tweet, retweeted and quoted many times over, and screenshot to Facebook. 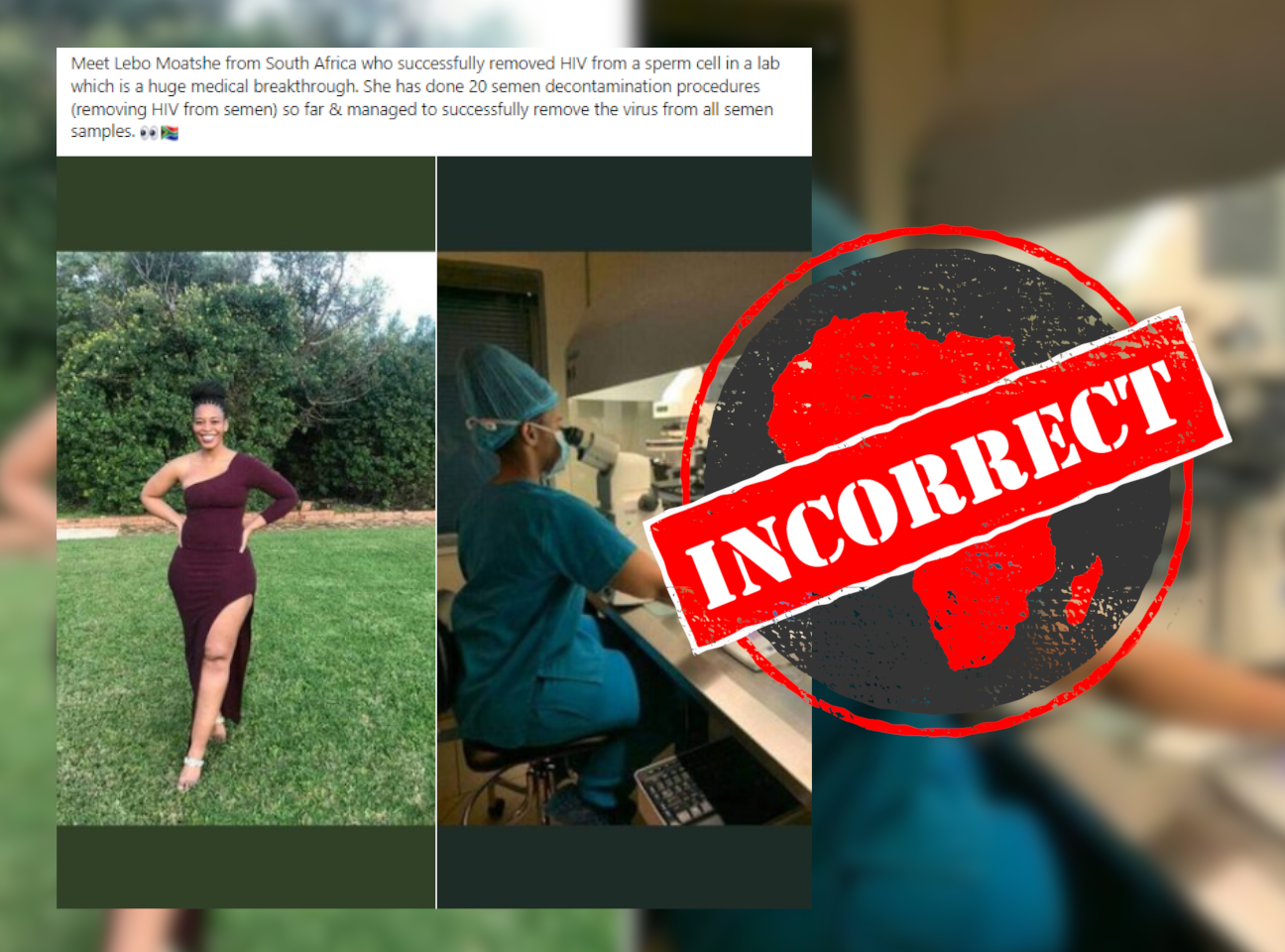 We didn’t have to look very far to find Moatshe herself debunking the claim, saying the procedure was not a medical breakthrough.

She replied to a 28 May tweet: “I must clarify that I’m not the first person to do this procedure. It has been done by many over a period of years. It is a common thing in reproductive biology.”

She continued: “I have just acquired my skill recently as an intern hence my post.”

On 26 May, Moatshe had tweeted: “I’ve done 20 semen decontamination procedures (removing HIV from semen) so far and I managed to successfully remove the virus from all semen samples.”

This post was widely liked and retweeted, and she followed up the next day with a thread of tweets giving more details about her work. On 27 May she said: “Also, I’m just an embryologist, I can only make babies. I can’t find cures for viruses.”

She defined what an embryologist did in a tweet from July 2021, pinned to the top of her account: “An embryologist is [a] fertility specialist that helps create viable embryos by processing and selecting good sperm and oocytes to be used in IVF resulting in a successful pregnancy.”

The human immunodeficiency virus, or HIV, attacks the immune system, making the body vulnerable to other infections. If left untreated, it can progress to acquired immunodeficiency syndrome, or Aids.

HIV is transmitted via bodily fluids, including during sex. It can be transferred from mother to child during pregnancy, childbirth and breastfeeding, though this can be prevented through the use of antiretroviral HIV drugs.

HIV is found in the semen, but not the actual sperm cells, of HIV-positive men. If an HIV-positive man and a HIV-negative woman want to conceive, there is a risk of transmitting HIV to the woman or to the potential infant.

The practice of removing HIV from semen, as Moatshe said, dates back decades. Researchers in Italy were already using the technique in the late 1980s on couples trying to conceive safely through in vitro fertilisation (IVF).

And in the decades since, semen washing, also called semen decontamination, has become much more common.

Semen washing aims to reduce the amount of the virus in the semen, to the point where it is not detectable. The sperm cells can then be used in IVF and the risk of transmitting HIV to partner or baby is substantially lowered.

Despite the high rates of HIV in South Africa, very little research has been conducted on semen decontamination in the country, and it remains expensive and not accessible to many people. But it has been available as a treatment for decades.

FACTSHEET: The leading causes of death in Africa in 2019

The latest data from the World Health Organization is likely to be the last major update not to feature Covid-19 statistics.