The court found him guilty for defying its order to appear at a commission of inquiry into corruption during his presidency, which ran from 2009 to early 2018. The commission is headed by deputy chief justice Raymond Zondo.

The judgement was delivered by Sisi Khampepe, acting chief justice of the Constitutional Court. She said Zuma had made “provocative, unmeritorious and vituperative statements that constituted a calculated effort to impugn the integrity of the judiciary”.

The day after the sentence, four screenshots of what seem to be tweets by Tokyo Sexwale – a prominent businessman, politician and, like Zuma, member of South Africa’s ruling African National Congress – were posted on Facebook.

The tweets are from a Twitter account named Tokyo Sexwale, with the handle @TokyoSexwaleSA. Dated 29 June, they all express strong support for Zuma.

“Jacob Zuma is not going to jail. Khampepe was just reading a useless piece of paper,” the first reads.

The second: “For as long as De Klerk  never went to prison for murdering black people during apartheid, Zuma is not going anywhere.” FW de Klerk was the last president of the apartheid regime, in power from 1989 until South Africa’s first democratic elections in 1994.

The third tweet reads: “Those who are waiting to see Zuma in jail in the next 5 days, you are going to count until you run out of fingers.”

And the fourth: “White heads of state never went to prison for enslaving and slaughtering blacks. Colonisers are walking free. FACT: Zuma is not going to jail!”

During his political career, Sexwale was premier of Gauteng province and, later, minister of human settlements. He has also made a bid for the presidency. But did he really tweet this support for Zuma and, by extension, his own contempt for the Constitutional Court? 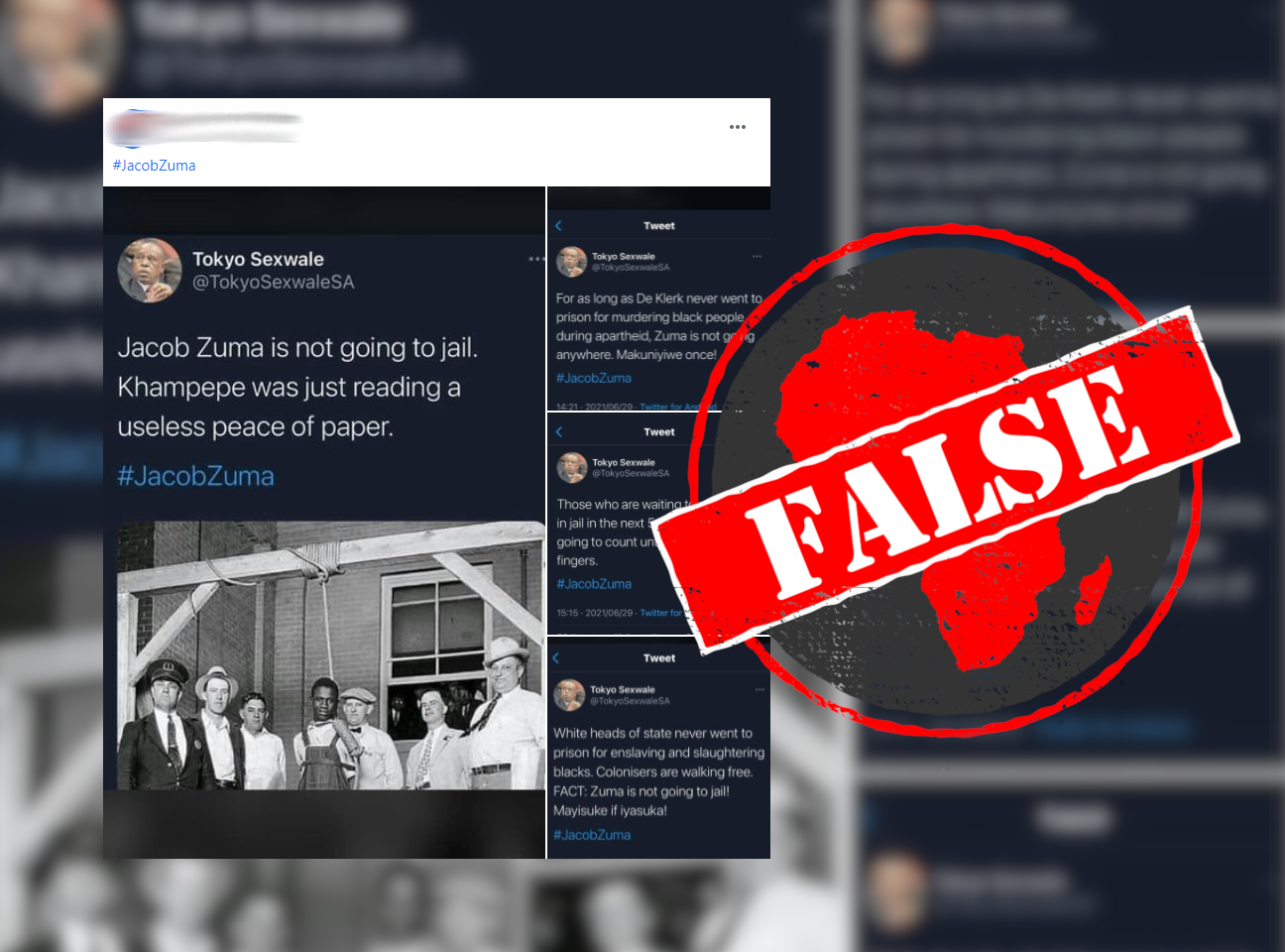 ‘Views not associated with Sexwale’

The screenshots do not have Twitter’s blue verification tick, which shows that an account with the name of a famous person actually belongs to that person.

Sexwale doesn’t seem to have a verified Twitter account. There is an account with the handle @SexwaleTokyo, active while he was human settlements minister, but it was last updated in 2011.

We found the @TokyoSexwale account on Twitter – suspended for violating the Twitter rules. But its description has been cached by Google: “This is a parody account. The views expressed herein are not associated with Tokyo Sexwale or his companies.”

The account was not run by Sexwale, and the tweets are not by him.

We also ran the tweets through several Google text and image searches, and found no evidence they quoted something Sexwale had said. If he had, it would have made national news. It hasn’t.