Shapeshifting alien stopped Likoni channel recovery in Kenya? No, photo of US shipwreck in Pacific Ocean

Published on 14 October 2019
A woman and her child drowned on 29 September 2019 when their car slid off a ferry crossing the Likoni channel in Mombasa, Kenya, and plunged into the ocean.

Efforts to retrieve their bodies were hampered by the depth of the water and zero visibility. They were finally recovered on 11 October, 13 days after the accident.

The long delay led to speculation and misinformation on social media.

With the header “LIKONI EXCLUSIVE - What divers found,” one Facebook user shared a photo of a scuba diver underwater next to an object that could resemble a massive fish.

“There is a very huge shapeshifting alien creature with a fishy face trying to block our way hence hindering our efforts to cover a wide area down there,” the post reads.

“This creature has a very dark face and whenever it appears, the whole area becomes nearly invisible that even the most powerful lights cannot withstand the darkness.” 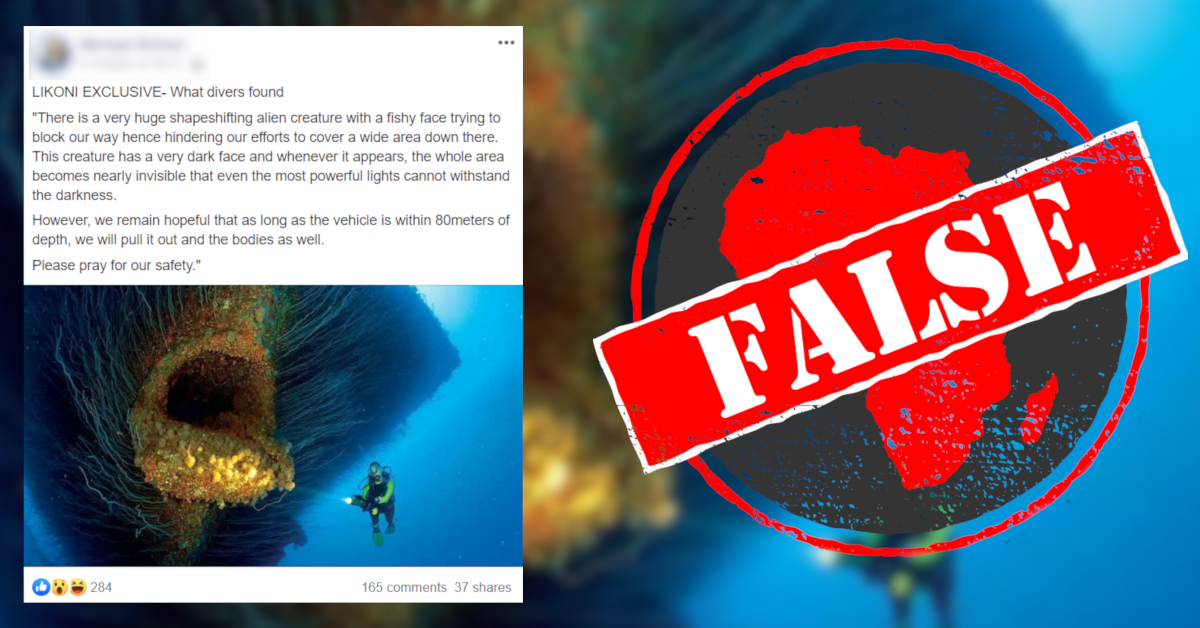 Using a reverse image search, we found the photo on the stock image collections of Age Fotostock, Alamy and Getty Images.

The photo was taken on 12 May 2008 by wildlife photographer Reinhard Dirscherl.

It shows a diver at the wreck of aircraft carrier USS Saratoga, which sunk in mid-1946 during an atomic bomb test.

The shipwreck is a popular scuba-diving destination.

The photo does not show an underwater “alien creature” and the photo was not taken during recovery efforts at Likoni. – Dancan Bwire