Monkeypox has been grabbing headlines in May 2022. Cases of the disease, similar to but less severe than smallpox, have been reported in the US, UK, Australia and elsewhere, including western and central Africa where it is considered endemic.

With the world slowly recovering from the Covid pandemic, news about monkeypox has sometimes been sensational.

UNAids, the United Nations’ effort to tackle HIV and Aids, has warned that “some public reporting and commentary on monkeypox has used language and imagery, particularly portrayals of LGBTI and African people, that reinforce homophobic and racist stereotypes and exacerbate stigma”.

Africa Check has already had to debunk a claim that there has been a monkeypox “outbreak” in Nigeria. There were cases of the disease, but no official outbreak.

And as news of monkeypox spreads, conspiracy theorists haven’t been far behind. 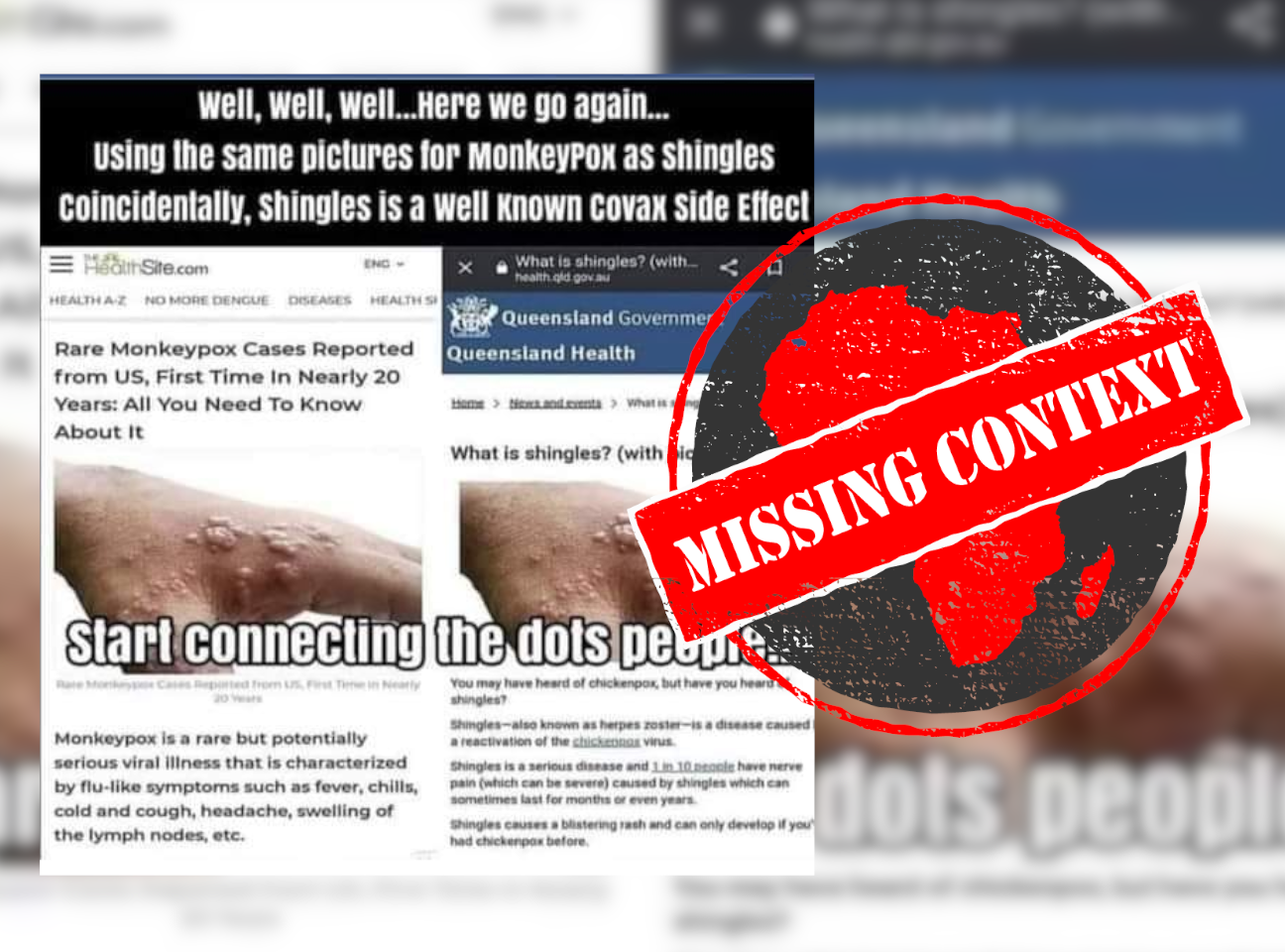 A graphic circulating on Facebook and WhatsApp in South Africa includes screenshots of two health articles. One discusses monkeypox, the other shingles – a condition related to chickenpox. But both use the same photo, of a hand with raised pustules on the skin.

Comments on the graphic include:

The first screenshot is of an article on The Health Site.com, a website based in India. The article was posted on 20 May, with the headline “Rare Monkeypox Cases Reported from US, First Time In Nearly 20 Years: All You Need To Know About It.”

The second screenshot shows a disease advisory on the website of Queensland Health, the health department of Australia’s Queensland state. It’s headlined: “What is shingles? (with pictures)”.

But does the fact that the same photo was used in two different articles, from different websites in different countries discussing different diseases, indicate a conspiracy requiring people to “connect the dots”?

A TinEye reverse image search reveals that the photo is described as showing the hand of a person with shingles. It’s available on two stock photo sites – Shutterstock and 123RF – with the same caption: “Skin infected Herpes zoster virus on the arms.”

Herpes zoster is another name for shingles. It’s a painful condition with rashes and blisters on the skin. It occurs when varicella-zoster, the virus that causes chickenpox, becomes active again in the body. It only happens to people who have had chickenpox before. The virus lies dormant, but may then reactivate later in the person’s life.

Chickenpox doesn’t come from chickens. The disease is old, defined in the 16th century as being “so called ‘from its being of no very great danger’.”

And monkeypox can’t only be associated with monkeys. The virus that causes the disease is said to be “zoonotic” – it can pass from nonhuman animals to people. But the name simply comes from it being first detected in a group of monkeys kept in a research laboratory in Denmark, in 1958. One microbiologist writes that it might be transmitted by rodents.

Monkeypox is a “cousin of smallpox”, a serious disease finally eradicated by vaccination in the 1970s.

Today, the article on The Health Site.com shows a different photo – of monkeypox blisters on a person’s hand. The same photo is used in a World Health Organization explanation of monkeypox.

But the WayBack Machine, an Internet Archive project, reveals that when the article was first published on 20 May it used the stock photo said to show shingles. This is the photo Queensland Health uses in its advisory on shingles.

An image editor on a health website made a mistake. The mistake was then corrected.

But the graphic also makes a more serious claim: that shingles is a side-effect of Covax, a World Health Organization initiative to make Covid vaccines available to as many people as possible. Africa Check discusses this claim here.