‘Silver fillings cause serious health problems’? No evidence of harm for most people

IN SHORT: Although the FDA warns that high-risk groups may be more susceptible to the effects of dental amalgam, the agency did not "admit" that silver fillings "cause kidney, brain, urological, fertility, neurological and renal problems".

A graphic viewed over 1,400 times in just 24 hours on Instagram shows a tooth with a silver filling.

Text at the top of the graphic reads: “The FDA admits: silver fillings cause kidney, brain, urological, fertility, neurological and renal problems.” The US Food and Drug Administration, or FDA, is a US federal agency promoting public health.

Fillings are used by dentists to fill cavities caused by tooth decay, or to repair broken teeth and teeth that have been worn down.

The most common type of filling, according to the UK’s National Health Service (NHS), is called dental amalgam, made from a mixture of metals such as silver, mercury and copper. Other types of fillings include gold and porcelain.

The graphic has also found its way onto Facebook, with the same illustration and words. Some users posted a graphic with a different photo but the same claim.

The NHS warns against “a number of articles on the internet about the alleged toxic properties of amalgam” and says “there is no evidence that exposure to mercury from amalgam fillings has any harmful effects on health”.

But has the FDA “admitted” otherwise and what is the truth behind silver fillings? We reached out to the FDA. 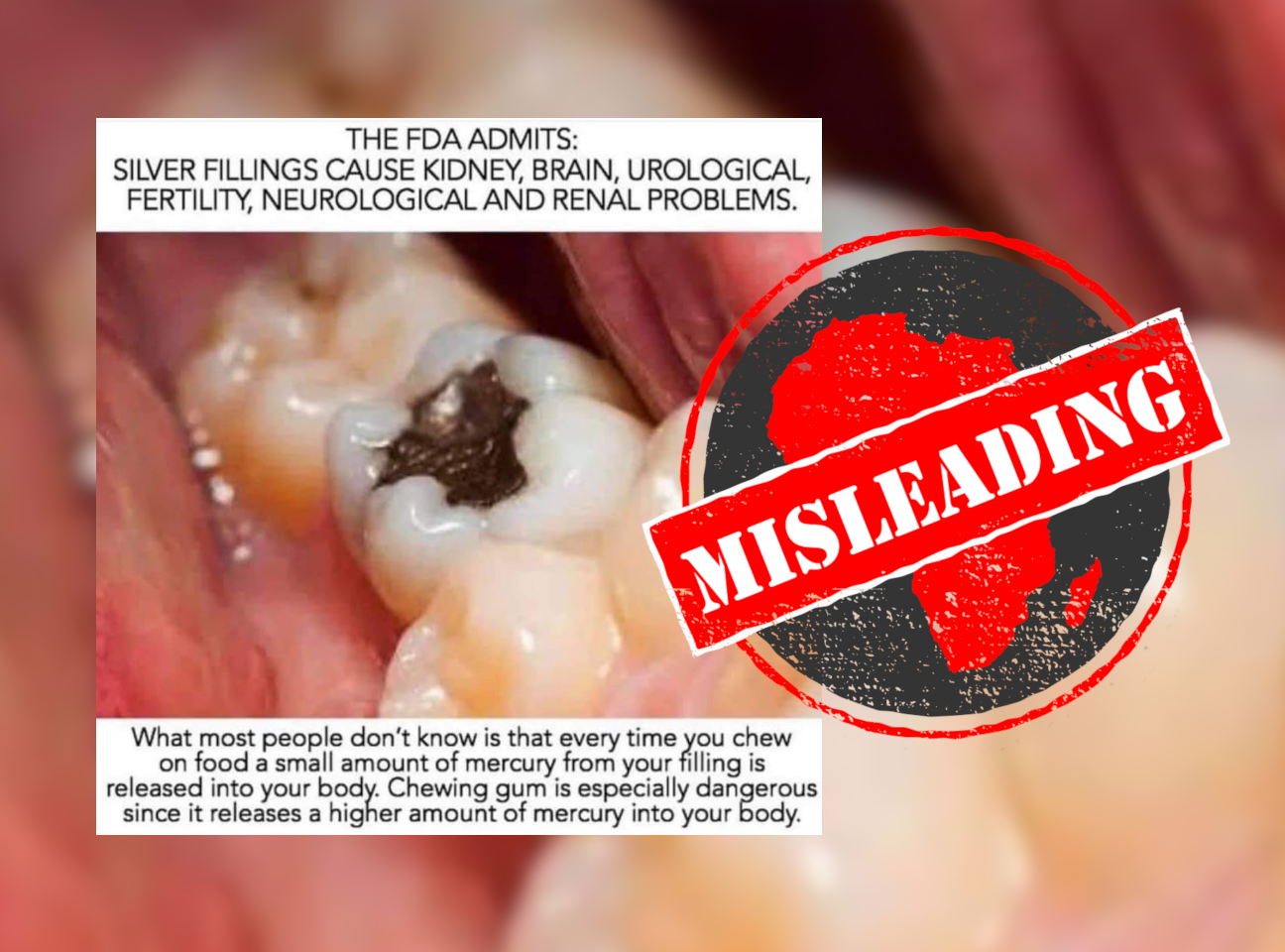 The amount of vapour released depended on the number and age of the filling, Nelson said, as well as the habits of each person, such as teeth grinding and gum chewing.

Nelson said that there was no conclusive evidence to show that dental amalgam causes harmful health effects in the general population.

She did warn that certain groups, including pregnant women, nursing mothers and children under the age of six, “may be more susceptible to the effects of exposure to mercury from dental amalgam and may be at greater risk for adverse health effects”.

This list included “people with a known allergy to mercury and people with neurological impairment or kidney dysfunction”, Nelson said.

But what remains uncertain is the potential for the mercury in dental amalgam to turn into other mercury compounds within the body and whether the collection of mercury in certain body fluids and tissues could “result in other unintended health outcomes,” Nelson explained.

The FDA recommends that people who might be at a higher risk for possible adverse health effects should rather use other dental alternatives, such as resins or glass ionomer fillings.

Nelson told Africa Check that the FDA continued to believe that the “benefits of materials in FDA-approved or cleared implantable and insertable medical devices [such as fillings in teeth] outweigh their risks for most patients”.

She referred us to a 2020 report where the FDA found that there had been no increased risk in adverse effects for the general population using dental amalgam.

Nelson recommended that people who experienced any reactions from treatment with amalgam should seek medical care from their dentist or doctor.

“We have published information for the public and recommendations for patients and health care providers, which are informed by our discussions with health care professionals,” she said.

Although the FDA warns that high-risk groups may be more susceptible to the effects of dental amalgam, the agency did not "admit" that silver fillings "cause kidney, brain, urological, fertility, neurological and renal problems". The graphic is misleading.

No, rubbing orange peel on teeth could harm them – see a dentist instead