“Statistics showed that crime levels were declining year after year under @PresJGZuma, now they are getting higher.”

That’s the claim in a tweet posted on 20 August 2021, on the same day South African police minister Bheki Cele released the first quarter crime statistics for 2021/22.

The first quarter covers April to June. Compared to the same period in 2020, the 2021 figures do show a double-digit increase in most crime categories.

Cele said this was because during this period in 2020, South Africa was in “hard lockdown”, the alert-level system used to regulate the country’s response to the Covid-19 pandemic.

Former South African president Jacob Zuma was in office from 9 May 2009 until his resignation on 14 February 2018. The next day, current president, Cyril Ramaphosa, was sworn into office.

But Zuma still has a public following. This was witnessed when his arrest triggered widespread riots in the provinces of KwaZulu-Natal and Gauteng, after the former president was jailed on 8 July for contempt of court.

Someone replied to the tweet, tagging Africa Check. We checked to see if the original tweet was correct in saying that crime declined year after year during Zuma’s term. 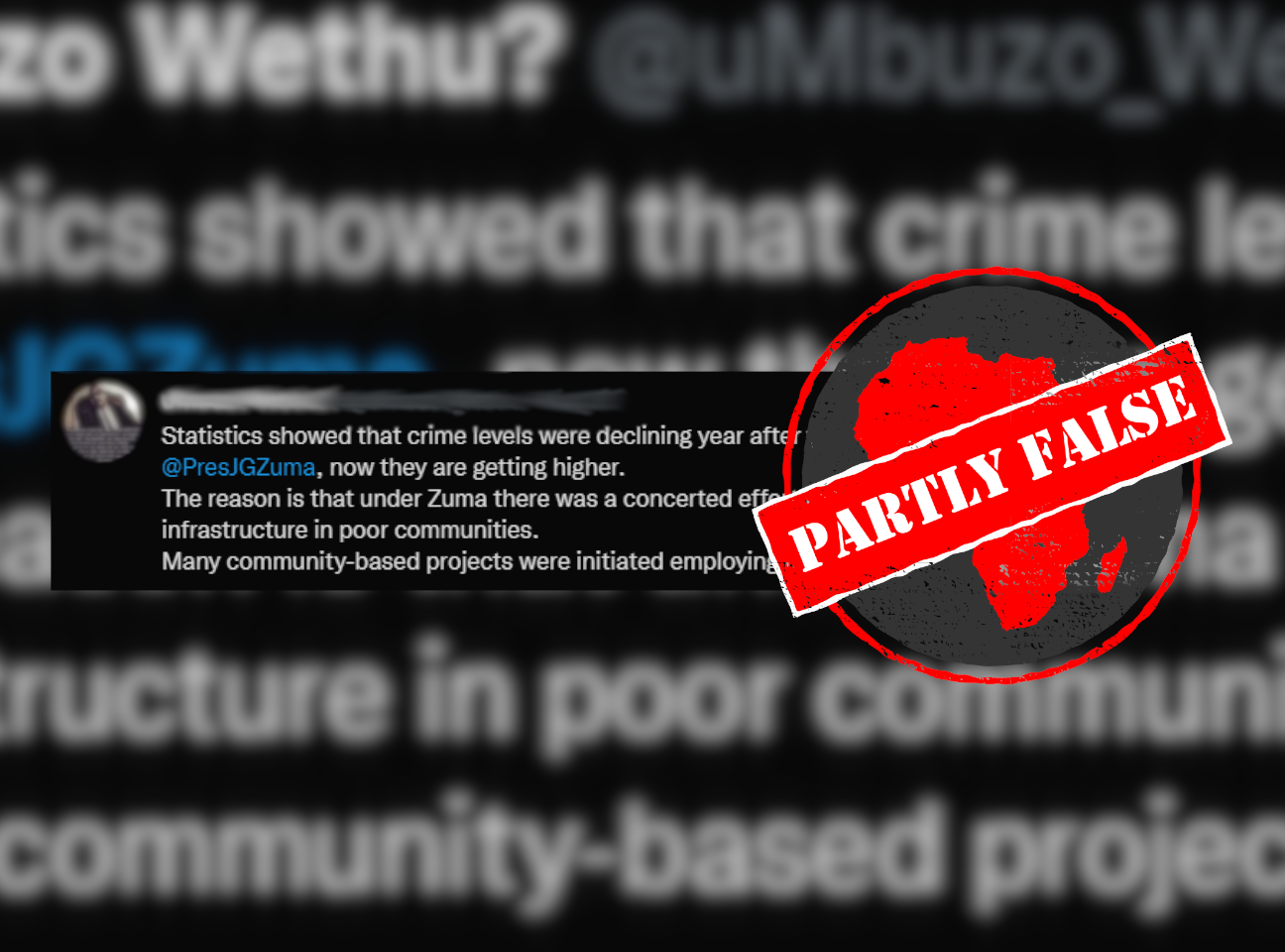 Gareth Newham, head of the Institute for Security Studies’ justice and violence prevention programme in Pretoria, told Africa Check the claim is “highly selective” and “patently false” if we consider the murder rate.

Murder is the “most reliable and accurate crime category” because it is easy to verify as there is a body. It did decline by 54% between 1994 and 2012, said Newham. This period included the early years of Zuma’s presidency, which began in 2009.

But Newham said these decreases were mainly because of “investments made in policing prior to when Zuma became president, in preparation for the Fifa World Cup in 2010”.

Newham said: “People in South Africa were more likely to be murdered or fall victim to armed robberies at the end of Zuma’s presidency than they were when he swore his oath of office.”

“Aggravated robbery also increased during Zuma’s presidency,” said Newham. Between 2009 and 2018 it increased by 14.4%.

Aggravated robbery is when a person unlawfully and intentionally uses a weapon to steal from another person.

Decrease in assault and sexual offences

Crime statistics showed an annual decrease in assault and sexual offence figures when Zuma was president.

However, assault and sexual offence crime statistics are often unreliable because not all victims report these offences to the police.

During Zuma’s presidency fewer victims reported crimes to the police, according to Newham. And from 2011, Statistics South Africa’s victims of crime survey showed a decrease in the public's approval of the police and willingness to report crimes.

The survey measures “the nature, extent and patterns of crime in South Africa, from the victim’s perspective”.