A Facebook post published on 6 April 2021 claims that a hotel in Bloemfontein in central South Africa allows tourists to experience living in a shack.

“A hotel in Bloem gives tourists the ‘poverty experience’,” the post reads. It includes four photos.

The first photo shows a shack-like building clad in corrugated iron, the second the interior of a bedroom and kitchenette. The third photo is of chairs made out of tyres set in a circle, and the final photo is an aerial view of what looks like shacks built in a circle around a central round structure.

The post has been viewed 1.9 million times since it was first posted.

Is there a hotel in Bloemfontein that offers tourists a similar experience for a fee? We checked. 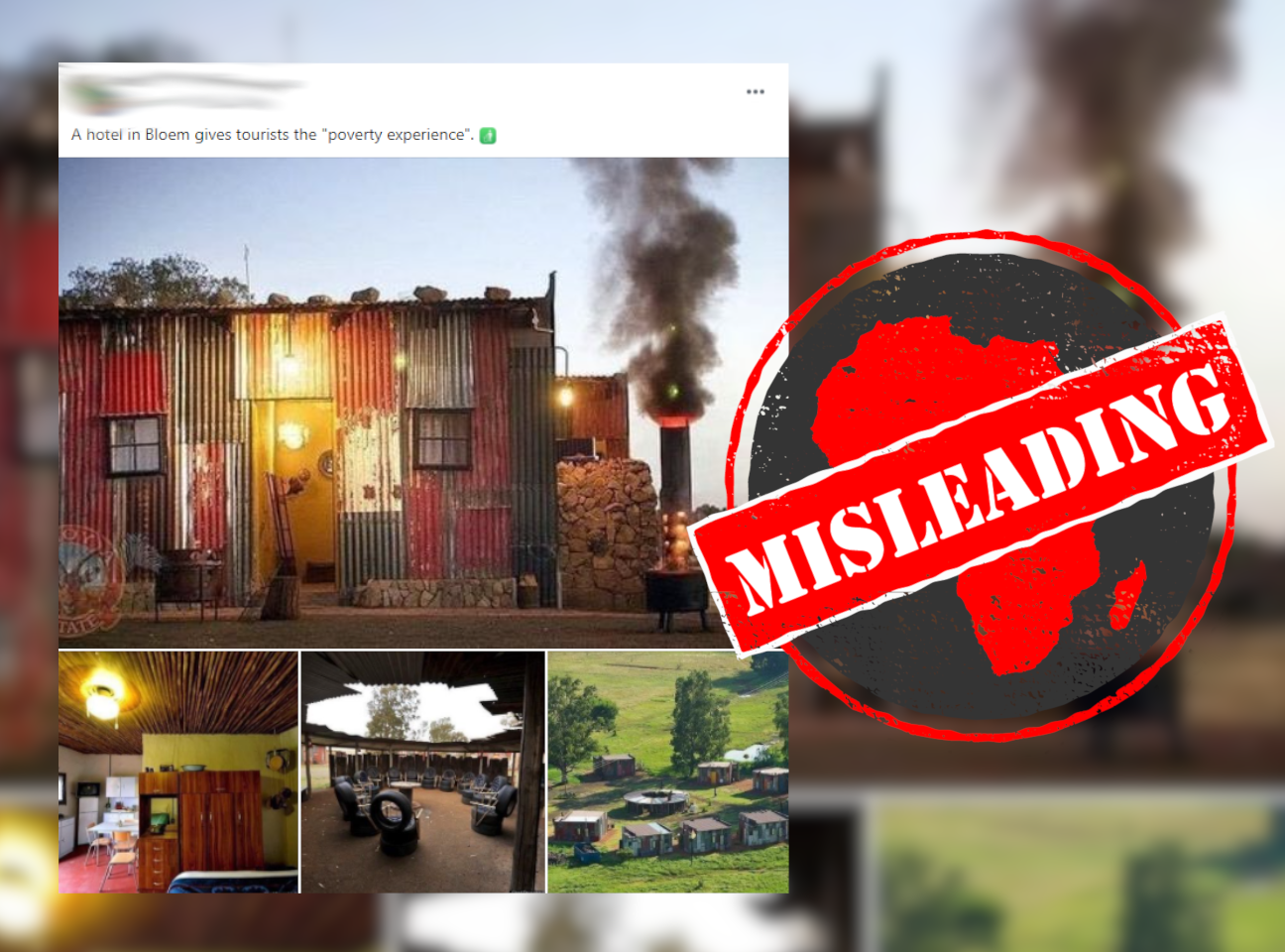 A reverse image search reveals that the photos date back to 2013. Two of the photos were included in a November 2013 article by citizen journalism outlet Global Voices titled: “Wealthy tourists can now ‘experience poverty’ in fake South African slum.”

The article reported that Emoya private game reserve, conference centre and spa in Bloemfontein had recreated a fake shantytown so that tourists could experience living in a slum in a safe environment.

The article quotes Emoya’s website, but the quotes don’t currently appear anywhere on the website, nor do any photos or references to the fake shacks.

Africa Check contacted Emoya to find out if the shantytown was real, and they confirmed it had been, but no longer exists.

“The shanty has not been with us for more than four years,” Emoya representative CS Anderson explained.

The fake shacks at Emoya were featured in news reports in November 2013 by local media outlet eNCA. They reported that the accommodation had been built ahead of the 2010 Fifa World Cup to give tourists an opportunity to sleep in a shantytown-like setting. It reportedly then cost R800 per night.

International outlets such as China-based media house CGTN Africa and US-based CNN also published photos and videos of the shantytown between late 2013 and early 2014.

The Emoya website does still feature a “shebeen sports bar”, which is described as having “a real shebeen atmosphere with bar, live music and a township atmosphere” and as the “ideal venue for your family and friends to experience a township experience in a safe and relaxing environment”.

But after widespread criticism, the fake “shantytown” no longer exists.

No, footballer Ronaldo isn’t turning his hotels into Covid-19 hospitals