A post on Twitter in November 2021 made a startling claim about the hospitality industry in South Africa.

It reads: “BREAKING NEWS: Dispite the outcry from South Africans and the fact that industries like Hospitality Employ 99% Zimbabweans while SA youth unemployment is at 74% The Presidency will extend #ZimPermits by another 5yrs. The official decision will be announced soon.”

The tweet has been shared over 50 times and “liked” over 100 times.

Are the statistics shared in the post correct? We checked. 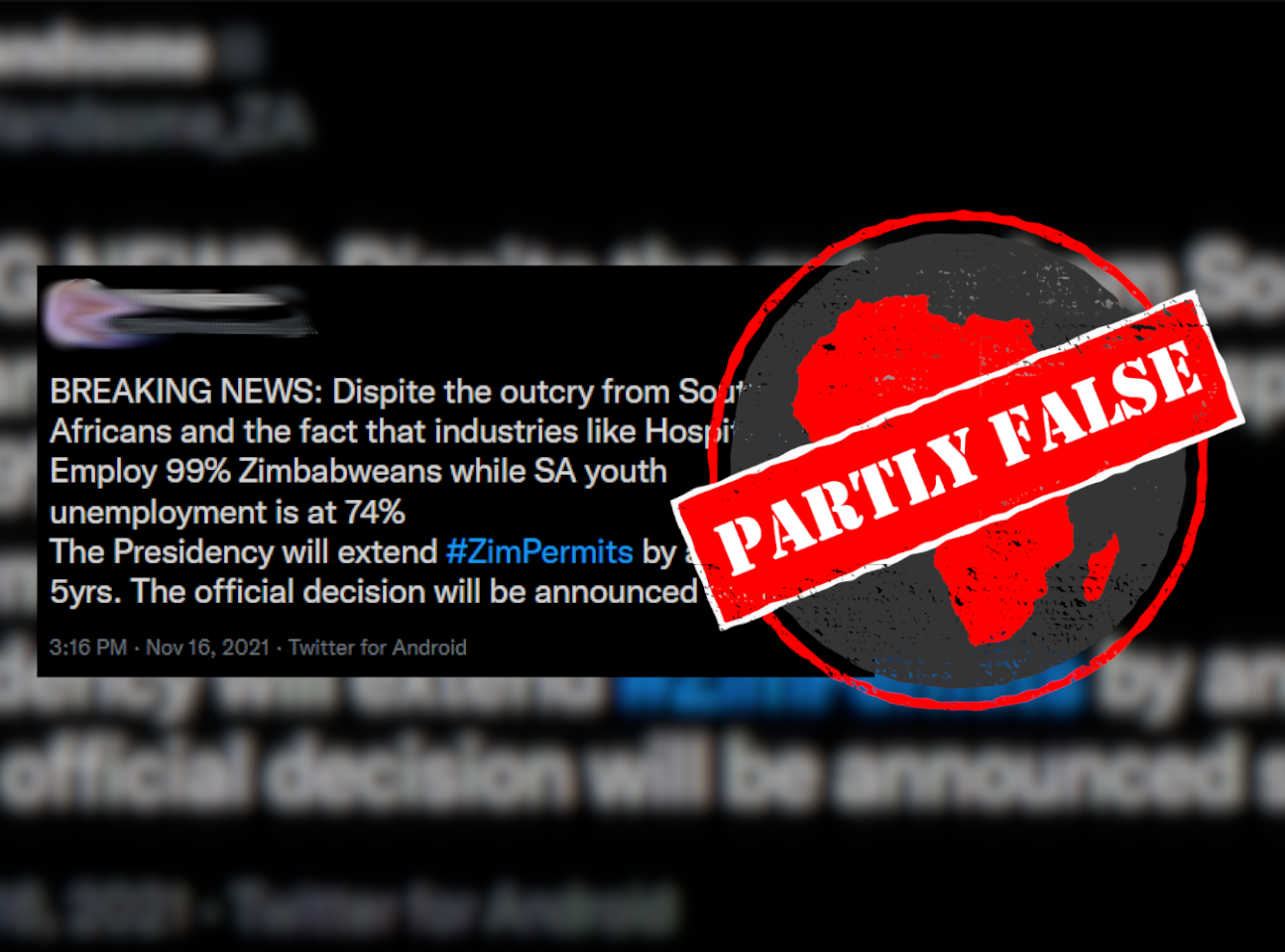 A number of special permits have been granted to Zimbabweans to reside in South Africa for work and study purposes.

In 2021 the Zimbabwean Exemption Permit Holders Association, which claims to represent 250,000 Zimbabweans, asked South Africa’s high court to declare them permanent residents. This would allow them to legally remain in the country.

There has been opposition to the application, with the hashtags #NoToZimWorkPermits and #PutSouthAfricansFirst trending online.

Only 6.5% of hospitality workers are foreign-born

In December 2020, Africa Check investigated a similar claim about the percentage of migrants working in the hospitality sector.

The Labour Market Dynamics report from Statistics South Africa (Stats SA) provides a breakdown of the country’s working population. According to the data, 5.3% of people of working age in South Africa in 2017 were born outside the country.

Stats SA provided figures for “housekeeping and restaurant workers”. It showed that 6.5% of the workers in this sector were foreign-born in 2017.

The claim that 99% of workers in the hospitality sector are Zimbabweans is false.

The post also claimed that “SA youth unemployment is at 74%”.

Definitions of “youth” vary. The United Nations defines a young person as someone aged 15 to 24.

According to this definition, the narrow youth unemployment rate was 64.4% from April to June 2021. This measures who are unemployed and have taken active steps to look for work. The expanded rate, which includes discouraged job seekers, was 74.8%.

Stats SA has previously told Africa Check that they define “youth” as people aged 15 to 34. When this group is considered, the narrow unemployment rate was 48.1% and the expanded rate was 58.5%.

The post’s claim about employment in the hospitality industry is incorrect. But the youth unemployment rate shared is accurate.