IN SHORT: A tweet claiming South Africa’s home affairs minister has given police the authority to spot check migrants’ immigration status has many in the country up in arms, comparing this to notorious pass laws from the apartheid past. But this authority isn’t new – police have this right based on a 20-year-old immigration act.

"BREAKING NEWS: Minister of home affairs Aaron Motsoaledi has given SAPS a green light to do spot checks like the rest of the world, to stop foreigners ask them to prove their immigration status to police," it reads.

The claim drew criticism of the minister, with one Twitter user asking: “Is Aaron Motsoaledi bringing back pass laws? How exactly do the police spot out foreigners? And how exactly do they do their checks without infringing on people’s freedom of movement and right to dignity?"

Before the first democratic elections in South Africa in 1994, successive white minority governments required black South Africans to carry identification documents at all times in attempts to control their movement. This pass was often referred to by the Afrikaans word dompas, particularly from 1948 onwards when these pass laws were part of apartheid legislation under National Party rule.

In a similar move, has democratic South Africa’s minister of home affairs given the greenlight for police to stop immigrants on the spot and conduct checks? 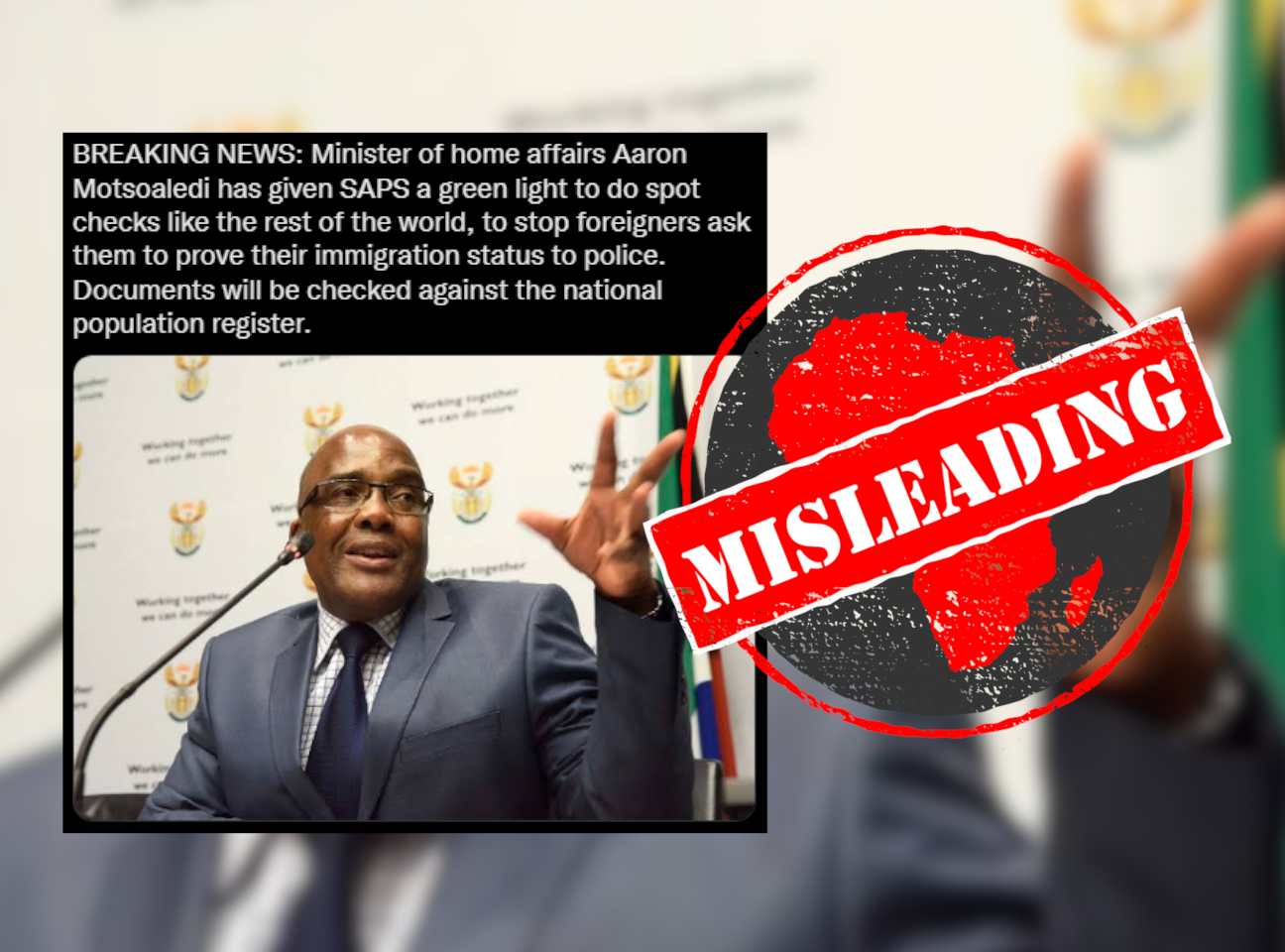 No ‘greenlight given’, minister was reiterating existing law

The source of the claim is a briefing by Motsoaledi to the South African parliament’s portfolio committee on home affairs on 20 September 2022.

In a recording of the briefing, Motsoaledi says: “We have a 2010 legacy project whereby police have got a right to stop anybody and ask them about documentation. It doesn’t have to be production of physical documentation like during apartheid days.”

“It means you are not forced to run around with documents in your pocket. But you can be checked here and there. If they phone that 24-hour system which we have. And we believe all our law enforcement officers must know that. Just so that we check you immediately on the national population register or on the NIS – it’s something that can be done on the spot".

Motsoaledi was answering whether an e-system existed for the verification of a migrant’s legal status in the country.

The “2010 legacy project” referred to in the recording is the Advanced Passenger Processing System which home affairs implemented when South Africa hosted the 2010 Fifa World Cup.

This was introduced to ensure secure traveller movement in and out of the country, as more visitors entered than usual because of the world cup. It also allowed authorities to proactively stop visitors at entry points, intended to avoid the expense of deporting anyone not in the country legally.

Saps don’t require anyone to provide a physical document, according to 2002 act

The department of home affairs has also released a statement calling the claim that the minister gave Saps the greenlight to conduct spot checks misleading.

According to the act, law enforcement officers do not need instruction or a "greenlight" from the home affairs minister to ask any person about their legal status in the country.

"Any law enforcement officer who wants to verify the identity of a person on the spot does not necessarily need to have a physical documentation of that person. If they are given an ID number or passport number or any documentation number, they can phone the 24-hour centre and the identity they are looking for will be verified," the department’s statement continued.

Based on the recording as well as the minister’s own admission, the claim circulating on Twitter is misleading. The minister didn’t give police the authority to conduct spot checks on people’s immigration status – Saps already had this.

No, there are not 26 million migrants in South Africa

Over 2,000 phoney marriages reported in South Africa, but only 1,160 ‘truly fraudulent’

Are Nigerian immigrants top of the class in the US?

The Organization for the Advancement of Nigerians claimed that Nigerians are the most educated immigrants in the US. We checked their claim.