Does this photo of a nebula of stars look like a skull? If it does to you, you’re not alone. The photo was posted on the Facebook group “Things with Faces” along with a caption: “Rosette Nebula, 5 000 light years from earth, as captured by Hubble 💀”.

But is this true? Twitter accounts dedicated to spotting fake or out of context images like HoaxEye and PicPedant regularly debunk images of objects in space. And Facebook’s fact-checking system has flagged the post as possibly false.

Is the Rosette nebula real, and does the photo show it? 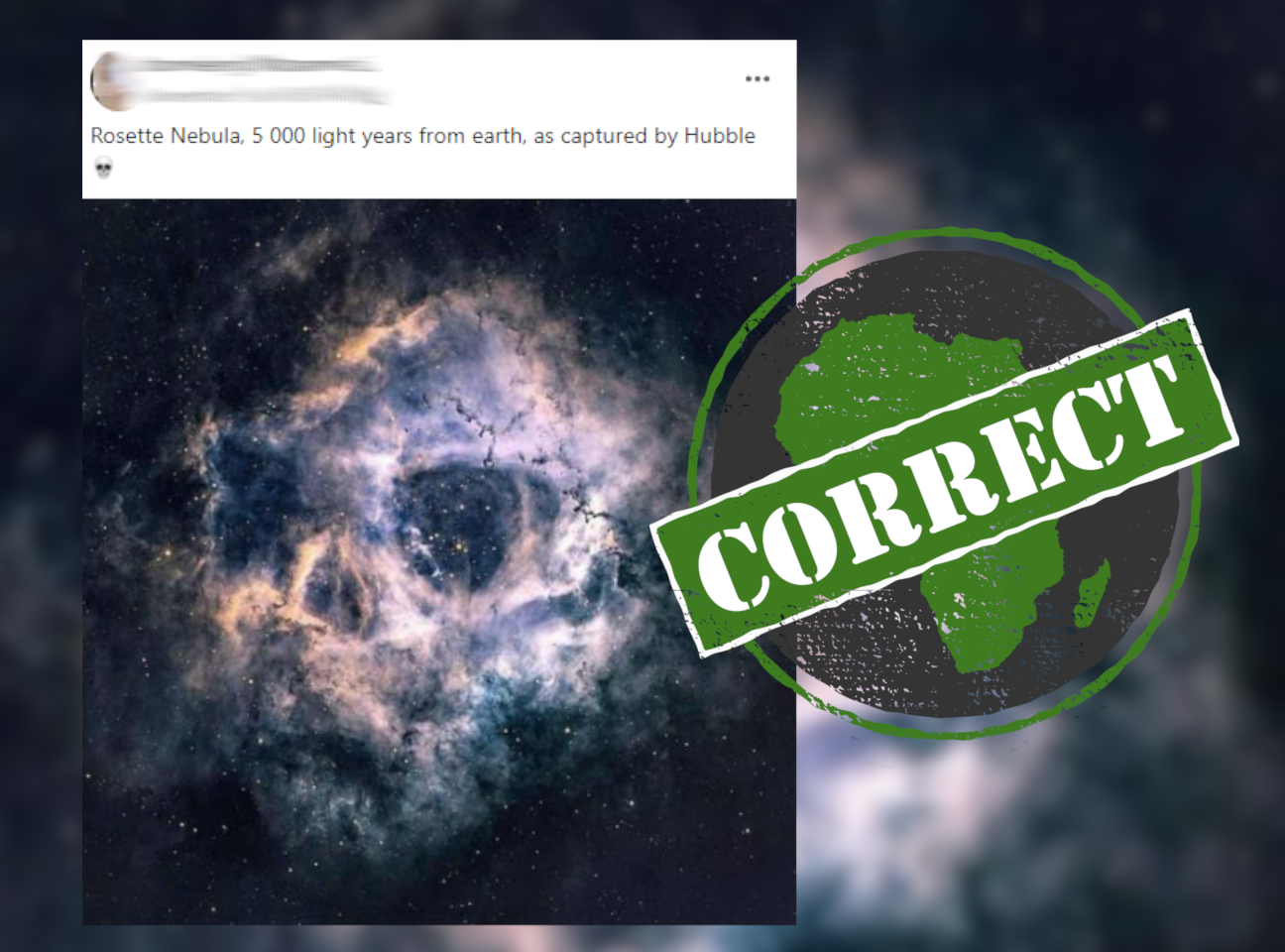 The powerful Hubble space telescope orbits the Earth. It is managed by several organisations, the main one being the United States of America’s National Aeronautics and Space Administration, or Nasa.

The Hubble is known for its striking images of objects in space, including star-forming clouds of gas known as nebulae. That’s the plural of “nebula”, the Latin word for “cloud”.

The Rosette nebula is a real nebula, around 5,000 light years (more than 40 quadrillion kilometres) from Earth. That means the light seen in photos of the nebula left Rosette about 5,000 years ago, before Egypt’s Great Pyramid of Giza was built.

And Nasa photos of the nebula do match the one in the Facebook post. So most of the information in its caption is correct.

But the photo wasn’t taken by the Hubble. It was snapped by named Curtis Morgan, an amateur astrophotographer.

Morgan posted the photo on Instagram in May and November 2019. He has shared other photos of the nebula, although they have slightly different colouring and its skull-like features aren’t always as clearly visible.

The problems in photographing space

These changes in colouring are not evidence that these photos have been altered, or do not show the “real” Rosette nebula.

Photographing space is complicated. The Hubble telescope, for example, can’t capture a colour image. This is because the telescope’s image sensor can’t distinguish between different colours of light. Instead, it takes several black and white photos through filters that allow only specific colours of light to pass through. These images are then assigned a colour and merged into the final photo.

This process does not necessarily replicate what a human eye would see. In fact, astronomers often deliberately colour images to show light that isn’t usually visible to the human eye, or to highlight specific details rather than accurate colours.

As astrophysicist Paul Sutter has written, telescopes will always provide a view of the universe that is different to what your eyes would see. So Morgan’s photos of the Rosette nebula might differ from what a human eye would see (and certainly differ from one another) but since the features they show match Nasa photos of the nebula we can safely say that they are accurate.