An image warning South Africans that criminals are using coloured stickers to mark properties from which dogs can be stolen is doing the rounds on social media.

It says dog-snatchers use a red sticker to mark properties with big dogs, yellow for medium dogs and pink for small dogs.

The image even uses the logo of the SPCA  - the Society for the Prevention of Cruelty to Animals. 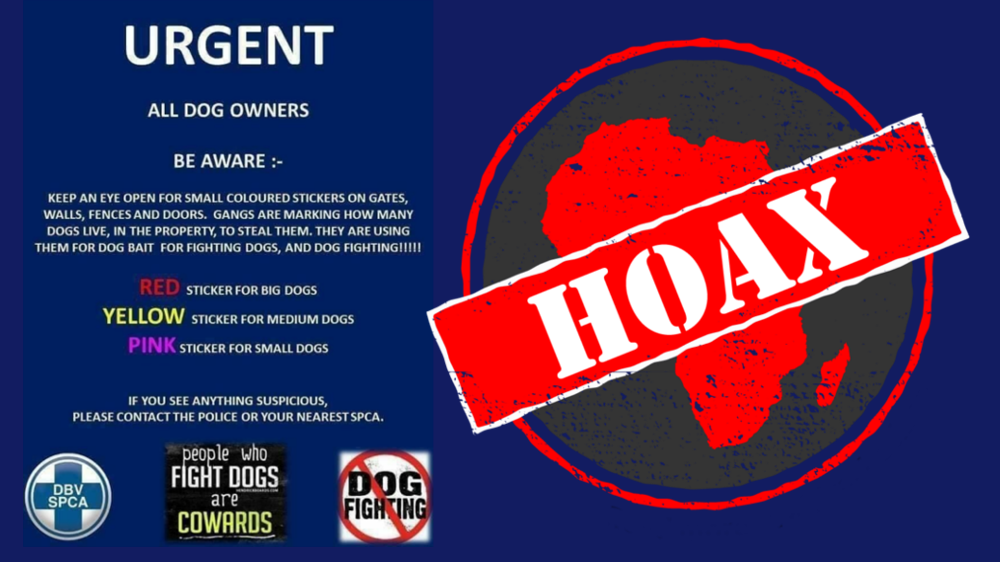 But there’s no indication that dog-nappers are marking houses in this way, as Africa Check found in 2017. At the time, we spoke to the National Council of SPCAs (NSPCA). Spokesperson Christine Kuch said there was “no indication of this happening in South Africa” and added that “the linking of the SPCA name to the poster is misleading and unauthorised”.

The NSPCA confirmed the unapproved use of their logo as recently as 18 January 2019 and urged people not to share the post.

A fact-check by Snopes.com suggests this “warning” originated in Perth, Australia, in February 2013.

This is not to say that the theft of dogs does not occur in South Africa, Kuch said. “We urge all owners to take responsible steps including microchip identification of your animals.”

The Alberton SPCA recommended keeping dogs indoors at night and away from the street in a comment to the Alberton Record and Comaro Chronicle. The newspaper article questioned the poster’s origin in June 2016.