“President Samia raises new hope for the Scottish and Tanzanian economic cooperation,” reads the front page headline of what seems to be the 1 November 2021 edition of the Scotsman, a national newspaper in Scotland. The page has been widely shared on Facebook and Twitter.

It shows a photo of Samia Suluhu Hassan, Tanzania’s president. On 1 November, Samia was among global leaders gathered in Glasgow, a major Scottish city, for the UN climate change conference held from 31 October to 1 November.

Text below the headline reads, in rather unjournalistic language: “Tanzanian President Samia Suluhu Hassan is in Scotland and shall meet the UK envoy in continuation of discussions regarding development of both nations through the Technology and Industrial sectors.”

It adds: “This spells opening up countries after the Corona-Virus pandemic slices World's economies into pieces, PM Borris Johnson is expected to sign new contracts on business with Tanzania.” 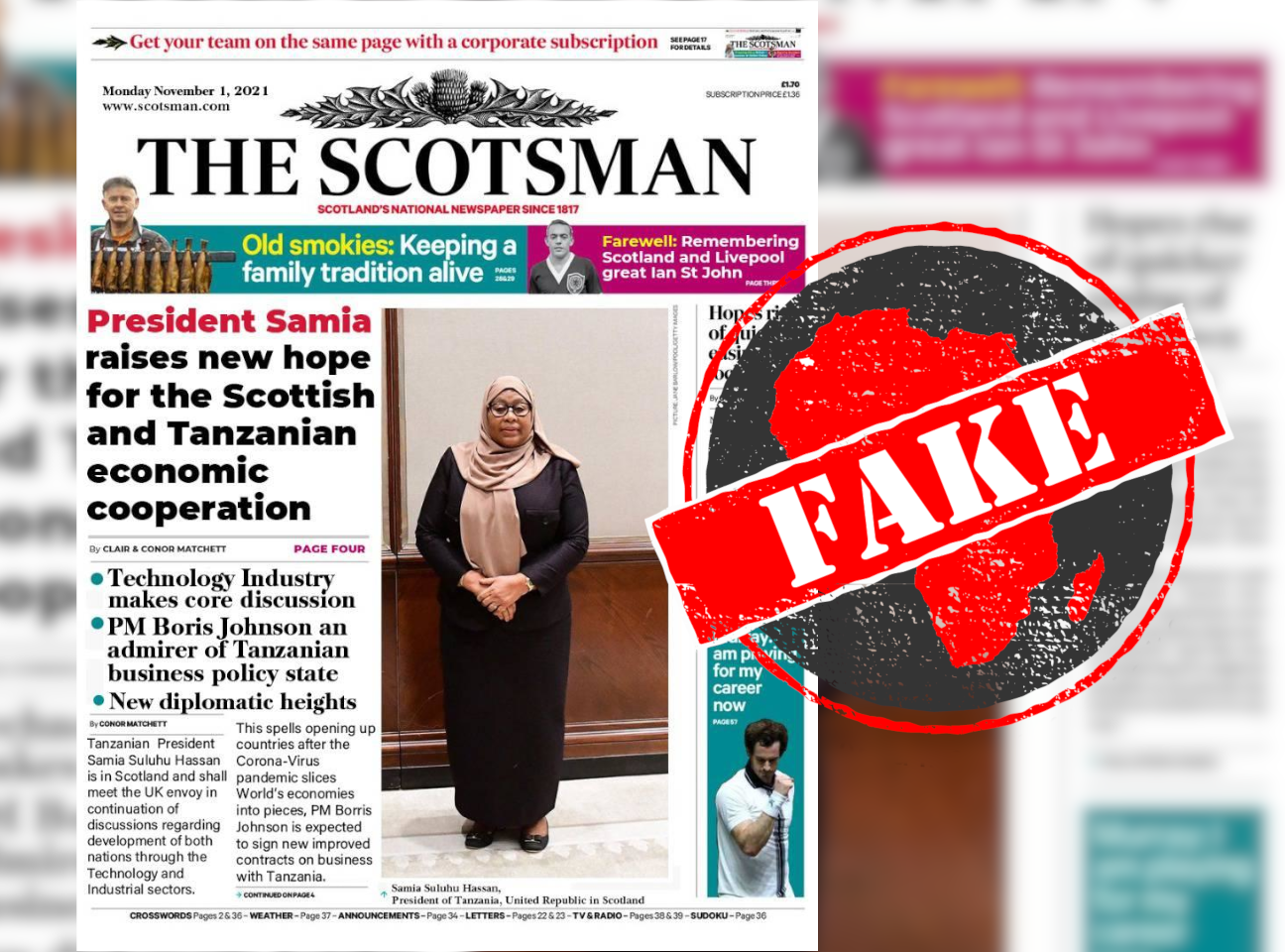 The page has been picked up by several public Facebook groups in Tanzania, with hundreds of thousands of combined members. It’s often shared with the hashtag #SisiTumekubali, which means “We have accepted”.

Facebook users have heaped praises on Samia for being “published” in the newspaper, saying it shows she is “being respected world over as the one leading the country the way the nation’s founding father wanted” and that she is the “first African president ever to appear at the front cover page of a Scotland newspaper”.

But given its poor spelling and grammar – UK prime minister Boris Johnson’s first name is misspelled as “Borris”, for example – is this really the genuine front page of the Scotsman’s 1 November issue?

A Google reverse image search reveals that it’s actually a doctored version of the Scotsman’s front page for 3 March 2021.

We found it in the BBC’s daily archive of Scottish newspapers. Two smaller articles on the right, about Covid lockdown and tennis star Andy Murray, are the same.

On 3 March, the Scotsman’s front page headline read: “Sturgeon faces calls to quit over new Salmond revelations.” All the highlights on the page are about Nicola Sturgeon, Scotland’s first minister and leader of the Scottish National Party. There is no mention of Samia.

And the Scotsman’s 1 November issue is completely different.