Ten thousand US troops set to invade South Africa? No, around 50 soldiers in country for joint military exercise

Has the United States sent 10,000 troops to invade South Africa?

The claim started circulating online in mid-July 2022. Most versions use what seems to be a screenshot of a news clip showing a US air force plane. The text “10,000 TROOPS EXPECTED TO ARRIVE OVER NEXT TWO WEEKS” runs across the bottom of the screen.

A header has been added to the screenshot: “10,000 US SOLDIERS IN SA. DEPLOYMENT OR TRAINING?”

It’s been posted with some alarming statements.

“Media reports say 10 000 US soldiers are expected in South Africa in the next two weeks. It is being dubbed a military exercise but it looks more like a Russia style military deployment in a US proxy,” reads one Facebook post. It ends with the hashtag #BeConcerned.

A tweet with the screenshot reads: “Ramaphosa has Sold us. What are 10000 US Soilders doing in S.A”. Cyril Ramaphosa is South Africa’s president.

The screenshot has also appeared here and here. Comments include “America is invading our country” and “Things are about to get worse.”

Another post goes further. “We have 10 000 USA Troops here SA, 7 000 of them will be deployed in KZN from Saturday 16 July.” It adds: “Be Careful SAns US Troops might kills lots of civilians in KZN.” KZN is South Africa’s KwaZulu-Natal province.

And a YouTube video claims that Emmerson Mnangagwa, president of neighbouring Zimbabwe, “fears Military invasion as US deploys 10 000 troops to South Africa”. 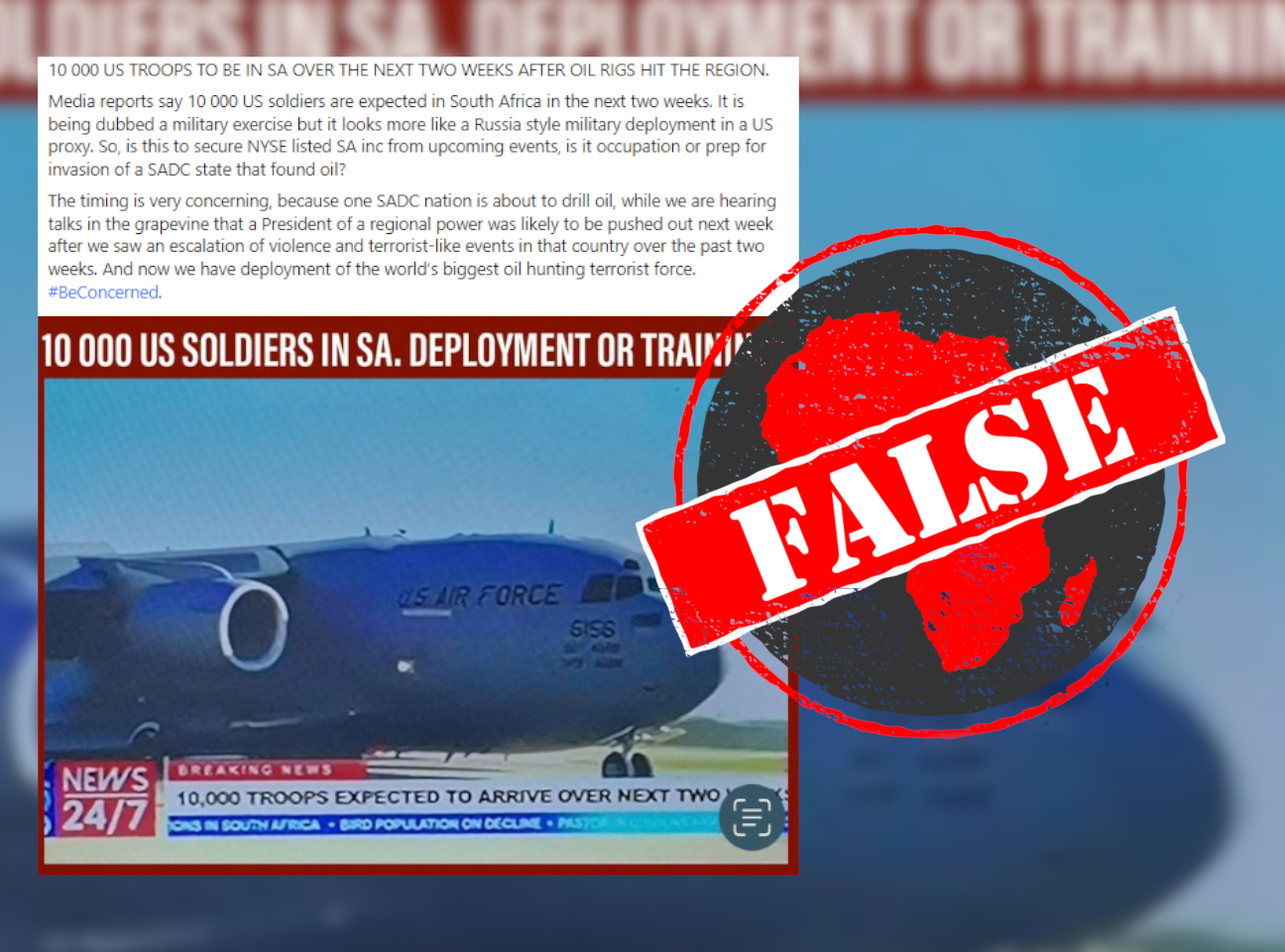 Handful of US army troops join Exercise Shared Accord

In a 5 July media statement, the South African National Defence Force (SANDF) announced that US army troops would be arriving in South Africa. But it did not say that 10,000 soldiers were expected. We could not find any credible evidence of this number. According to security and defence news outlet DefenceWeb, the actual number is just 50 or so.

In a later statement dated 14 July, the SANDF responded to speculation about why the US troops were coming to South Africa. Some social media users had apparently claimed that they were going to “protect government officials”.

The SANDF called the claim “ludicrous”. It said the US troops would be arriving “for a joint exercise, and not for any other agenda as speculated on social media platforms”. Local news outlets were also quick to debunk the claim, as seen here and here.

US troops are in South Africa to take part in Exercise Shared Accord. It’s been held three times before, in 2011, 2013 and 2017. The exercise began with discussions between the two countries in 2009. South Africa’s Military Command Council approved it a year later.

This year’s exercise was originally scheduled for 2020, but delayed by the Covid-19 pandemic. It is being held in and around the KwaZulu-Natal city of  Richards Bay, and is set to end on 27 July.

The SANDF Facebook account posts regular updates about the exercise, which has included humanitarian work and enactments of combat scenarios.