On the night of 11 August 2022, Dennis Itumbi, a digital strategist working for the campaign of Kenyan deputy president William Ruto, claimed party officials had been “arrested” or “kidnapped”.

Ruto is the leader of the United Democratic Alliance, or UDA. “BOMAS” refers to the Bomas of Kenya, a cultural venue. The Kenyan electoral commission used the venue’s auditorium to tally the votes in the 2022 Kenyan general election.

But was the duo arrested or kidnapped as the tallying of the presidential votes went on? 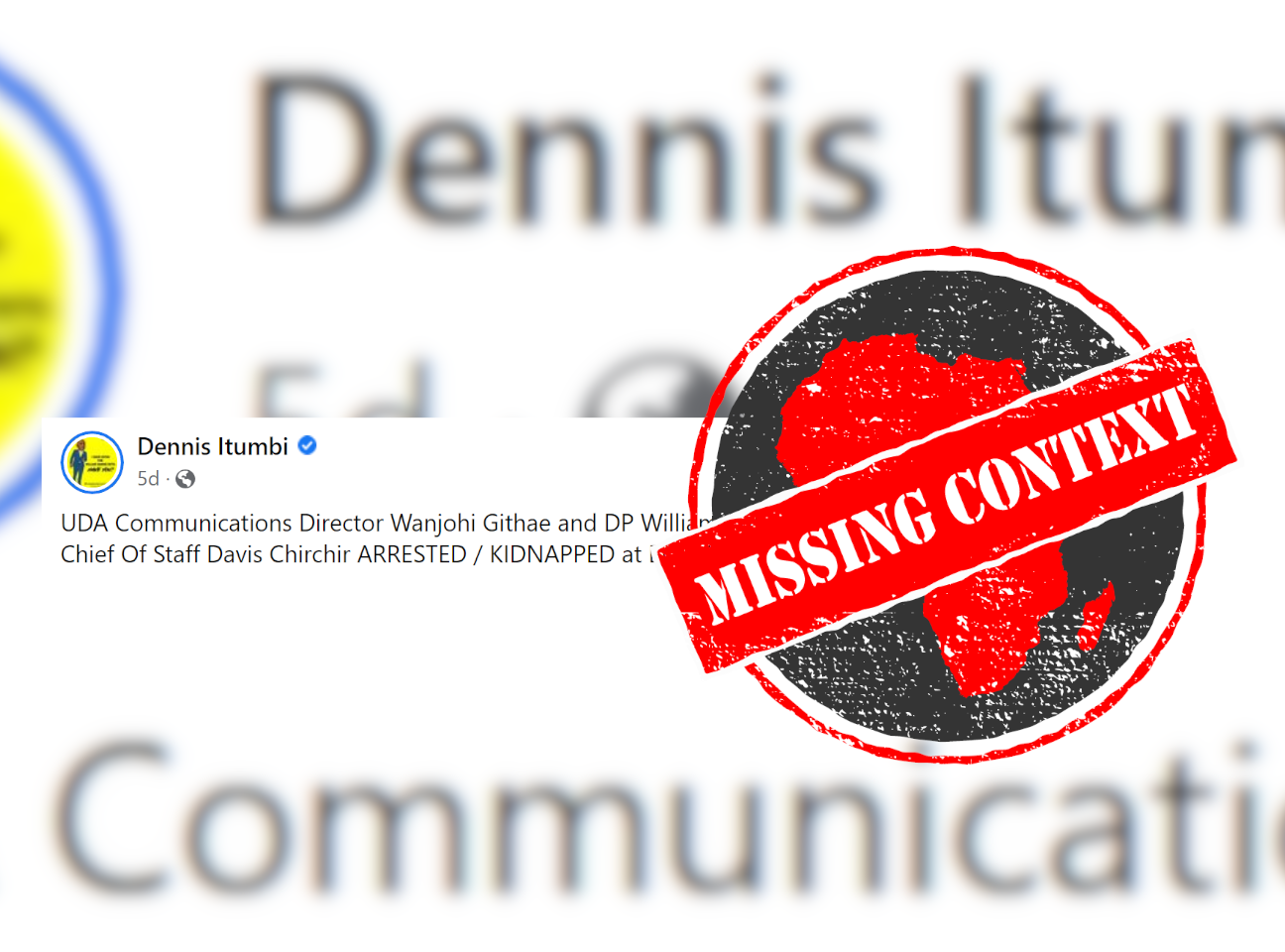 A few minutes after Itumbi posted the “arrest/kidnap” claims, Githae posted on Facebook that “Waziri Chirchir and myself are safe”.

“Waziri” is Kiswahili for “minister”. Chirchir is a former energy minister.

Githae then published a photo showing him and Chirchir at the Bomas of Kenya auditorium.

After that post, Githae posted a description of the events which led to the claims. He said Chirchir’s car was blocked in what looked like a minor collision on the road. He asked Chirchir to get into his car as the drivers involved in the accident handled the issue.

“[Chirchir] asked me to carry his laptop. Upon entering my car it was surrounded by cops. They had green combat uniform and they ordered the driver out. We were left with Waziri. The uniformed officers gave way to their seniors in suits. I immediately called a colleague to raise an alarm. It was clear we were under arrest and it was not an accident but Waziri's car had been intercepted,” Githae said.

“They asked us to switch our phones and hand over our laptops. They searched both cars.”

‘Issue was over in 25 minutes’

Itumbi later posted a YouTube video of a phone recording in which Githae spoke in Kiswahili about the incident. Githae republished Itumbi’s post on his Facebook profile. This recording matches the sequence of events Githae posted.

“The whole issue was over after 25 minutes,” Githae said.

Githae confirmed they were accosted, briefly detained, told to switch off their phones and had their laptops impounded. They were also questioned by the uniformed police officers, some in plain clothes.

However, Githae and Chirchir were not arrested or kidnapped, and were let go in under 30 minutes.

A Kenyan electoral officer went missing on 11 August and was found dead on 15 August. Other staff of the electoral commission were also arbitrarily arrested and as of 15 August their whereabouts were unknown. Therefore, claims of arrest or kidnap during election season are taken seriously.