A screenshot shared widely on Facebook in South Africa claims recently appointed US vice president Kamala Harris was once a “high-end call girl”.

The Afrikaans caption to the post reads: “Een van die dae is USA ook in die gutters!” This translates to: “One of these days the USA will also be in the gutters.”

The screenshot appears to be of another Facebook post, with a larger caption in bold superimposed or pasted onto the bottom part of the image. A photo shows a couple in formal dress.

The same screenshot has also been shared on Twitter.

The smaller caption to the original post is hard to read, but says: “Harris got her start in 1994 by having an affair with Willie Brown, who was serving as the California Assembly speaker and then became the mayor of San Francisco. Brown was 60 years old and Harris was 29 when their affair began. Harris was so brazen that she came out publicly as his date at his 60th birthday party, despite his wife of 36 years being in attendance.”

What was the relationship between Harris and Brown, and is it at all accurate to portray Harris as a sex worker? We checked. 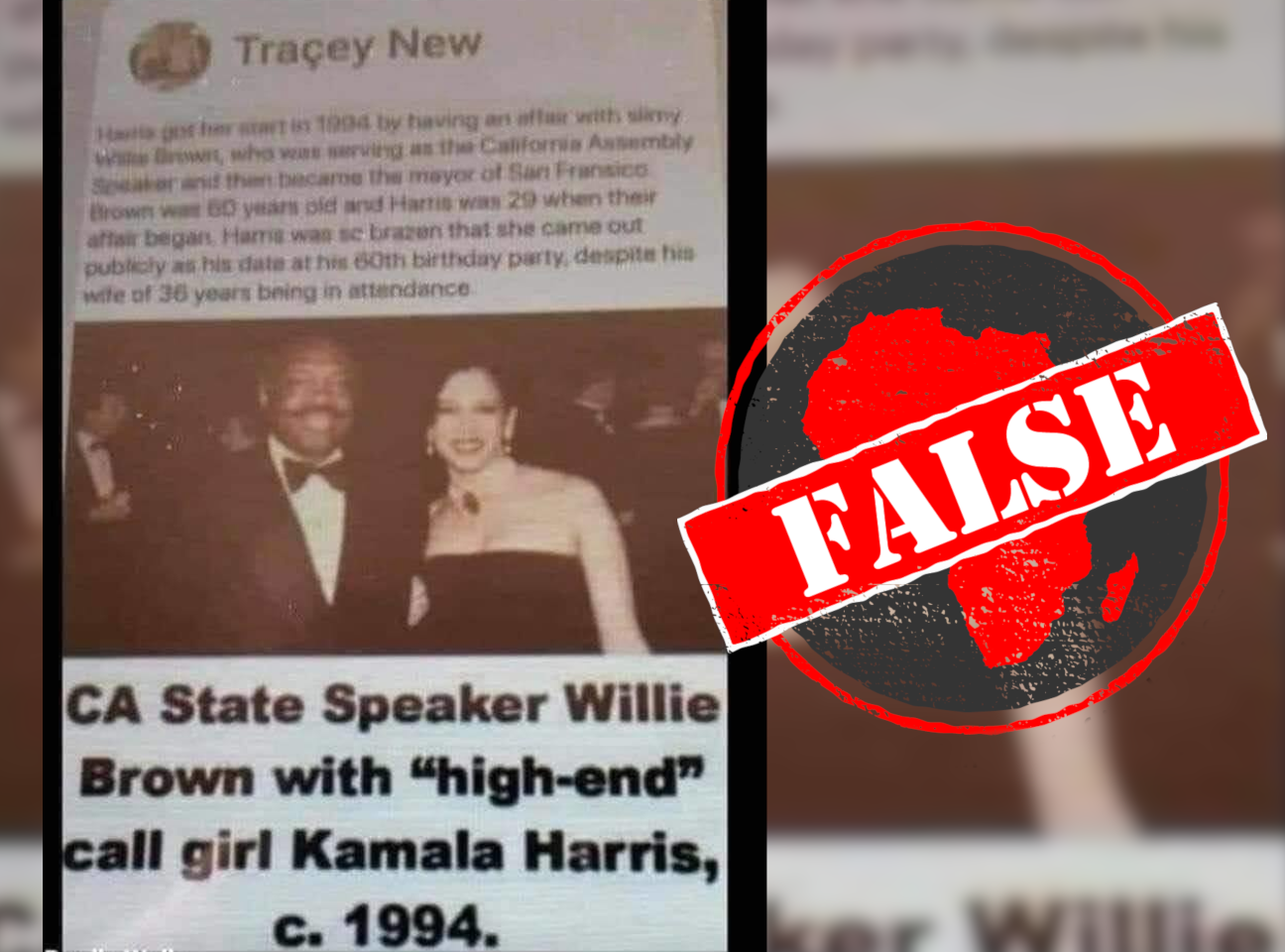 Willie Brown was the first African American speaker of the California state assembly and a two-term mayor for the city of San Francisco between 1996 and 2004. He’s well known for his longtime influence in California and San Francisco politics.

Before becoming the first black female Asian-American vice president of the US in January 2021, Harris served in the US senate and as attorney general of California.

In an article in the Los Angeles Times in 1994, Harris was referred to as Brown’s “frequent companion” and “former law associate”. It says Harris “was described by several people at the [California] capitol as Brown’s girlfriend”.

In a 2019 article on Harris’s start in politics, the right-leaning Washington Examiner also referred to Brown as her boyfriend.

According to reports at the time, Harris and Brown met in 1994 when he was the speaker of the state assembly. She was 29 years old, he was 60.

They apparently broke up in 1995. But their affair, while it lasted, was out in the open and they attended high-profile public functions as a couple.

Brown reportedly separated from his wife, Blanche Brown, in 1981.

When Harris campaigned for the position of San Francisco district attorney in 2013, her former relationship with Brown was often raised.

She then described her relationship with Brown as an “albatross hanging around my neck”, because of anxiety that voters who disliked her ex might therefore not vote for her.

After it appeared Harris would run for the Democratic presidential nomination, Brown wrote an op-ed in the San Francisco Chronicle in January 2019, published under the headline: “Sure, I dated Kamala Harris. So what?”

"Yes, we dated. It was more than 20 years ago. Yes, I may have influenced her career by appointing her to two state commissions when I was assembly speaker,” Brown wrote.

There is plenty of evidence that Harris and Brown were openly dating in 1994, and both have confirmed the relationship. The suggestion that Harris was a sex worker is simply slander.