“White farmers in #SouthAfrica get whipped and have their cars stolen as the country descends into mass-looting frenzy,” reads a tweet posted on 13 July 2021.

The tweet includes a short video which appears to have been filmed in a rural area in South Africa. In it, a black man threatens two older white men with a whip. He yells “my money!” in response to something one of the white men says.

A woman, who is possibly the person filming, can be heard yelling off-camera “No, hey, hey, do not be aggressive!”. As a large vehicle starts driving away one of the white men asks “where are you going? That’s my car”. The whipping continues and the woman yells “Mr Tambo, no!” before the video ends.

Protests erupted in South Africa after former president Jacob Zuma went to jail on 7 July 2021, to serve a 15-month prison sentence for contempt of court. Protesters have blocked roads and there has been wide-scale looting of stores in KwaZulu-Natal and Gauteng provinces.

But does this video, which has been viewed over 900,000 times, show an attack on white farmers amid the civil unrest? We checked. 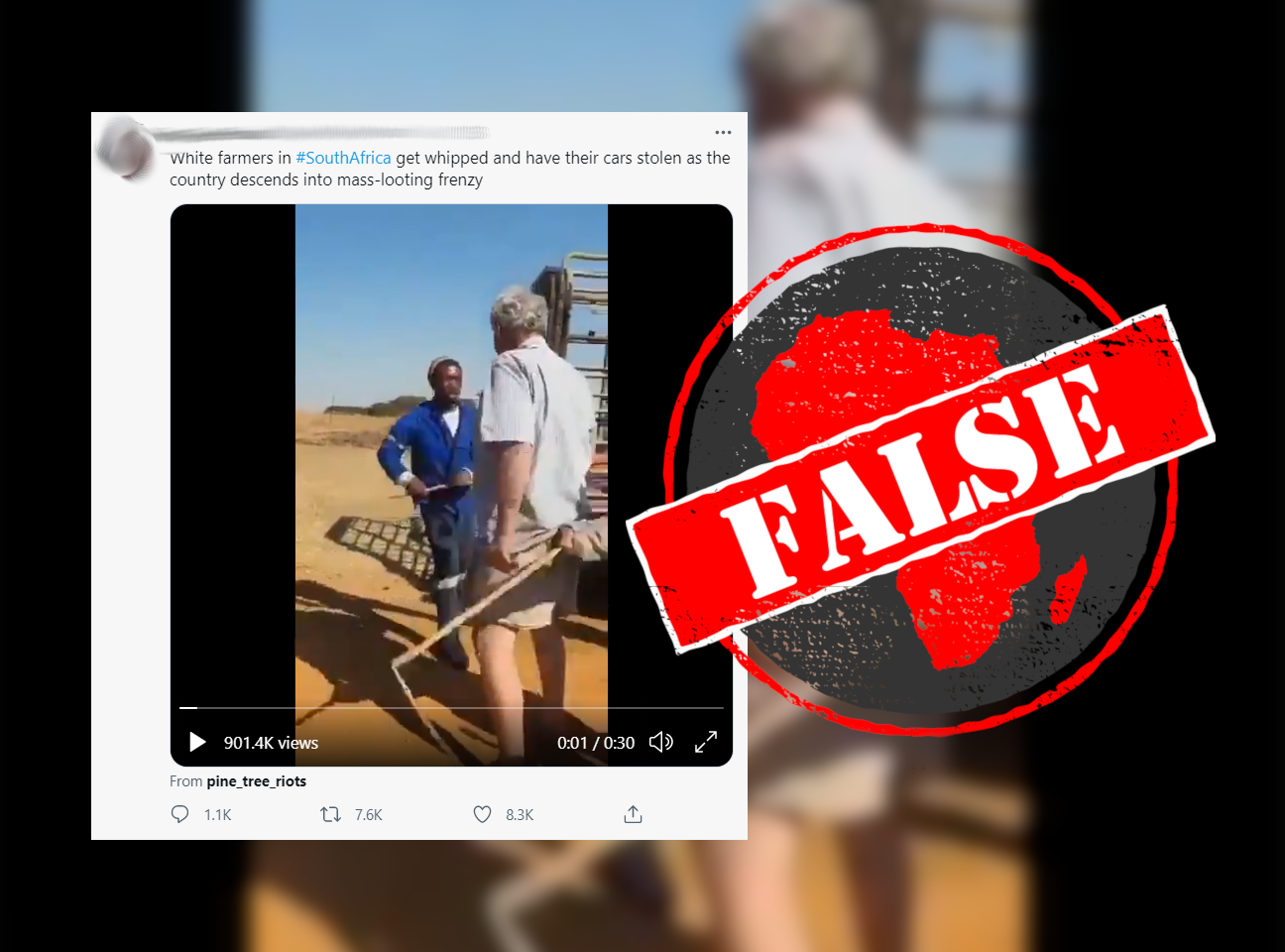 The earliest example of the video we could find was posted on Facebook on 26 June. But the current wave of protests in South Africa only started after Zuma was taken into custody on 7 July.

The original post gives no clues to who the people are, where the video was filmed, or any other context.

Some tabloid outlets such as Opera News and Africa Updates republished the video and claimed that the white men were attacked because of unpaid wages.

However, neither outlet provided details about when and where the video was filmed or identified the men in the video. (Note: Africa Check has previously debunked multiple reports by Opera News.)

Although no information is provided, there are a few context clues in the video itself.

The license plate of one of the vehicles is from Mpumalanga province. This northeastern area has been less affected by the protests, though roads have been barricaded and there have been some incidents of looting. But we could find no evidence that farms have been targeted.

The one man yells “my money” and the woman appears to identify him by name – “Mr Tambo”. This seems to indicate that the people in the video know one another and could support the theory that the incident was spurred by a wage dispute.

News outlets have reported that farmers have been affected by the protests by transport routes being disrupted, sugar mills shutting down, cane farms being set alight and livestock being stolen.

But we could find no examples of farmers reporting that they had been assaulted by protesters.